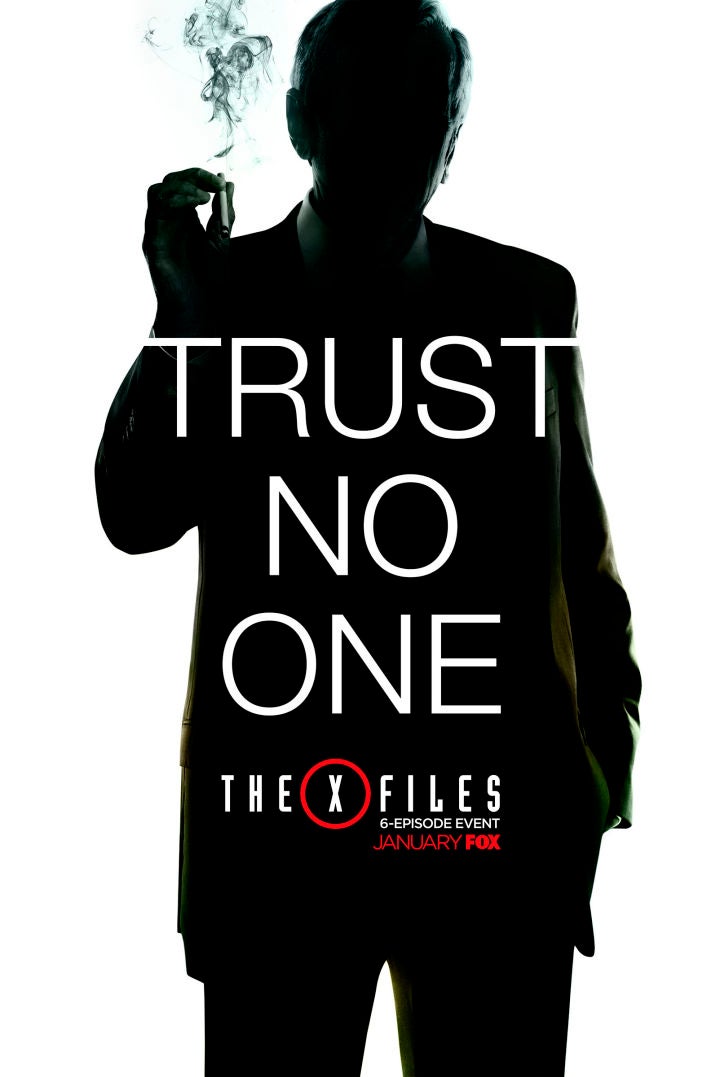 Now I’m really excited for the return of the X-Files! I loved the episodes with the Smoking Man.

I never got into this series, mainly because when it was on, the broadcast rights to Fox were a little weird. So, you had to have a certain cable system to even get Fox before a local broadcasting group got the rights to Fox.

In the middle of nowhere maybe.

So this happened last night.

What did you all think? I guess it was a good start to restart the series. Even with David Duchovny’s wooden acting.

completly forgot this was on. Need to download it.

I just caught the two opening episodes, and it wasn’t bad. It was missing something, tho. Mulderand Scully were definitely stiff. There was a scene in the second where I was appalled that they even put it on tv. It was that bad. But for the rest of it, it is nostalgic. Doesn’t beat some of the good episodes of the original series, but was a good take.

Anyone watching these? I’m a bit confused, why did they bring this series back? So far it’s only been 1 off episodes, monsters of the week. I thought they were going to go right into the whole conspiracy thing again. Don’t get me wrong, the shows have all been good. I just don’t see the need to return to the X-Files. So far it’s been nothing new. I think the next episode is the last in the season.

They turned this show into a goofy version of the original. I hate it

WTF did I just watch??? 6 episodes for this run. 1st to kick off new “conspiracy”, 4 filler episodes and a final that crams 3 episodes into one mess of a show? I was hoping for better.

Sadly, this may be the end of the X-Files. Even with a cliff hanger, I’m not sure there is a 2nd season. So in the end, what was the point in bringing back the show?

It is pulling enough of a rating to be brought back. I am not sure how long we will have Mulder and Scully. I believe Miller and Einstein are being groomed to replace them. As for the ending…my wife just laughed at me as I started yelling you dirty mother fuckers this is how you are going to leave it.

It is pulling enough of a rating to be brought back.

That’s far from definite. There’s talks of a season 2.

If there isn’t, what was the point of season 1 (this year)? Last episode was a giant shit show. Utter garbage.

So true. I was really hoping these 6 episodes were going to be more like a love letter to fans and see one, maybe two major story arcs. Instead, it felt like practice - practice for the writers and actors and crew to go on and do bigger and better things later in their careers. I don’t know what was going on.

Working in this industry I get a bit more info even before it hits the trades. Here is what I know as of yesterday. They are looking at a second season. Ratings did well nationwide. They are working a deal that would not include Scully and Molder in every episode…they want to be back in but not for 24 show series. Look to see the 2 new agents introduced to take on a more major roll with the 2 vets sprinkled in to continue the main story line.

So, we’re eventually looking at a 24 without Jack Bauer, and an X-Files without Mulder and Scully? Great.

Next up: Married with Children without the Bundy family.

It still doesn’t answer the question of Why???

Seriously, the 6 episodes sucked at best. Last episode was utter garbage. I had hoped for better but that didn’t happen. Really disappointed with how the season played out.

I like what they put out. The last episode was crazy and did seemed rushed, but I still enjoyed it.

Watched last night’s episode. I’m really not sure why they brought it back and if so, why can’t they tell a proper story. What a clusterfuck.