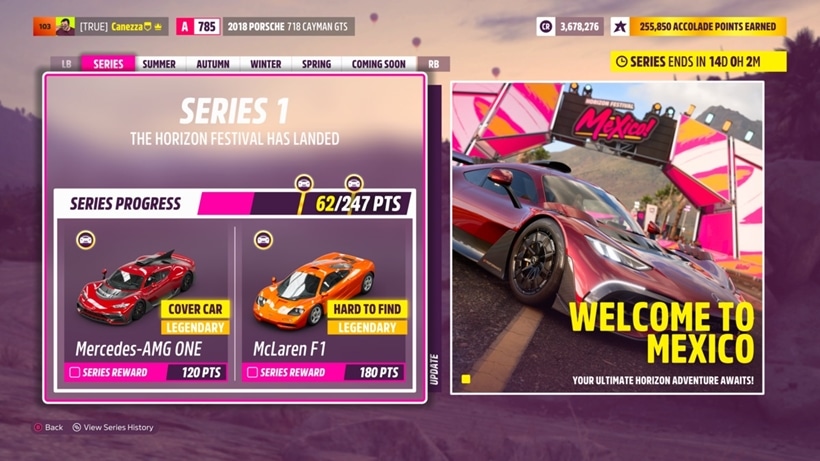 Forza Horizon 5’s first series offers up some pretty exciting rewards. In Series 1: Welcome to Mexico, accumulating 120 points across the series will net you FH5’s cover car, the Legendary Mercedes-AMG One. If you manage to collect 180 points, you’ll bag yourself the hard-to-find Legendary McLaren F1. 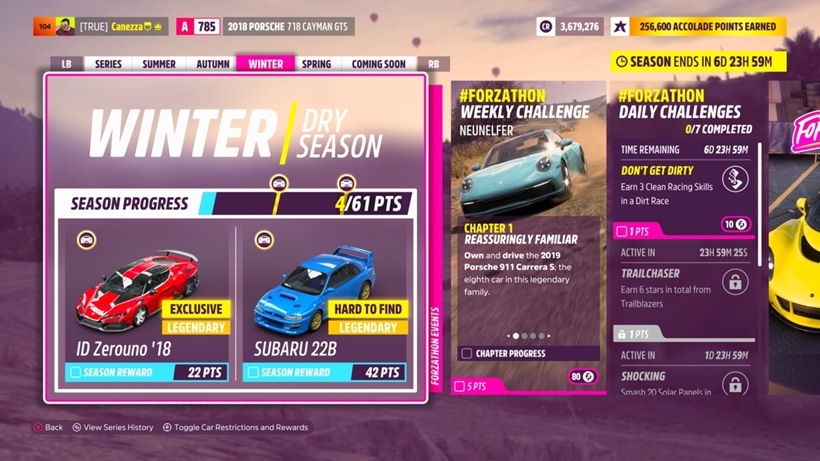 This week’s Festival Playlist season is Winter, and there are two cars up for grab. For collecting 22 points, you’ll unlock the exclusive Legendary ID Zerouno '18, and for 42 points, the hard-to-find Legendary Subaru 22B.

The Trial: A Fine Addition is a pain as you’re going to need some decent teammates to win this one — you’ll also likely need a car that’s almost fully tuned to the max. For this one, we used the McLaren Senna 2018 and the following tune: 989 493 905.

This week’s Eventlab challenge, Pickerchu Presents, is a Dirt Race that restricts you to class A cars from the USA. We used the Hoonigan Ford Escort RS Cosworth WRC “Cossie V2” 1994, which has some decent acceleration to get you through those checkpoints.

Next, we have the Speed Zone: Pyramid of the Moon, which requires you to beat a target of 128 MPH using an S2 class Porsche. For this one, we used a Porsche Cayman GT4 and upgraded it to an S2 tune using the tune attached to this share code: 659 773 578 for 35,900 CR. Get a good run up from the Tulum Expedition side of the Speed Zone, and you should nail this one. Alternatively, you could use the 918 Spyder 2014 as that is an S2 Porsche and probably just squeeze past the target, but unless you’ve unlocked it already, it will cost you a whopping 850,000 CR.

To complete Trail Blazer: Canyon Run with 16 seconds remaining on the clock, we used the Jeep Trailcat 2016 with a stock tune.

On to Seasonal Championships! No Expense Spared is a series of three Road Racing events that restricts you to a small pool of extremely expensive S1 class cars. The cheapest here is the Mercedes AMG CLK GTR 1998 for 2 million CR, but the Pagani Zonda Cinque Roadster 2009 and Lamborghini Centenario LP 770-4 2016 are also great shouts for just a bit more of your precious CR.

For the Midnight Battle Seasonal Championship, you’ll need a class A Super Hot Hatch. There are only three cars that meet these criteria, and while you’ll probably get away with any of them, we recommend the Mercedes A45 AMG 2013.

The Real Deal Seasonal Championship is a Dirt Racing series championship that restricts you to class C cars worth 25,000 CR or less. We recommend using the Toyota Celica GT-Four ST205 1994 that should hold its own against the competition even without off-road tyres.

Got any recommended cars or tunes for completing this season’s challenges that differ from these?