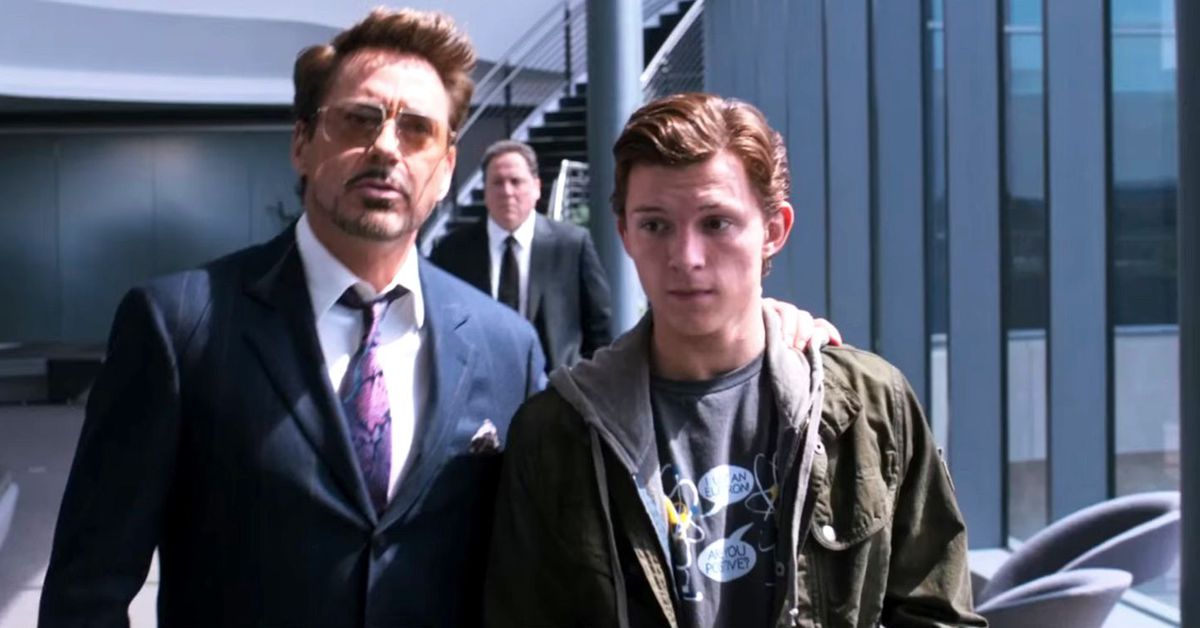 Sony and Marvel both benefit greatly from keeping Spider-Man in the MCU. Both studios know this.

Toward the end of Avengers: Endgame , Hawkeye is running with the Infinity Gauntlet, and asks Captain America what to do with it. To save the universe, they and their fellow Avengers need to get the Infinity Stones it holds to a safe place. But standing in their way is an army led by Thanos’s most fearsome generals, as well as Thanos himself.

Seeing as Hawkeye can’t get past all those foes on his own, the Avengers orchestrate a plan on the fly, passing the Gauntlet among themselves like relay racers headed to the finish line.

It just so happens that those who take a turn carrying the Gauntlet are all part of the next generation of Marvel’s flagship heroes. Black Panther takes it first, then hands it off to Spider-Man, a.k.a. Peter Parker. Next, as Thanos’s goons bear down on them, Captain Marvel comes in with the assist.

For fans, this scene is not just about defeating Thanos — it’s a literal handoff, as Marvel signals that Black Panther, Spider-Man, and Captain Marvel are ready to save the day and rule the Marvel Cinematic Universe, just as Iron Man, Captain America, and Thor did before them.

But this week, that symbolic passing of the torch hit a snag.

On August 20, news broke through anonymous sources that a deal between Sony and Marvel and gone sour. Because Sony owns the film rights to Spider-Man even though the character originated at Marvel Comics, the two studios’ recent partnership is the only reason that Spider-Man joined the MCU. But news reports suggested they’d hit an impasse while discussing the future of their Spider-Man agreement, with both sides ultimately walking away. The result: Spider-Man won’t appear in any Marvel films going forward.

The news throws both the future of Spider-Man and that of the MCU into disarray. Each side has its grievances and complaints, and fans are right to be concerned. But there is also a case for hope. Here’s why both sides may eventually find a way to let Peter Parker keep hanging out with his MCU pals.

An important thing to keep in mind: The entire story of the failed deal is probably part of a strategic play by Marvel or Sony, or even both studios, to gain an advantage in negotiations. Leaking this kind of news riles up fans who have taken a liking to the MCU iteration of Spider-Man and actor Tom Holland’s portrayal of him, and whose interest has led to positive audience reviews and huge box office hauls for 2017’s Spider-Man: Homecoming and this year’s Spider-Man: Far From Home .
Both of those solo Spidey films were set in the MCU and co-produced by Sony and Marvel, and outraged fan reaction to the idea that there won’t be any more of them puts pressure on both sides. Perhaps Marvel and its corporate parent, Disney, will have to accept less than the 50-50 co-financing stake they reportedly want. Perhaps Sony will have to budge a little and offer Marvel more than the estimated 5 percent of its gross revenue it is currently said to be sharing. All in the name of keeping Spider-Man in the MCU.

Sony has responded to news reports of its clash with Disney/Marvel not by actively addressing the issue of money and Marvel’s plea for a co-financing deal, but rather by focusing on Marvel Studios president Kevin Feige and placing the blame on Disney:

“Much of today’s news about Spider-Man has mischaracterized recent discussions about Kevin Feige’s involvement in the franchise. We are disappointed, but respect Disney’s decision not to have him continue as a lead producer of our next live-action Spider-Man film,” a Sony spokesperson said in an official statement obtained by the Hollywood Reporter.

“We hope this might change in the future,” the statement continued, “but understand that the many new responsibilities that Disney has given him — including all their newly added Marvel properties — do not allow time for him to work on IP they do not own. Kevin is terrific and we are grateful for his help and guidance and appreciate the path he has helped put us on, which we will continue.”

Sony’s attempt to change the subject to Feige’s busy schedule of upcoming Marvel projectscould indicate that it was a Disney source who leaked the news of stalled negotiations and framed Sony as selfish in the process. By publicly assigning blame to Disney, Sony is effectively signaling to Spider-Man fans that it wants Spider-Man to remain in the MCU but Disney won’t cooperate.

Meanwhile, anonymous sources speaking to the Hollywood Reporter have created a narrative that Sony believes it “doesn’t need ‘Kevin’s Playbook’ anymore” and that Disney has historically taken the higher road when it comes to financial opportunities concerning Spider-Man.

“Just getting Spider-Man in even one of their movies at the time, that was a stem cell infusion for Marvel,” one of the anonymous sources said.

Another source who was cited as a Sony insider added, “Tom [Rothman, Sony’s film head] is thinking ‘Okay, we’ve learned everything we need to from Kevin’s playbook. We did Venom on our own and we did Spider-Verse. ’”

Disney hasn’t officially commented. But realistically, it’s hard to believe that either Disney/Marvel or Sony would proceed with Spider-Man not staying part of the MCU.

Aside from Captain America and Pepper Potts, there is no character with a greater attachment to Tony Stark than Spider-Man, and by virtue of that relationship, Marvel has appointed Spider-Man to carry on Tony’s legacy. Marvel would have to rethink and completely reshape its future movies if Spider-Man can’t be in them.

And Sony can’t deny that it has benefited greatly from the Avengers raising Spider-Man’s profile.

Spider-Man: Far From Home is now Sony’s biggest movie to date (having earned $1.1 billion worldwide). It was considered to be the final chapter in Marvel’s Phase 3 set of movies. And star Tom Holland has publicly lauded and gushed over the chance to work with Marvel and be part of the MCU (Holland also appears to be among those who are unhappy with Sony in particular, as he reportedly unfollowed the studio on Instagram after news of its Spidey spat broke).

Losing its Avengers connection — Far From Home included elements and storylines introduced in Endgame — certainly won’t help the Spider-Man franchise. And whispers of a sad or frustrated Holland won’t be something Sony wants to deal with whenever a new Spider-Man movie comes out.

So it’s not in either studio’s best interest to let this deal fall through.

Sony’s statement about Kevin Feige’s workload gets at a question that’s been on fans’ minds since 2017. And the question could come up at Marvel’s forthcoming presentation during this weekend’s D23 Expo: When is Marvel going to start using the X-Men and Fantastic Four in its movies?

For superhero fans, the big exclamation point on Disney’s recent acquisition of Fox’s entertainment assets (which was set into motion in 2017 and finalized in 2019) was that Marvel would finally have the film rights to the X-Men and Fantastic Four back in its catalog. (Marvel sold the film rights to those characters, along with the film rights to Spider-Man, after filing for bankruptcy in 1996.) And at San Diego Comic-Con in July, Feige confirmed that the mutants would be incorporated into the MCU.

Now eyes are on D23, and whether or not Feige will announce dates for any X-Men movies. Here’s Marvel’s confirmed movie schedule so far, which covers the studio’s plans until 2021:

At some point, there will also be dates for the studio’s Black Panther and Captain Marvel sequels, as well as the third installments of Guardians of the Galaxy and Ant-Man . Add to that Blade (which was a surprise announcement at Comic-Con), and at least one Avengers -esque team-up movie peppered in somewhere.

As of this writing, if Marvel continues its recent pace of putting out two to three movies per year, its schedule is spoken for until around 2024, even if we don’t yet know its planned release dates. And, going back 2014, when Marvel announced its five-year film slate up until 2019, it’s conceivable that Marvel will reveal its 2022, 2023, and possibly 2024, schedule at D23. A surprise announcement that the X-Men or Fantastic Four are on the docket for 2024 or 2025 (an even bigger surprise would be seeing them earlier) could cap off the presentation.

As Sony justifiably points out, that’s a lot of projects for Feige to potentially be working on.

But there’s also historical evidence (perhaps to Sony’s chagrin) that Marvel values Spider-Man more than almost any other property it has. Not long after Marvel announced its five-year schedule of movies in 2014, Marvel and Sony announced their Spider-Man partnership in February 2015. Marvel then delayed the releases of Black Panther and Captain Marvel to open up space for Spider-Man: Homecoming , because of the name recognition of the character and Spidey’s importance to the story it would eventually tell.

Going by the two-year window between the first two Spider-Man movies, the next one should be due in 2021, possibly around the Fourth of July, like Far From Home — a spot that no Marvel Studios movie is slated to occupy (the studio tends to release its films earlier or later in the year, and all its current dates fall in February, May, or November).

But even if July 2021 won’t work for some reason, it wouldn’t be far-fetched for Marvel to reschedule Shang-Chi , the way it did with Black Panther or Captain Marvel , should a new deal with Sony come to fruition. And despite the anonymous reports and tales of impending demise, it’s a deal that Sony, Marvel, and of course Spider-Man fans, want to see.

It’ll give them the excuse to reboot the franchise a 4th time.

Does Sony own the movie rights to all the Spider-Man characters? How is that defined? Like villains and allies? They apparently have Venom and Carnage, along with the other main Spider Villains. I’m assuming they have rights to the SpiderMan Spin offs as well, like Miles Morales.

I’m assuming it’s a predefined amount of characters as some blend between books. They won’t be able to just pick and choose from MCU.

DIsney/Marvel still holds the rights for merchandise for everything Spiderman, but Sony holds the film rights for the Spiderman Universe. I guess Disney wants a 50/50 split but Sony is hesitant to give them that much… from what I have read anyhow.

Disney and Sony are rumored to be in the midst of a new deal which would not only bring Spider-Man back into the MCU but Venom, too.

Seems like legit enough information to just be made up.
Basically Sony adds some more and Marvel takes less of a cut

I can believe this. Fiege has said that Venom was not going to part of the MCU. Sony might be trying to force it in. Saying if you want Spiderman then you have to take Venom with him.

With the events in FFH, they could add in Venom easily.

Plus all the opportunities on disney+