Call of Duty: Warzone Verdansk ’84 map has arrived! After a year of the same Verdansk locale, Raven Software has debuted a brand new, overhauled version of the iconic battle royale map.

Every building, locale, and more have also been retouched and updated, with improved lighting for a better player experience across the entire map.

The map now takes place during springtime in 1984, a big change from the original Verdansk map that was set in winter. Springtime has brought new lighting aesthetics, new greenery across the map, and more full, finished areas.

Worlds finally collide in Season 3, as Black Ops Cold War’s story and theme is front and center in Verdansk ’84. The map features fan favorite Black Ops locales, including Summit and Standoff. Updates to favorite drop locations are also included in the experience.

It’s spring of 1984, and Verdansk has never looked so vibrant. But underneath the surface, the chill of the Cold War looms, as Perseus’ masterplan is revealed. Get your squad together and explore Verdansk as it was in the spring of 1984 — hold down seven new points of interest and discover secrets in a lush new landscape. Welcome to Verdansk ‘84.

Take a look at the breakdown of Verdansk ’84 as you drop into the new experience in Call of Duty: Warzone.

Here’s a look at the new locales & updated places in Call of Duty: Warzone’s Verdansk 84.

Gora Summit, as you could’ve guessed from the name, is the iconic Summit map from the Black Ops universe brought to life in Warzone. The location no longer has a massive barrier between it’s high ground and the low ground below.

At the Gora Summit, there’s a working cable car system that allows you to go from the top of the Summit to the end of it. The cars also let you move between certain buildings of the Summit allowing for quicker transportation around the area.

Players will also be able to use vehicles to get from the lower areas up to Gora Summit quickly, which is a welcome change after being blocked off by the Dam wall in the original map.

A new location Raven added to Verdansk ’84 is the Airplane Factory (or ‘Factory’ on the mini map). This POI is located in almost the center of the map.

For players who love the hot drop of Superstore, Factory is located directly next to the Superstore with quick in and out access. The Factory features an airplane in the center.

Raven believes this location will help fill out areas of the map that felt under utilized in the original Verdansk. Airplane Factory becomes a great place for transitioning between Superstore to other parts of the map as you progress on, even with close access to the main Airport.

The location is almost always in the circle, has a good variety of loot, and will consistently have some action going on to get better loot and upgrade.

This brand-new area features four large warehouses – one big enough to store most of a plane fuselage inside, including cockpit, fuselage, and engine sections – and an underground passage to a secondary warehouse with more plane parts to spot. Attached to the biggest warehouse is a pair of chimneys (which you can ascend to gantry platforms). Outside is a large hangar, numerous outbuildings, a parked plane, and a fuel tower and pipeworks, all of which are climbable.

Grid Array is a new area that replaces the previous Array location in the Warzone Verdansk map.

This new Grid Array has a massive grid based tower that players can access certain points of to get high vantage points across Verdansk 84 map.

Players can climb up the ladders to get to the top of the Grid Array, allowing for high sniper vantage points with a major risk. Players will be easy to be spotted at the top, especially with sniper glint. The surroundings of Array are updated with new buildings to access.

The stadium in Verdansk has gone through more iterations than really any other original part of the Verdansk map.

It started off enclosed, with no inside access. Players were only available to get to the top of the Stadium via helicopters. Raven then updated the stadium with Season 5 of Warzone x Modern Warfare to blow it wide open, allowing players to enter from multiple angles and use grapple hooks to get to the top of it.

Now, with Verdansk 84, Stadium sees another change. The stadium features a classic, 1980s feel. Raven describes it as the “old school” feel of stadiums from that area.

Raven also made note of that fact that there’s no longer a roof top of this stadium, meaning players can’t camp at the top waiting for end circles to move.

The new Stadium also no longer features an underground portion.

The Airport of Verdansk is getting a makeover in Verdansk 84.

In the previous map, the Airport was destroyed with no proper access or areas on the second level. Now, the airport is fully reconstructed with full access to all of the floors.

The second floor in particular is more useful now thanks to new cover areas, better loot, and advantages over the Airport Tower. The Airport Tower does not have a clear line of sight into the Airport itself anymore, allowing for more tactical plays to occur.

The outer areas of the Airport are also changed to no longer have smoke or fire raging from them. The locales are put back together and clearer entry and exit points are now marked.

The Farmhouse in Warzone’s Verdansk has been updated to become the classic Black Ops 2 map Standoff in Verdansk ‘84.

Standoff replaces the Farmhouse area, but Raven assures that some of the outer Farm buildings are still available for players to traverse as they move between locations on this side of the map.

Fans who love Black Ops 2’s Standoff will be in for a treat at this location. Farmhouse has a clean, classic Standoff feel that is easy to traverse and offers more versatile gameplay than before.

Verdansk 84 brings some new and fun changes to the Superstore. Superstore remains one of the most popular landing spots on the map, and has high action with some of the best loot you can get.

With the new map, Raven has updated it to be a more finished up location. The original version had a lot of destruction, broken boxes, and areas on fire. Now, it’s all cleaned up and an actual store.

Players will have to use different routes to get across the store as more areas are now filled in in the center areas of the store itself.

While the majority of Downtown will remain the same, Raven has made some changes to it in Verdansk ‘84 to allow for a better player experience overall.

Downtown in Verdansk 84 has less density of buildings to not feel as packed up as it currently does. Raven does want to ensure the area feels like a downtown, but also wanted to lighten it up a bit to change some buildings to be under construction.

Raven notes that these changes allow for less players to camp in certain areas of downtown, and rather, have to engage in fights as they move across the updated POI.

One of the biggest changes Downtown is the towering Broadcast building.

The interior is now more accessible, with an interior stairwell running to the top of three unfinished floors where views and long-range takedowns are spectacular.

Karst Salt Mines updates and expands upon the Quarry area of Verdansk in new ways.

There were many buildings around the River Quarry that were not previously accessible, and also caused many players to just ignore the location overall.

The Old Mine is another way Raven is filling up the Warzone map with better areas to search for versus having open forest.

This Old Mine is located in the north west section of the map, close to Gora Summit (which used to be a Dam). Previously, there was nothing in this area. Now, the area has been updated with new buildings and accessible alley points to get loot as you traverse between Summit and the north west of Verdansk 84.

Over at the Barakett Promenade, one of the five-floor apartment complexes hasn’t quite been finished, turning this tenement block into a maze of half-constructed rooms and hallways.

This changes up this side of the map dramatically from rows of the apartment complexes to a more asymmetrical situation where there are both pros and cons to taking a position up on the finished or unfinished apartments. 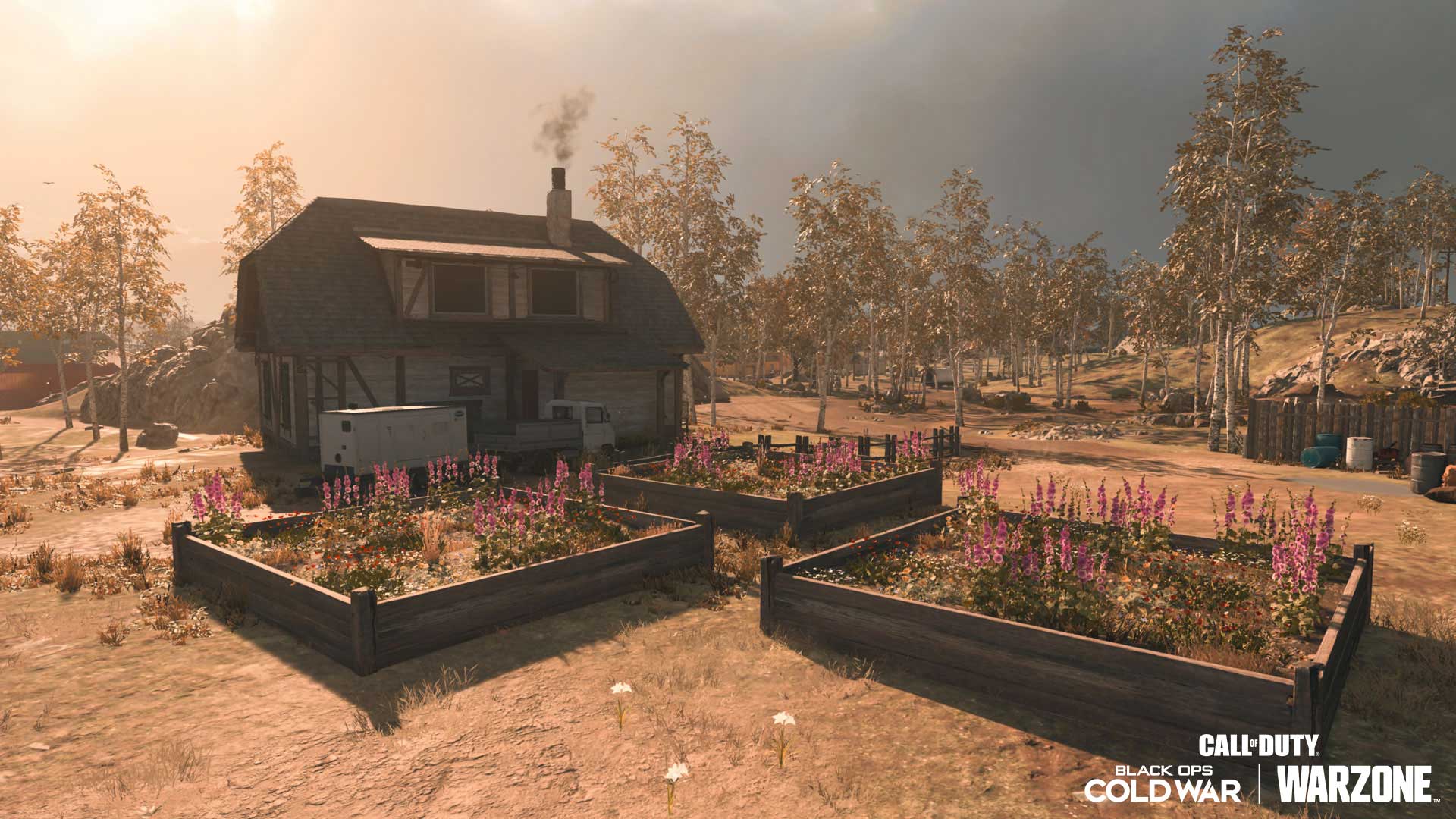 Verdansk has plenty of “retro-fitted” areas to show what life was like back in 1984, and a prime example of this is the Novi Grazna Hills.

In modern day, parts of the Novi Grazna Hills were leveled to make way for a new housing development. But what was there before the bulldozers moved in?

Come to this side of the map, and you’ll find a lush, wooded plateau with a farm smallholding. Specifically, there is a tiny windmill, a barn, and a cottage, which offer new combat opportunities within the immediate area. 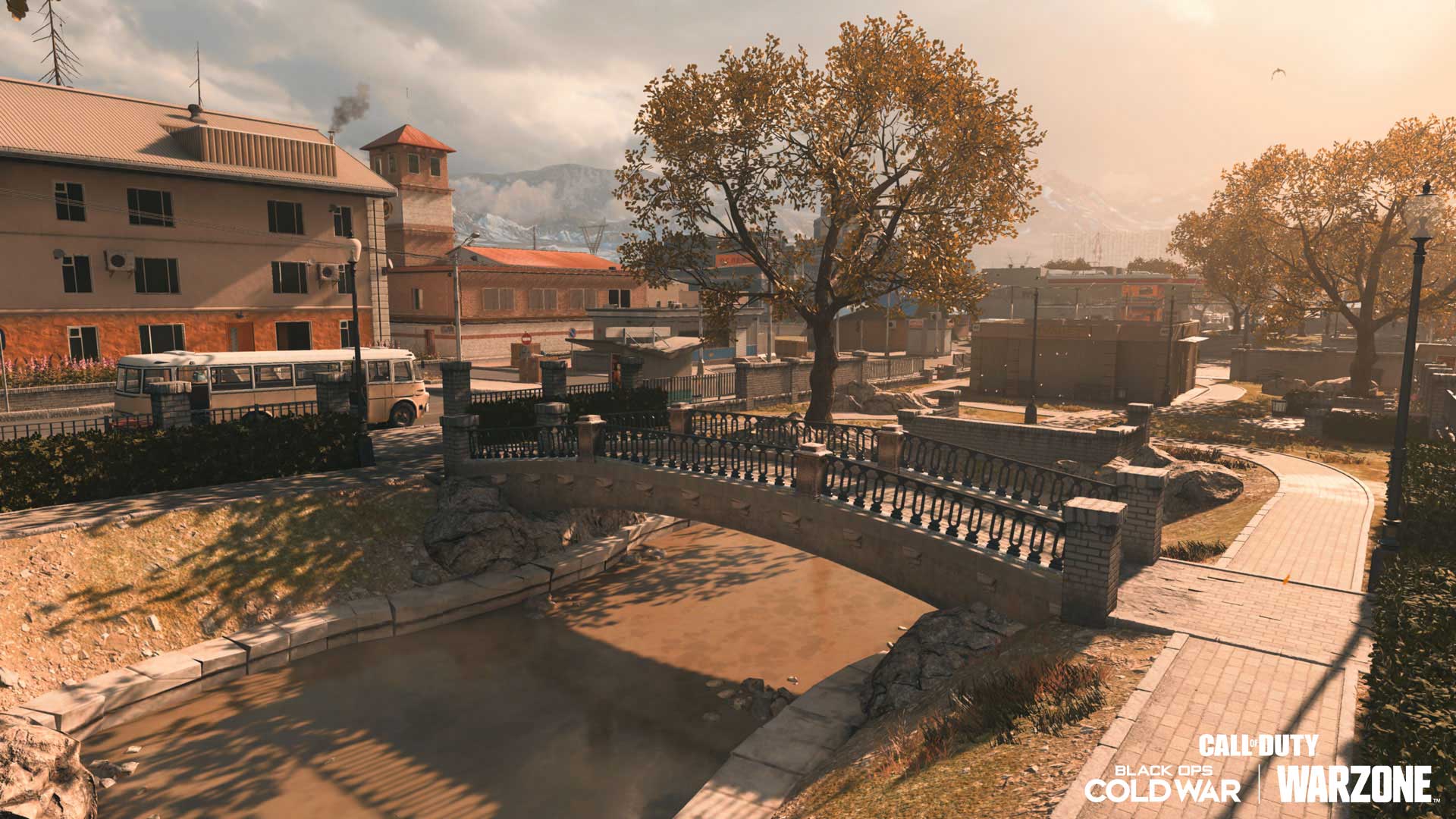 Sometimes, less is more – and the Barakett Promenade is a good example of some building removals to improve the flow of the game in terms of movement and combat.

The library North of the Ferris Wheel has yet to be constructed, and in its place for now is a charming recreation area.

Also, the Market adjacent to the School further west along the Promenade is now a parking lot, and the entirety of the West Promenade between the parallel roads is now a long section of park with trees, tables, fountains and bridges. Don’t stop to admire this scenery… you have a war to win! 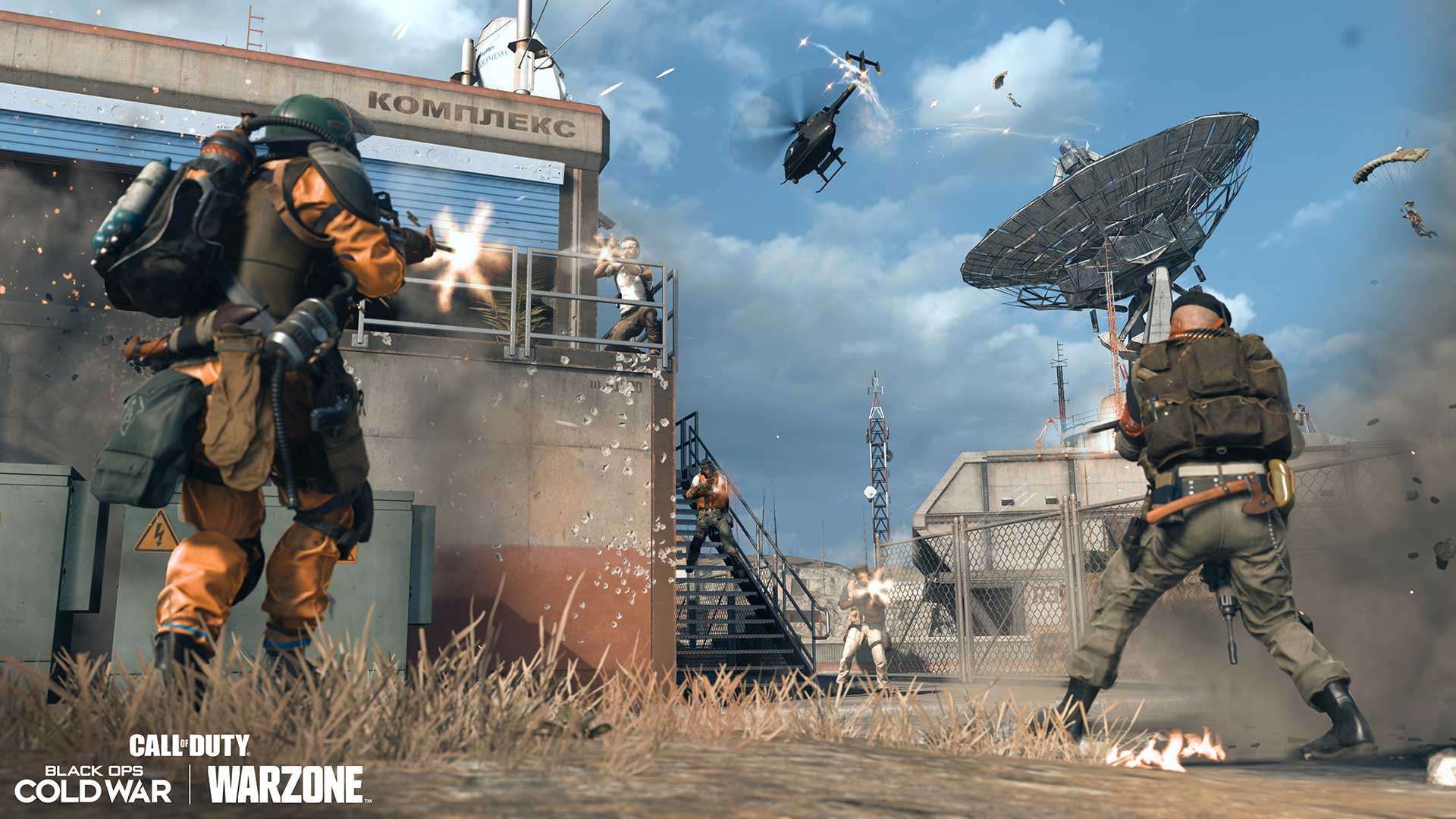 An open-door policy exists inside every Police Station across Verdansk as additional upstairs offices are accessible (with windows to shoot through), meaning more escape or entrance options are available, and sightlines across previously familiar areas (like Airport Maintenance, for example).

Similarly, each of the Fire Stations has a new exterior (adjacent to the tower) enabling lower roof access, and for those with the necessary dexterity, access to the main upstairs interior via a spot of parkour.

Also look for additional subtle changes throughout the map, such as newly accessible windows on stairwells throughout the Downtown buildings and certain tenement blocks, like the freshly-cladded one at Lozoff Pass.

That’s a look at the new locations & updated locations in Verdansk 84 in Call of Duty: Warzone.