Call of Duty’s Twitter account to have hinted that another movie icon will be joining Warzone, with Rambo being teased.

Warzone has now undergone its full 1980s overhaul, with Verdansk ’84 becoming the new Warzone map. Cold War-era weapons litter the ground, and several Operators have the retro 80s aesthetic. However, the overhaul could be going further, with a 1980s movie icon teased to be joining the game.

When you think of a classic 80s action blockbuster, Rambo is likely one of the first movies to come to mind. The action series follows Vietnam vet John Rambo as he takes down hundreds of foes, and now it’s likely he’ll be deploying to Verdansk in the coming weeks.

Call of Duty’s official Twitter account shared a Warzone Report of a mysterious player, SURVIVORJOHN#1009062, on May 5. The first hint is quite clear, with ‘John’ being Rambo’s first name. However, a deeper dive into the stats have made this connection all the more likely. 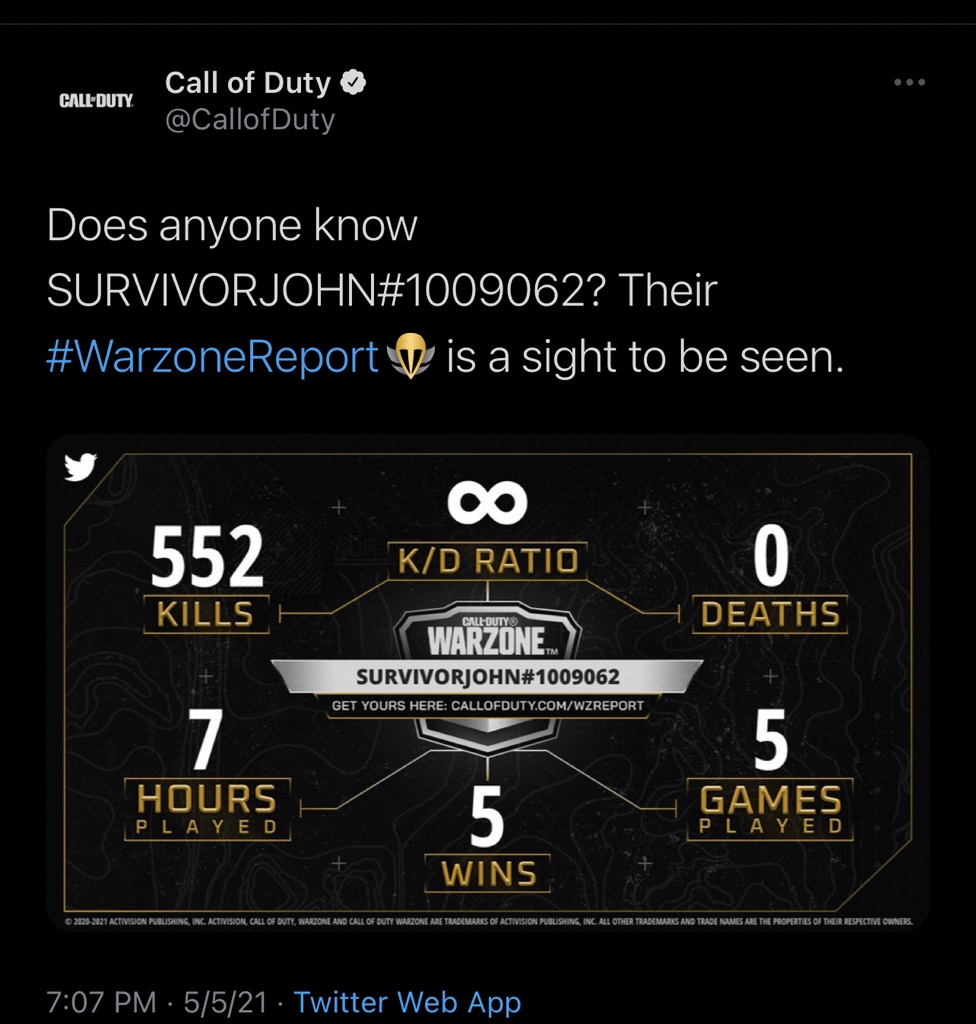 Call of Duty teased this further by replying to a tweet from April 28 asking, “now that Warzone is set in the 80s, how about adding in some 80’s action heroes in the game like Rambo, Terminator, Chuck Norris, and The A-Team.” CoD quote-tweeted the question with a thinking face emoji.

Hey @CallofDuty, now that #warzone is set in the 80s, how about adding in some 80's action heroes in the game like #Rambo, #Terminator #ChuckNorris and #TheATeam

These teasers make it extremely likely that John Rambo will be arriving in Warzone as either an Operator or as an Operator skin. There could also be accompanying 80s-themed weapon Blueprints, such as his iconic M60 and Survival Knife.

When will Rambo be in Warzone?

Warzone last received movie icons during the Haunting of Verdansk event, with Saw’s Jigsaw and The Texas Chainsaw Massacre’s Leatherface joining the game for the event. The official roadmap shows that Warzone Season 3 Reloaded, the midseason update, will feature a Midseason Event.

Activision hasn’t revealed any details of this event, other than there will be “new Limited Time Modes, rewards, and more.” There’s no guarantee this event will be similar to the Haunting of Verdansk, but it’s possible for the Rambo skin to arrive with this Midseason Event.

Can I get a bow with explosive tipped arrows and a giant survival knife?