The Gas Mask animation has long been the bane of Warzone players, but players should find it much less troublesome in Season 3 and beyond.

Following the Season 3 update, the Gas Mask animation “will no longer interrupt a falling player,” so your mask will no longer get in the way of you pulling your ‘chute. Also, it will no longer “play animation when the Player is ADS and affected by the gas from Nebula V Rounds.” However, players can use certain attachments to increase these lightweight snipers’ one-shot headshot range. Here’s a quick rundown of the Sniper Rifle nerfs, but you can check out the full details in the patch notes below.

The following Weapons will one-shot to the head only while inside of their Max Damage Range:

The following Weapons do not have one-shot potential to the head: The fan-favorite mode, Iron Trials, is back. This time on Caldera. Here’s a recap of the Iron Trials experience:

Players had a hard limit in Plunder of carrying a maximum of $1.6 million. Whilst this is an extremely unlikely scenario, we wanted to make the system more robust for the minority of Players that achieve such a feat.

A roughly symmetrical arena is based in the belly of a ship moored just off the coast of Caldera, with identical hallways on the perimeter of an otherwise open space.

Located between the Mine and the Ruins, Dig Site provides Operators the opportunity to rummage through abandoned excavation equipment, tents, and massive skeletons for Supply Boxes and other items. 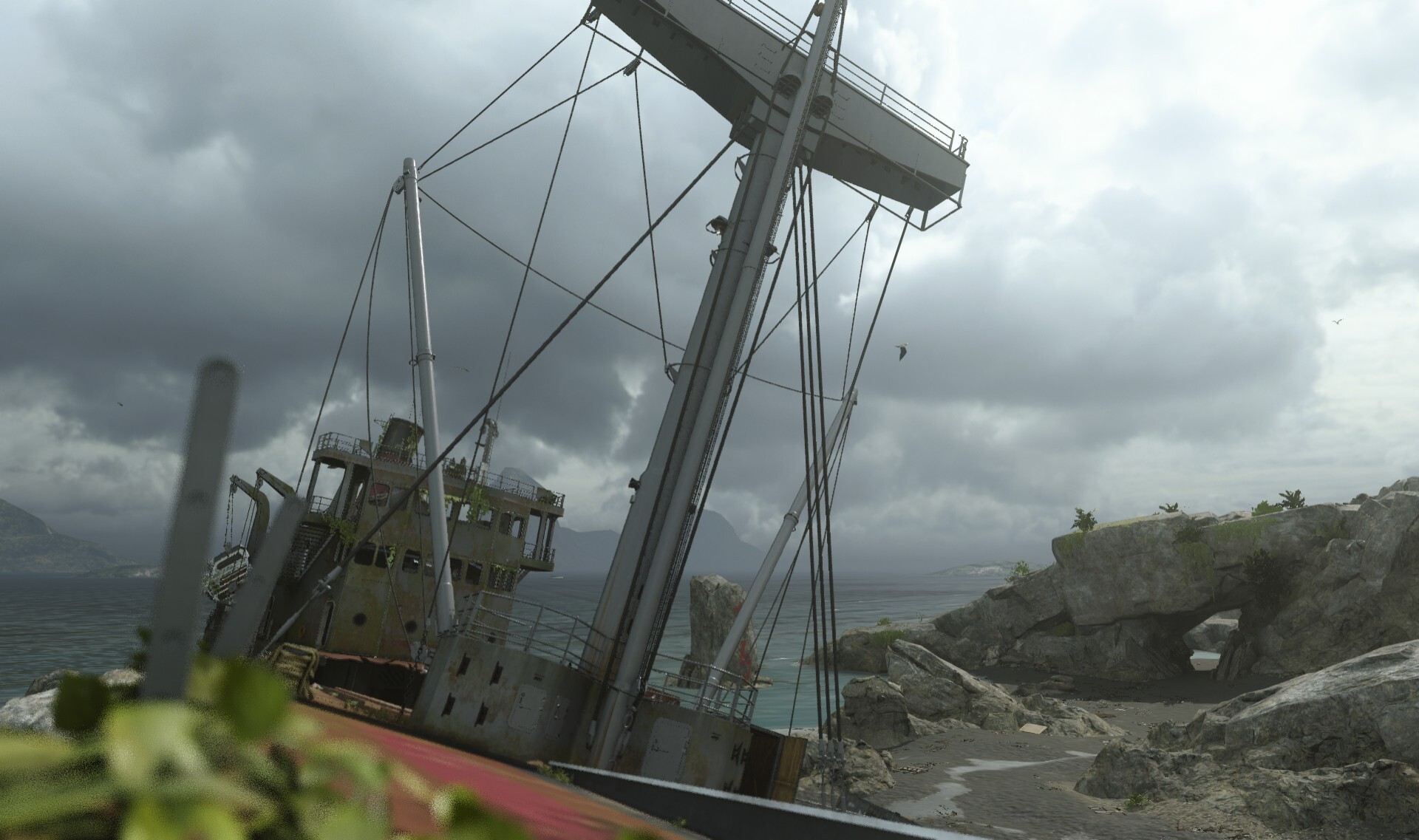 With Season One, we introduced Public Events, like Cash Drops, during Infil to draw Players towards new loot locations. We have been happy with the results of these ‘honeypot’ opportunities but we want to take it a step further. Starting with Operation Monarch, we will be introducing “High Value Loot Zones” to provide new, fruitful opportunities for Players willing to take the risk.

The Gas Mask remains a continued focus for our Quality of Life efforts. It plays an important role both in gameplay and the visceral Call of Duty feeling, but we felt that we had seen one too many videos of Players jumping from high heights into the Gas and the game incorrectly prioritizing the Gas Mask animation over the parachute… and we all know how that scenario ends.

We reviewed the data for the Most Wanted Contract and we felt that improvements needed to be made to increase its engagement and success rate, whilst still retaining the all important risk/reward that it offers.

Loot that spawns across Caldera have been adjusted…

We want to further increase the value and rewards of looting during the mid-game. It’s important for both pacing and movement in Battle Royale that there are always new rewards to be found for Players who rotate through locations for greater loot advantages, and our first step on this path is to bring single Perks into loot. From our internal testing, this change has brought a wealth of new Player stories and we will continue to roll out additional Perks in this manner as we review player feedback and data on how it improves the pacing and experience of Battle Royale. These lootable perks will launch first in Caldera, and then to Rebirth Island at a later date.

Whilst Spawn Protection plays an important role in any multi-life game mode, we felt it needed some extra refinement to make sure it cannot be exploited by Players. We will continue to monitor Player behavior in this area and make further changes throughout the season if required.

The confirmation box when making a Buy Station purchase had good intentions, but we felt that the muscle memory had become so ingrained in Players to double-tap twice in succession. This was causing unnecessary friction in a potentially hostile combat situation, versus the unlikelihood of mistakes being made. We plan to make additional refinements to the Buy Station experience during the Season.

For a list of other known #Warzone issues, please check out our dedicated Trello Board.

The Assault Rifle Bravo (VG) has considerable close to mid-range potential–however, as a fast-firing burst Weapon, it would often burn through its magazine capacity rather quickly, leaving the wielder outgunned in longer distance or larger-scale engagements. With this change we are aiming to minimize one of the Weapon’s more obvious disadvantages and inch it ever closer to viability.

Handgun Charlie (BOCW) has been a truly dominant Secondary Weapon. Due to its substantial headshot multiplier, Handgun Charlie (VG) was able to achieve Primary Weapon TTKs with little downside. We will be closely monitoring the Weapon’s performance and make further adjustments if necessary.

Light Machine Gun Charlie (VG) has overstayed its welcome as the go-to long range choice. Its high damage profile paired with the ability to load it out to remove most recoil made for a nasty combination. By addressing some of the major outliers of the weapon, we’re left with a strong choice for those that can control it effectively.

The adoption of 150 health in Battle Royale resulted in a huge boon to the Sniper category – While all other weapons require an additional shot or two, Snipers remained as they did previously. The long-standing “one shot rule” unfortunately diluted the Sniper class into one important metric, speed to click heads.

As mentioned above Snipers may now use damage ranges as a defining characteristic of their one-shot potential. This not only brings more identity to each weapon but means Attachments that provide the lighter and quicker sniper rifles the Damage Range stat will increase their ability to one shot at increased distances.

Our ultimate goal is to enable a wider range of viable playstyles and really push the potential of each weapon. Keep an eye out as we expect further adjustments to Sniper Rifles as we hone in on the best all-round experience.

The following Weapons will one-shot to the head only while inside of their Max Damage Range:

The following Weapons do not have one-shot potential to the head:

Please see below for the full list of changes to Snipers, and keep in mind that attachments that provide Range Bonuses can drastically change the Base Weapons Max Range:

The 8mm Kurz 48 Round Drums were holding too much of the Type 100’s overall damage potential. We’ll be monitoring the Type 100 this update and make adjustments to the base weapon if any are required. This Magazine is still very powerful with the increased rate of fire it provides and the damage bonus still results in one less bullet to kill.

The VDD 189mm short barrel has been a huge boon for the Submachine Gun Charlie (VG) and would often shred the target’s Upper Body far outside of its maximum damage range. The VDD still provides a large bonus against extremities and still increases both the min damage and optimal damage range of the MP40. We expect continued use of this attachment, even with these adjustments.

This slight change to the damage profile results in requiring one less shot to kill if all shots are to the limbs.

Continuing our deep-dive into Ammunition – we’ve looked at Subsonic and feel that a downside on this ammunition puts it out of the desirability range of where we’d like it to be.

Equip his Favorite Weapon, the new M1916, and level him up to unlock thousands of Player XP and Weapon XP for the M1916, two additional Operator Skins, two Quips, the “No Escape” Finishing Move, and more.

The Season Three update will have a download size of approximately 40 GB for those who own the free-to-play console version of Warzone and are currently on the latest updates.

Note: PC users will also need 13 GB of additional space on their hard drive for the patch copying process; this is only temporary space that is reclaimed upon completion of the patch installation and is not an additional download.

Remember, the Vanguard download is not necessary if you are only playing Warzone, and vice versa.

Furthermore, for a smaller overall file size, Players can choose to uninstall/remove other data packs if they are no longer needed.

How many people are required for a custom rebirth?

What’s the new sniper meta? I was never a fan of the HDR, wonder if I can use the AX-50?

How many people are required for a custom rebirth?

I don’t remember. I know at one point it was 20, but I think they changed that.

What’s the new sniper meta? I was never a fan of the HDR, wonder if I can use the AX-50?

Here’s every Sniper Rifle and single-fire Marksman Rifle in Warzone, ranked from best to worst: The AX-50 has always suffered from its lower bullet velocity and bullet drop, but if you prioritize ADS speed when building it, then it becomes a fantastic option for Rebirth Island.

While it can still deliver that all-important one-shot headshot at any range, its bullet velocity prevents it from being the best Sniper Rifle in Warzone Pacific Season 3. Hitting those far-off targets will be quite difficult with the AX-50 but its one-shot headshot keeps it in the top five, especially when you build it for quickscoping in Rebirth Island. You may be surprised to see the Pelington in the top five Warzone Sniper Rifles, but it has the longest one-shot headshot range of the lightweight snipers.

This lightweight Black Ops Cold War Sniper will feel extremely similar to the previously meta Modern Warfare Kar98k and Swiss K31. Although not as speedy as the Kar98k, it has a much higher bullet velocity and can one-shot headshot enemies up to around 70 meters, which is about 20 meters further than the Kar.

If you’re looking for a versatile Sniper Rifle to quickscope enemies in Rebirth Island, then the Pelington might just be the weapon for you. While Vanguard’s Sniper Rifles don’t receive as much love as the best Modern Warfare and Cold War snipers, the 3-Line Rifle is one of the best Sniper Rifles in Warzone Pacific Season 3.

The 3-Line suffers from a high amount of flinch and bounces around when you move, but its bullet velocity is its saving grace. Almost feeling like hitscan, you’ll hardly need to lead targets at all, so simply aim for the head and you’ll be able to take down enemies in one shot from any distance. The HDR was king back when Warzone first launched in March 2020 and it’s at the top of the pack again following the major changes made in Warzone Pacific Season 3.

As the HDR is a Modern Warfare Sniper Rifle, it’s one of the heavier weapons on this list. However, it still has a respectable ADS speed, strong rotational aim assist on controller, and of course, it’s capable of one-shot headshotting players from any distance. You won’t be quickscoping players up-close, but its high bullet velocity and high-zoom optics mean you’ll be unstoppable at range. If you’re looking for a new Sniper Rifle to use across Caldera and Rebirth Island in Warzone Season 3, look no further than the ZRG 20mm.

Comparing the ZRG and HDR, the ZRG has a faster ADS speed and higher bullet velocity — two extremely important factors when weighing up the best Sniper Rifle. Plus, it still one-shots to the head.

Some may prefer the feel of the HDR, but if you can get used to the ZRG, you’ll find it’s the best Sniper Rifle in Warzone right now.