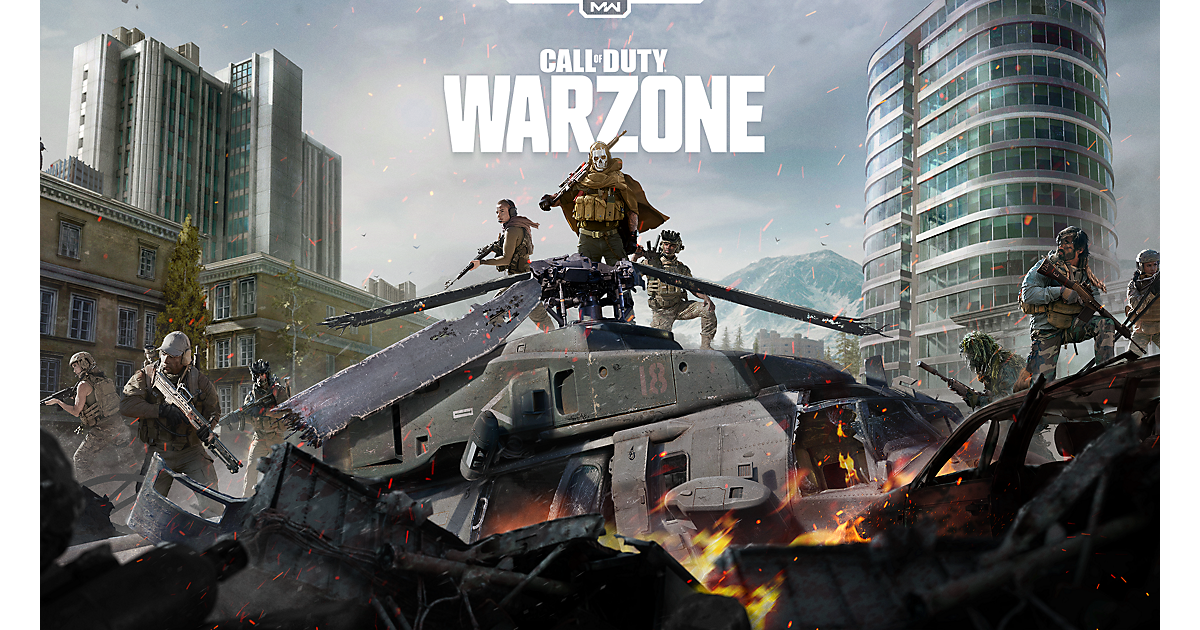 What’s everyone’s go to Warzone Loadout? What are you running and why? Let’s hear it!

My current loadout is

I run Cold Blooded so I’m not seen by IR scopes, Overkill for 2 weapons and Tracker

I am debating on mixing this up. I don’t mind the MP7s and M13s that are dropped in game. I love the M4’s (purple or gold). So, I’m thinking of dropping the Overkill and just running a standard setup.

Sniper - Either HDR or AX-50. I’m debating on dropping the Infrared scope as I’m not happy with it. Seeing people stick out is nice but I could be more accurate. The issue is, the stock HDR scope blows which is why I may switch to the AX-50 as I like the default scope. If I do, I’ll add attachments to increase the AX-50’s range as it’s not as long as the HDR’s.

Secondary - doesn’t matter as I’m going to stick with looted items. (for now). Maybe a launcher, whatever. TBD.

I’m thinking of creating a second class for loadouts. The reason is they are so easy to get in game. Collect 6000 is easy. They also drop for free all the time. Sooooooooo.

Create the 2nd class to have the AR, SMG or LMG of your choosing. I’d probably go with MP7 or Kilo but I’m also leaning towards a GRAU setup. Going to have to test this out.

Described here but he goes in the reverse.

I can’t go into detail about all the attachments as I’m not quite the COD nerd as Lala, but…

Load out one for Solo’s :
PKM with hybid scope and other attachments.
Crossbow with exploding tips

Load out two for Plunder :
PKM with hybid scope and other attachments.
Joker (for dropping on the cash out drops and the fuckers in the choppers)

Perks are Kill chain, Pointman and tune up

Depending on who I am playing with Loadouts three and four :
PKM with hybid scope and other attachments.
HDR with thermal and other stability attachments

Perks are Kill chain, Overkill and tune up

PKM with hybrid and other attachments
RPG ( for those OP vehicles)

Perks are still kill chain, pointman and tune up

I use kill chain to better the chances of getting kill streak in caches, which works well.
I like to use point man because it gives the team more cash for doing contracts
I use tune up because the revive time is 25% faster

I followed this video for builds. I never had the opportunity to get the 2nd loadout. So I can’t comment on it.

One thing to note @SALT was running a similar build at one point we weren’t finding enough SMG ammo for both of us. The ADS speed on the Aug isn’t where I like SMGs, gun did well though.

Yeah, I was thinking of switching over to the AR since we had ammo issues. 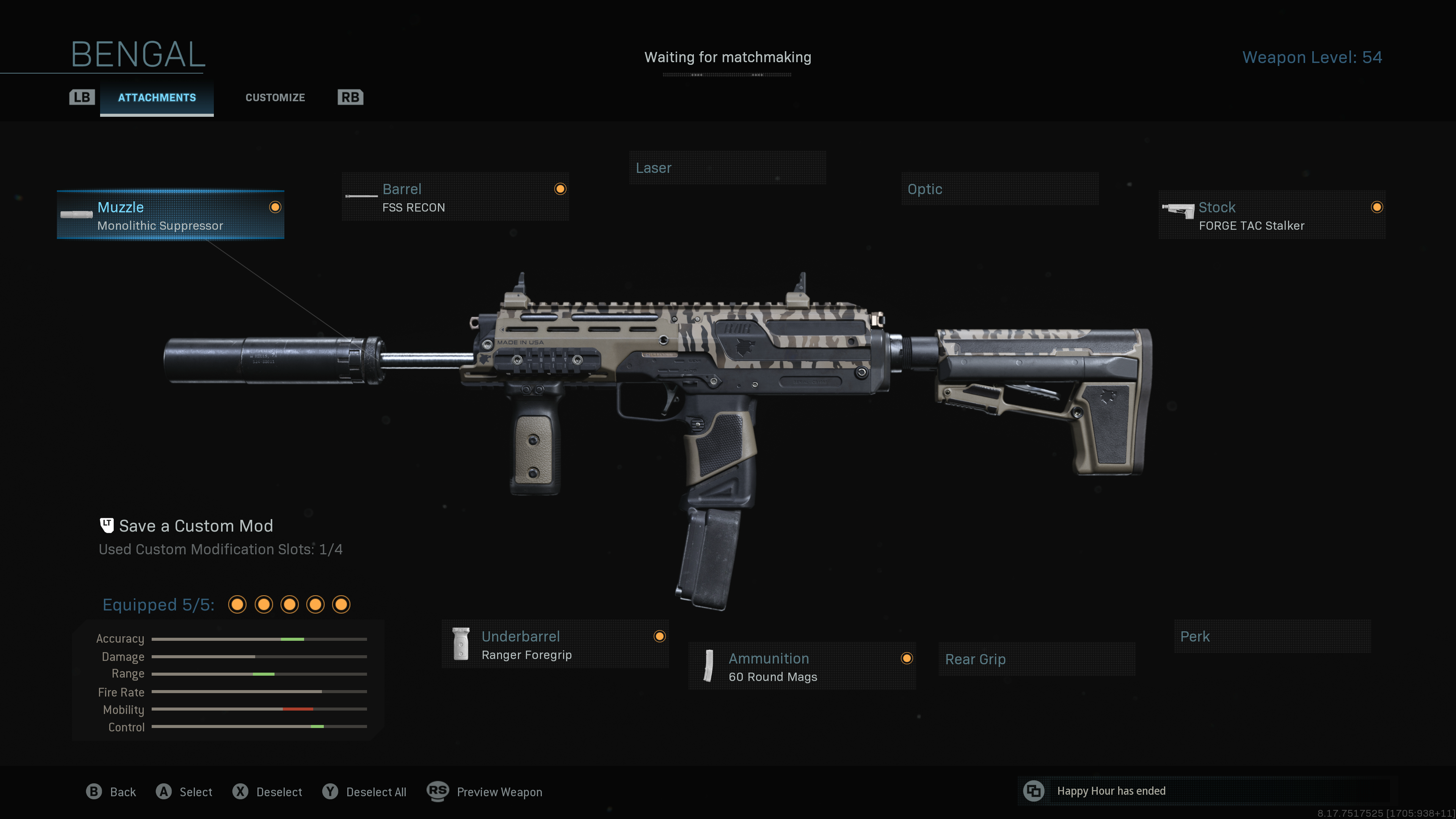 So I am trying to figure this whole Overkill-Ghost 2 load out thing.

I am confused as to how you can have 2 primary guns on your Ghost (2nd) load out.

I have been trying to find a good video that explains this, but all of them rush through it and don’t really give a good view and detail.

I am confused as to how you can have 2 primary guns on your Ghost (2nd) load out.

You can always carry 2 main guns in Warzone. That’s not a perk. That’s normal game mechanics. It’s just like when you are looting and pick up a M13 and an MP7. You don’t have overkill on then, right?

But if you want 2 customized guns from 1 loadout packet you will need Overkill to do so.

The idea is to get the Overkill loadout first so you have 2 customized guns, then get a 2nd loadout (drop or purchase) and pick a class with Ghost. Then pick up one of the guns you drop at the loadout package.

This was much easier to do when loadouts cost only 6000 (I also think they randomly dropped more often). Lately I’ve only been able to get 1 loadout per game so I can’t really do this.

Right now I think the killer perk is Ghost. I consider that the most important part of getting a loadout. Everyone runs with a Heartbeat sensor now and why not? They’re OP, you can use them the entire game as they never run out. Between that and the UAVs, Ghost is just so important.

So, now I’ll take my sniper build (with ghost) and keep a looted gun provided I get a decent one. Or, I’m just going straight to my MP7 or AR with a RPG.

My RAM build for Warzone. This thing is a laser, it’s so stupidly accurate. I know a lot of people like Unberbarrel attachments but it’s just not needed with this gun. You really need the Monolithic Suppressor and FSS Ranger barrel for distance. Those are a must. Stippled Grip to ADS faster. Of course the 50 round mag to drop enemies. Whatever your preference is for optic. I like the 3.25 scope so I can see across some distance especially since I don’t run Overkill with this class. Hence, no Sniper.

All you fuckers should run GHOST!!! UAVs and Heartbeat sensors are so fucking OP. Render them useless and help your team. 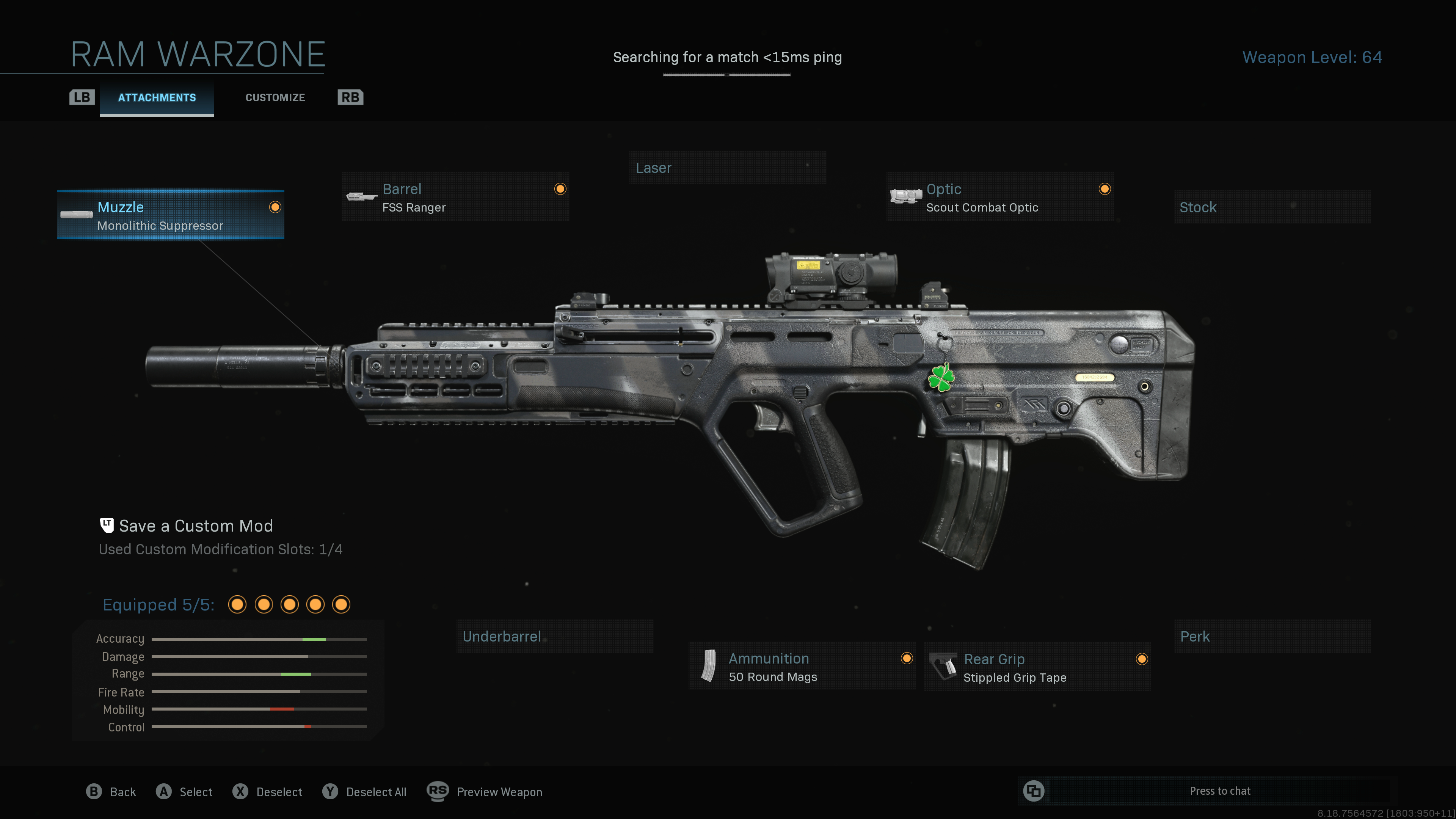 Ok, I’ve been fucking around with different guns in MP, getting them leveled up or gold. I’m currently working on getting the SA87 gold and thought it may be a good Warzone gun. I know most people hate this gun for MP but I don’t mind it. I run it iron sights, a lot of things to help ADS and it’s not bad.

Anyway, I was running this earlier in MP and thought it might be ok in Warzone. I tested it out tonight (accidental buy) and was really surprised at how well it worked. I downed an enemy in 4-5 shots. I’m not sure what to think yet, and I doubt it replaces my MP7 or RAM 7 but it is an option.

I currently run it with Monolithic suppressor, ranger foregrip, stippled grip, 60 round mag, and ADS stock (forget the name). I wish there was a firing range to test guns as I’d like to mess around with attachments.

I tried to look up info but there isn’t too much out there. Here’s a video talking about the gun. Just an FYI, I am the meta, I don’t follow it. I like to fuck around and use offbeat weapons. Give it a try. It didn’t seem bad at all.

Still trying out this gun. So far I feel it just melts people. I have mine configured a bit differently than the video. Need to get a few more games in with using this setup.

This thing is a beast.

Have a late game loadout set up. For when you come back from the Gulag or bought back in and you can hit a loadout in game.

What is a Late Game Loadout?

SMG of your choice. MP7, Aug (with 5.56 if you like). The secondary is what makes it late game. Equip a pistol with the Fully Loaded perk. SMGs and Pistols use the same ammo so you’ll be fully stocked when you grab this. Bonus points for being able to equip Ghost (which all you fuckers should run all the fucking time. like EVERY FUCKING TIME). 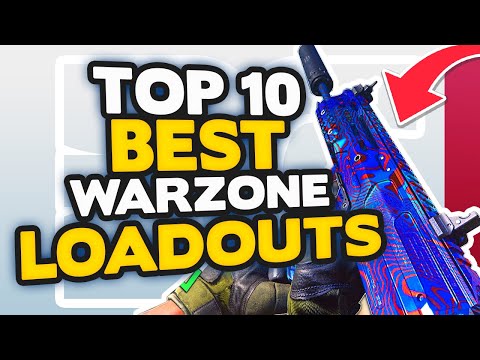 Yeah, I know the GRAU is the new hotness. I think the biggest thing to consider is it doesn’t have the aim assist that the other rifles do but it’s supper accurate. Meaning if you can aim for your first shot and hold it that it will beat out all other guns.

I also see he uses Overkill on all his classes. I guess Ghost / Cold blooded isn’t a thing? I guess if you are like him and going for “30” kill games then it doesn’t matter if people know you are around. Also, is this for Solo play or Team play?

I’ve been toying with the idea of dumping ghost because I know most people in GRG don’t. So me being invisible is pointless.