Queue the GRG humor up. I’m having trouble with Uranus.

So I basically rage quit Warframe tonight. I’m trying to work through Uranus. Get the Junction and farm some stuff and I’m just getting worked by the enemies. I don’t seem to be able to damage them at all. They seem to take 4+ headshots with the bow. I tried the Boltor and I’m just unloading full mags into 1 guy.

What gives? What am I missing. Do I need better mods? (figured I’d pull this topic out of the “mega thread” as we should really separate some of the conversations there.

You are getting on up in the enemy levels now. You need to forma and rank up your warframes and weapons to make them stronger so they can take out the enemies easier. I have 4 go to frames and all of them are 3 forma or higher. My weapons are the same. That is how you out on stronger mods to deal more damage

Just do like I do. I just run around and kill shit. I started it yesterday. No clue what to do with all the gear but I had fun doing the missions and killing stuff.

Yes but eventually you get to areas where you have to unlock planets by having certain stuff.

You have no idea. There’s a ton to this game and really my only complaint is the complete lack of explaining it to people. Once you start figuring things out you realize the rabbit hole just goes deeper.

I sort of understand what @quantumklutz is saying. Going to have to watch some YT videos. I’m trying to get the next 2 quest lines done so I can take advantage of the new DLC (Plains of Edelon). @GrumpyInUt says I need to complete “the War Within” quest.

Just do like I do. I just run around and kill shit. I started it yesterday. No clue what to do with all the gear but I had fun doing the missions and killing stuff.

That’s pretty much how you have to get started. Kill things. Collect resources. Complete areas on a planet.

Make sure to go to the arsenal and mod your Warframe & equipment. I’ve been a tard and just been auto modding my stuff, I might have to actually create builds (if I can).

That’s my issue. A game can be complicated but it shouldn’t require you tube videos to learn what the fuck to do.

You don’t need to complete the wsr within to play eidolon. You need to finish it to take out the big eidolons walking around at night.

A game can be complicated but it shouldn’t require you tube videos to learn what the fuck to do.

Yea I really don’t like doing that. It kinda spoils the game if I have to watch someone else play it to figure out what to do. Just explain it to me in game, give me a tutorial, or a information section or something.

It is no different than elite dangerous. There is a learning curve, but once you start to learn the modding and how the different warframes work you see just how deep this game is. And the fact that digital extremes just keeps putting out such amazing content. There is even hidden story in the codexes. @anon3687162 I learned alot if what I know not from YouTube videos but from trial and error and friends that play the game. While the videos can help it just takes playing and learning. Even with other games comi ng out I find I keep coming back to warframe. The customization is great and the different builds you can make and run. If you ever see me on hit me up and I’ll run you through some stuff and help out

You do realize most of these guys bailed on ED for the same reason, right?

Not me, I was space FedEx driver of the year making deliveries.

@Lala_Calamari http://warframe-builder.com/
You can pre-build shit on there to see the stats before wasting credits and endo. You can also search other builds. Problem with other builds is you likely don’t have the mods they use. I run in to this problem all the time but the builds can set you on the right track for building a certain weapon in the right direction. This is exactly like your ESO build site. Some weapons are more prone to crit, or status but rarely both. And some are just shit all together for end planet stuff.

If you can let me know what your preffered weapons are, I can work with it on that site and get you headed in the right direction.

You do realize most of these guys bailed on ED for the same reason, right?

I bailed on ED because engaging content does not come out fast enough. All they’ve done for the past year is nerf money making, weapons, and make promises of stuff to come with no date.

I’ll check out that site. Right now I’m mostly using Bows but will run with whatever. New Weapons are pretty hard to come by.

I’m using the Excalibur and Nidus Frame at the moment. I didn’t like Ivara frame as it didn’t regen health (most likely playing it wrong) and I keep dying. I am currently building a Frost and Rhino frame, they should be done in a day or 2.

Should I be transmuting mods? I’m assuming the ones I have are just basic.

@GrumpyInUt You know I wasn’t talking about you.

Which bows? Wait a minute… if you linked your twitch prime account you should have Soma Prime. That fucker is what you should use. I’m using it on level 50 enemies with very little trouble and I probably only have 1 forma on it if any at all.

Rhino and Frost will be good frames to use through that stuff. I’d use Rhino with caution though, he’s a tanky fucker and can be a crutch if you get used to him and go to another frame.

I don’t bother with transmuting anymore. Lots of credits spent and what mods I did get were not worth it. I keep 5 of any mod I may have duplicate of. I turn the rest to endo and if I don’t need endo I just sell them.

That link is with Twitch Prime, right? You need to use your Amazon Prime info, my kid took that already.

This is the bow I’m currently using. It’s maxed out. I don’t have any other main weapons on deck for leveling. I kept a few bows and my Boltor. I do have a sniper rifle that I have to level up but I’m hesitant at the moment. Might save that for later. 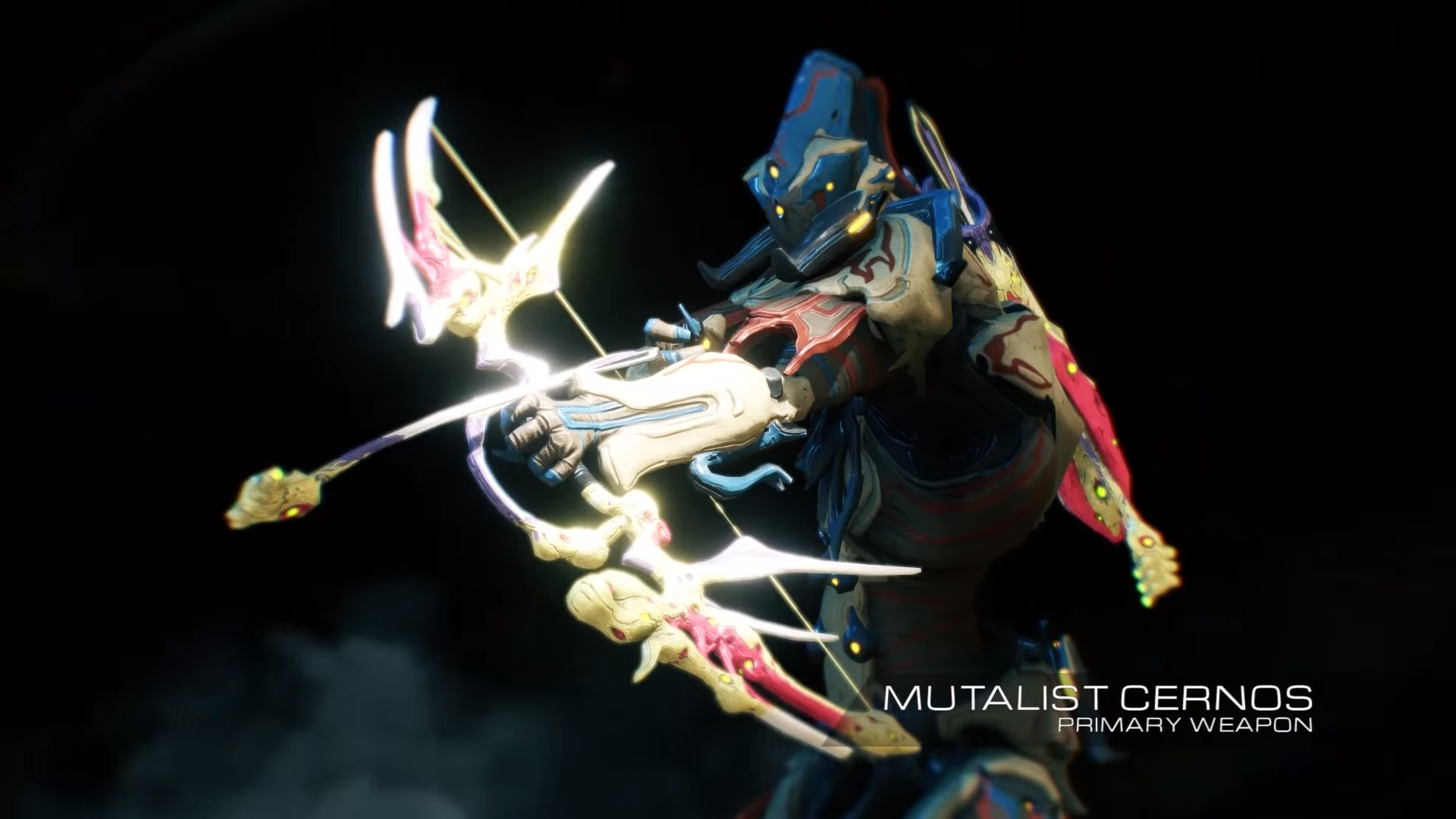 The Mutalist Cernos is an Infested Cernos, lowering critical chance for an increase in status chance. In addition, immediately after an arrow hits a surface, a spore will be summoned from above and hit that spot, creating a low damage toxin cloud...

Are either of you in a clan? If so, make him trade it to you for something cheap or you’ll cut off his allowance. It’s a prime weapon so it should be tradeable.

Edit: you’ll need to be mastery rank 6 before he can trade it to you. You have to be 6 to even build it if you get it.

He plays on PC only. And he actually plays the game, so I’m ok with him having the stuff.

I am Mastery 6. Took care of that yesterday.

EDIT:
I reclicked the Warframe Loot options on Twitch. We’ll see if I get anything.