Volcanoids - the latest in mining, crafting, and the combination of the two 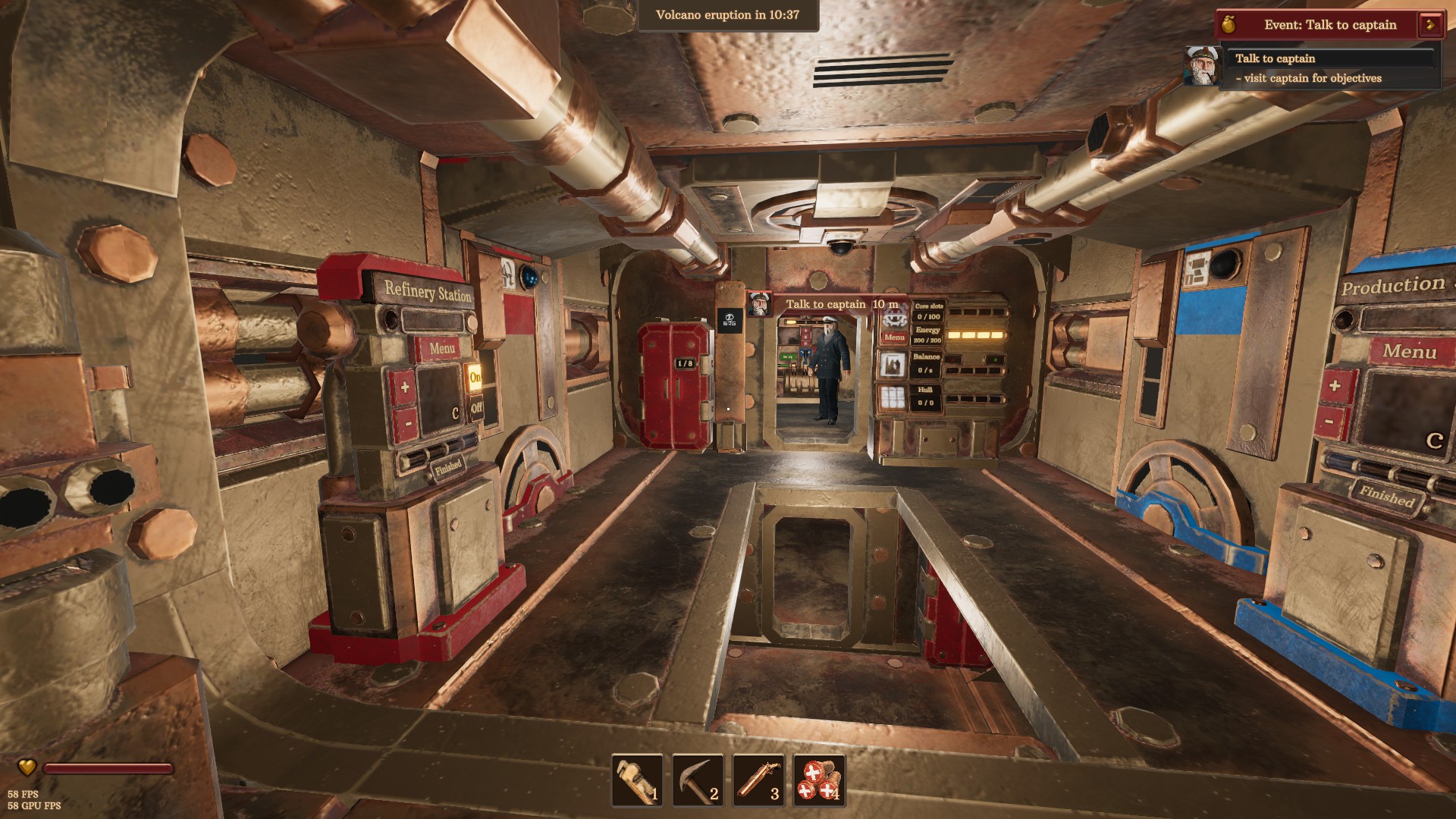 You play as the unnamed, unvoiced, unseen protagonist in a very steampunk world. The submarine you arrive on is entirely made of polished brass and is captained by the most stereotypical of ship captains.

You can immediately tell a few things from this screenshot. You start with a pickaxe. The red thing on the left says “refinery.” The blue thing on the right says “production.” You’ll be doing lots of mining and then crafting those things into other things. 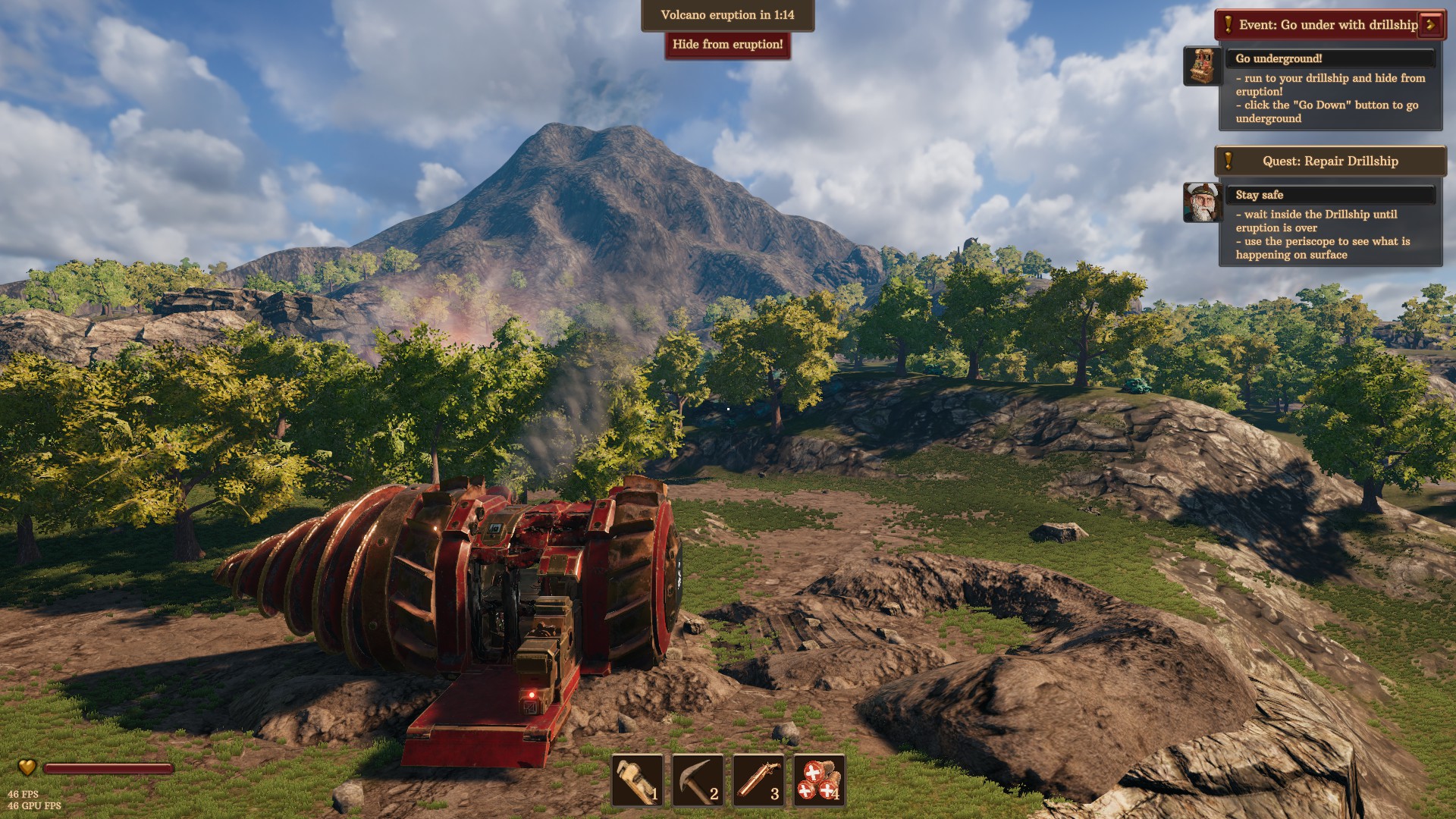 You do missions for the stereotypical captain. You get no reward for finishing them, aside from the incidentals. The initial quest chain, for instance, involves you being voluntold to mine things, voluntold to craft those things into components, voluntold to kill the evacuees of the pictured damaged shitbox, and then voluntold to install one of your faction’s ship cores for a bit of grand theft drillship. 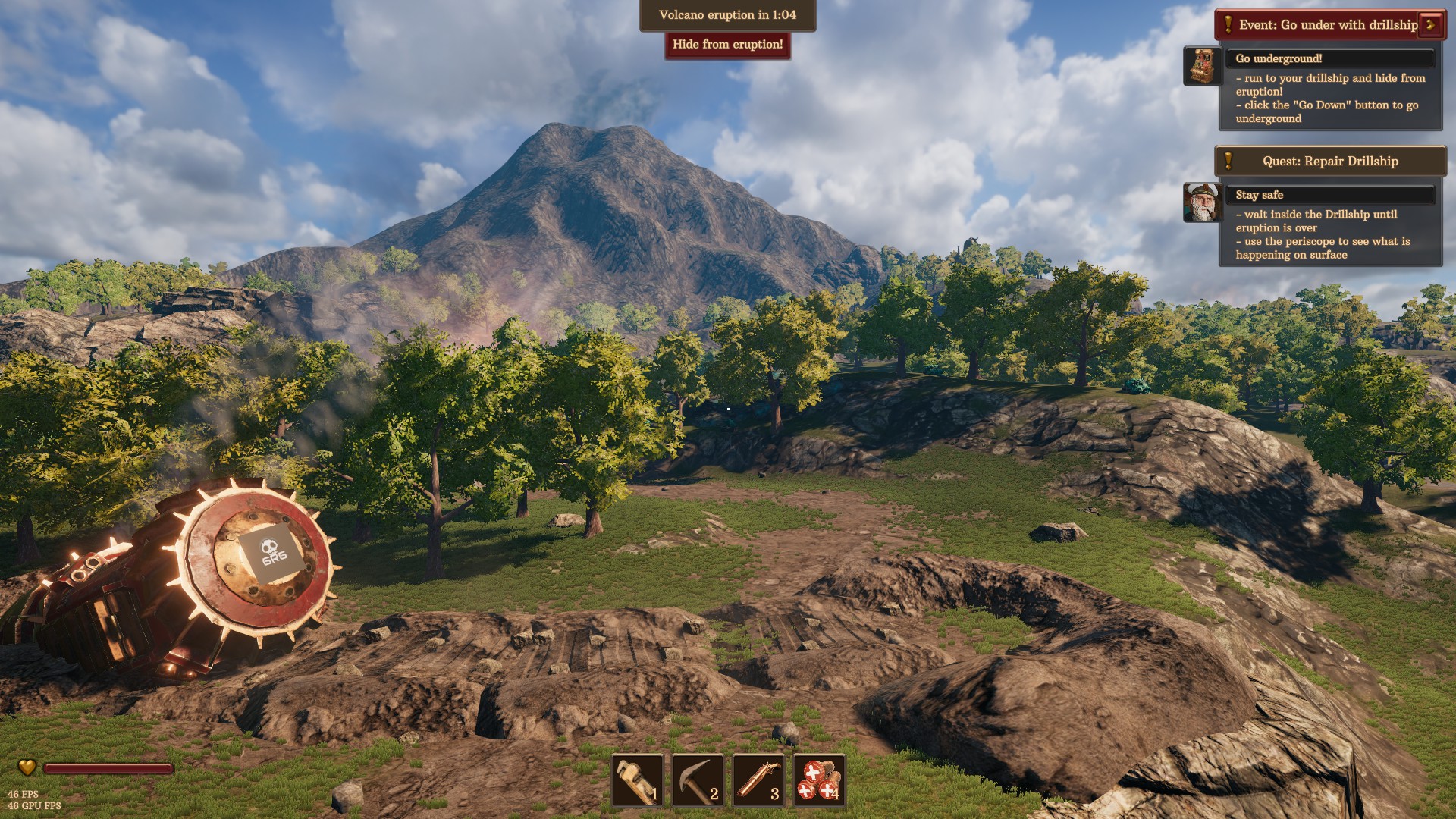 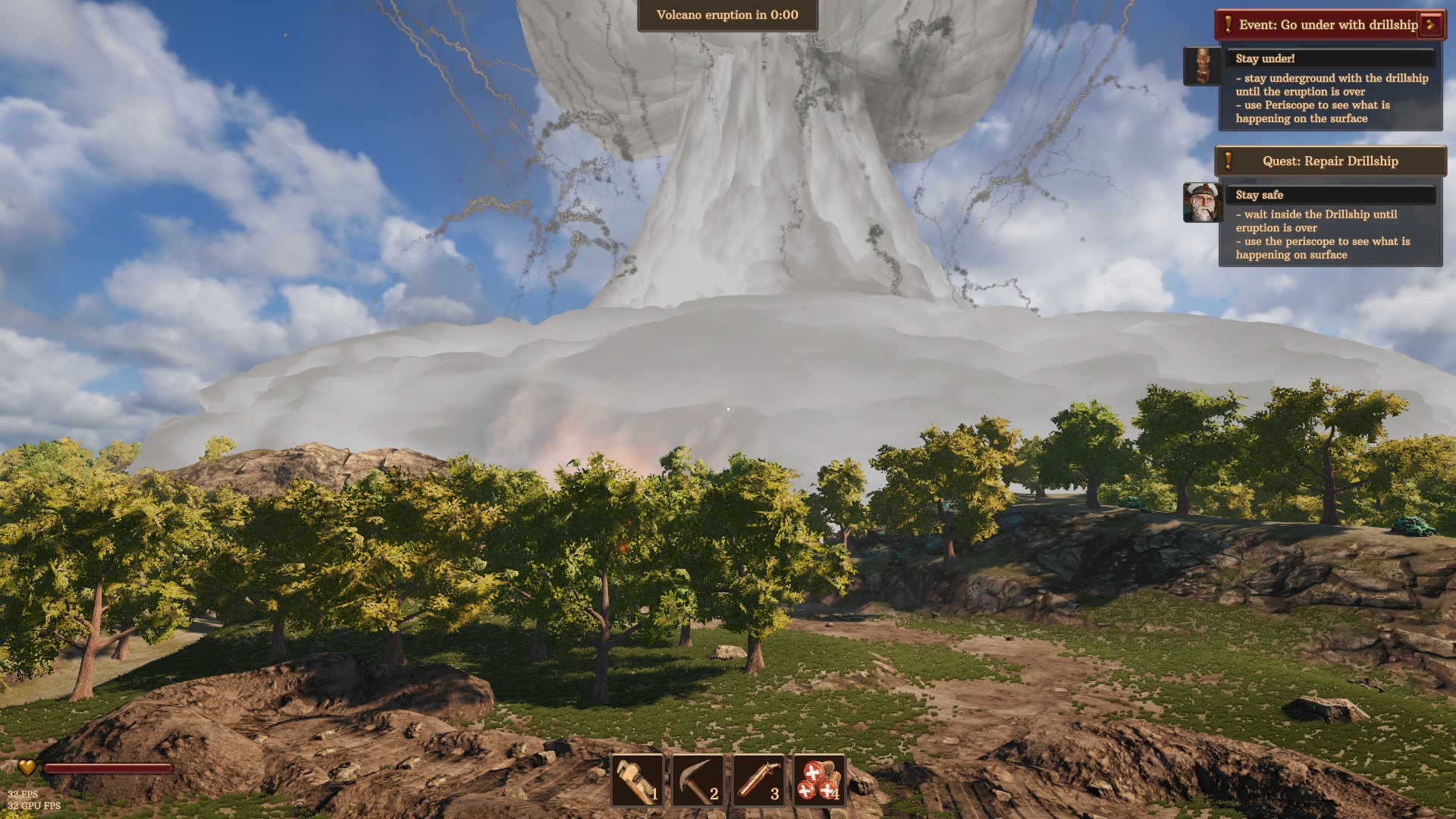 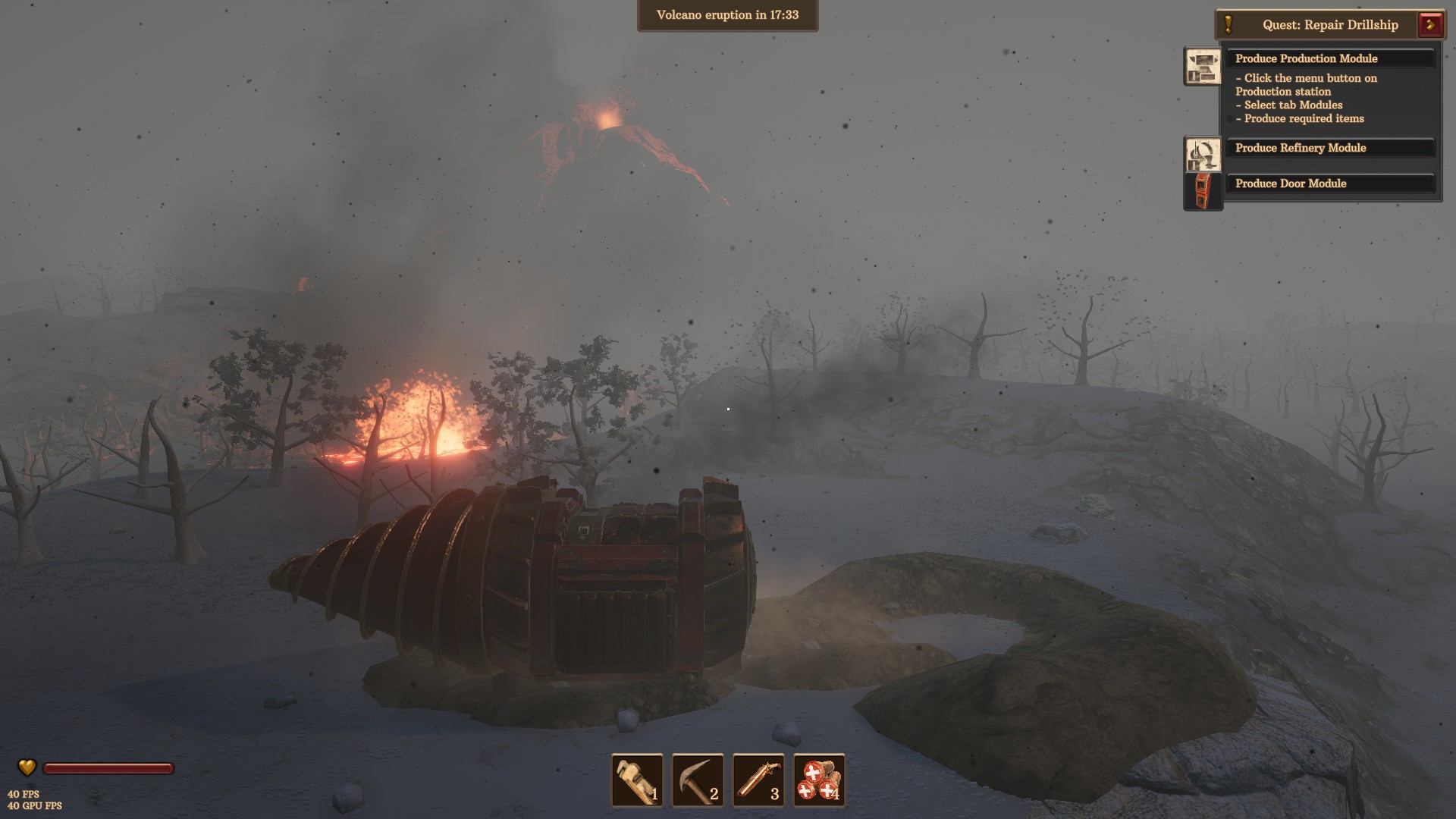 In this procession of pictographs, you can see me ramming my steely rod (flying the GRG banner) into the planet shortly before it explodes hot sticky stuff everywhere. The island recovers quickly (grass is green and trees have regrown their leaves in about a minute) and is ready to do it again in eighteen minutes.

The end goal is to stop the Cogs (enemy steampunk automaton faction we jacked our own drillship from) from doing whatever it is that they’re doing. They’ve got three drills around the volcano that you need to disable. Conveniently, you need to upgrade your ship over the course of many hours in order to reach drills 2 and 3.

This was written at the 30 minute mark. The timer is already grating on me. I’ll probably put a few hours into it anyway. Each of the two unlockable regions add a new resource and journalistic integrity or something like that demands I see them.

At the very least, I’ll revisit the game when updates occur until my access is revoked at the end of the alpha period (projected to be the end of Jan).

I received confirmation in their Discord that the first eruption is timed a bit differently. It’s only 10 minutes, I’m assuming so that it’ll show up pretty soon after you’ve hopefully taken ownership of the enemy drillship. I kind of want to start a new game and see if being incompetent leads to a Non-Standard Game Over. That at least explains my experience and I’ve updated the review text to reflect that.

Combat and adversity. That’s what most of the games I play feature, and this one is no exception. 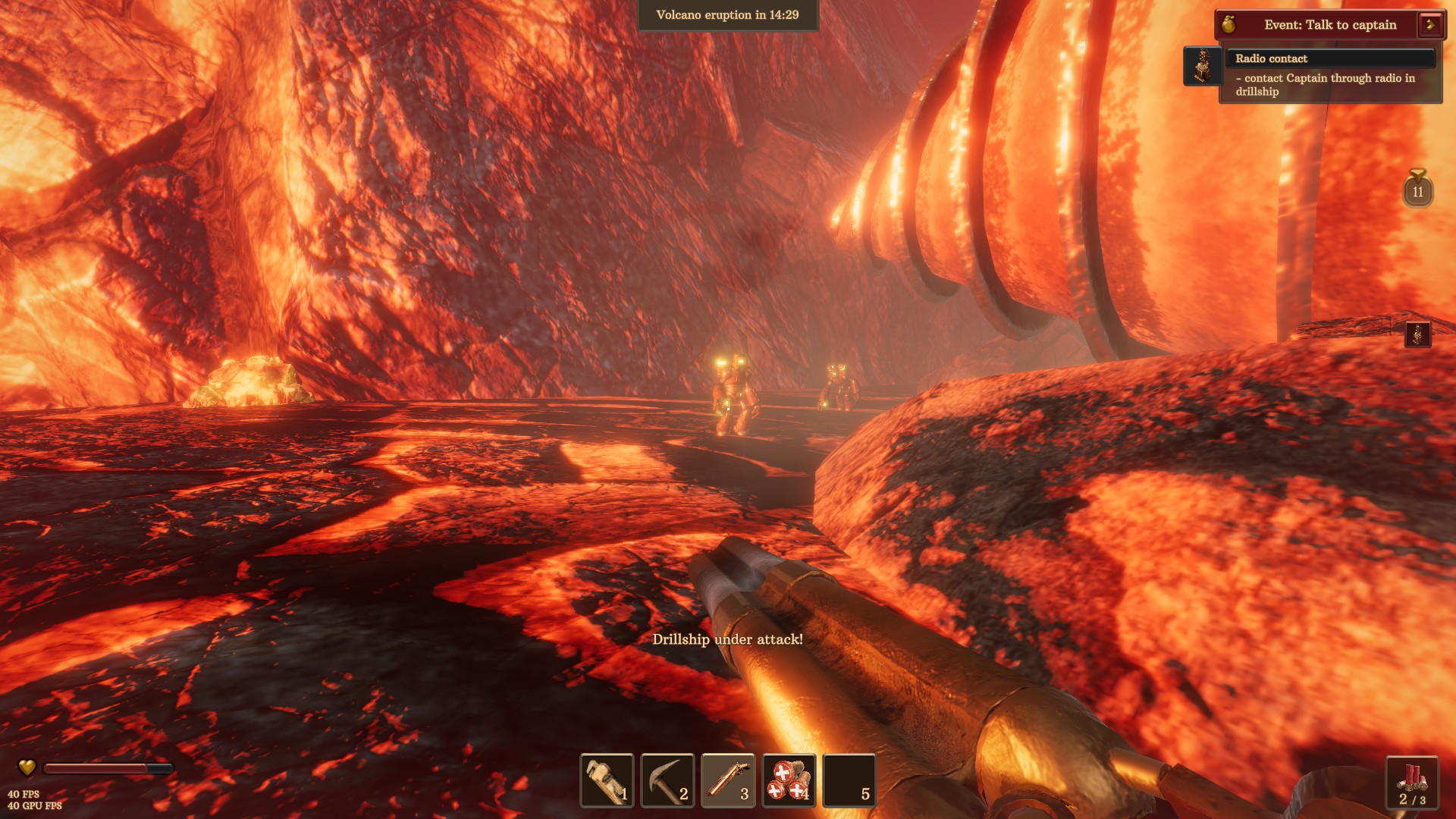 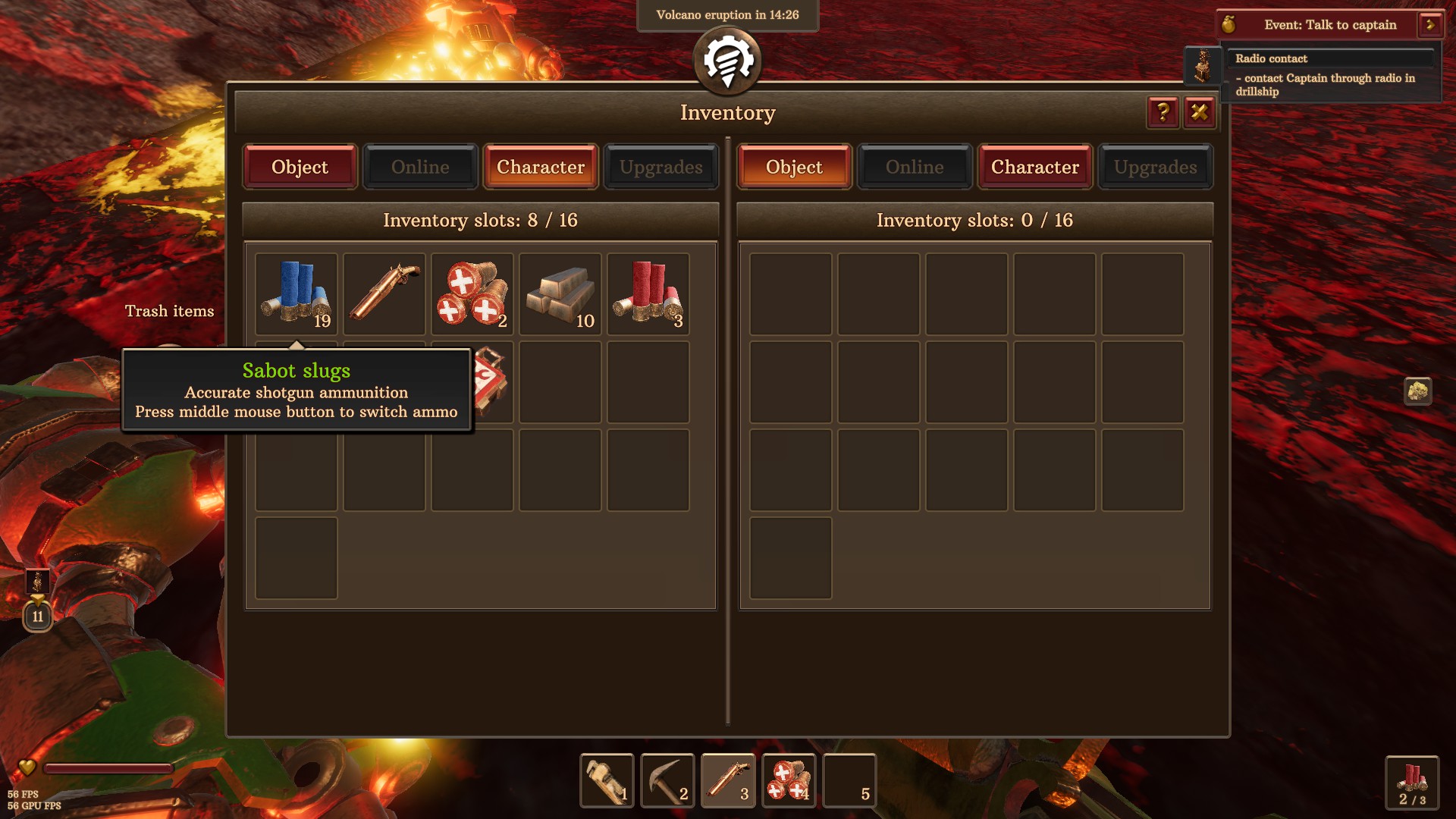 I haven’t gotten close enough to really examine the enemies so I can’t tell if there’s only one type or if the two guys in this image are subtly different. In any case, you’re both equipped with two-shot shotguns and should shoot each other on sight. Not pictured, there are two parking spots around the first volcanic area. I couldn’t stop at the first one I chose because there was an enemy drillship there. It periodically drills beneath the surface only to pop up later and release all of the enemies within it. They’re difficult to assault, having at least one turret module installed. Discord chatter led me to believe that you could take one over if you installed your faction’s core in it.

After killing enemies, you can do what your gamer instincts tell you to and loot the bodies. You can get loads of crap this way. Back when I made my first post, you seemed to only get the simplest building components. An update must have happened as I looted new ammo types, structures that you can place in your drillship, and higher-tier components as well. 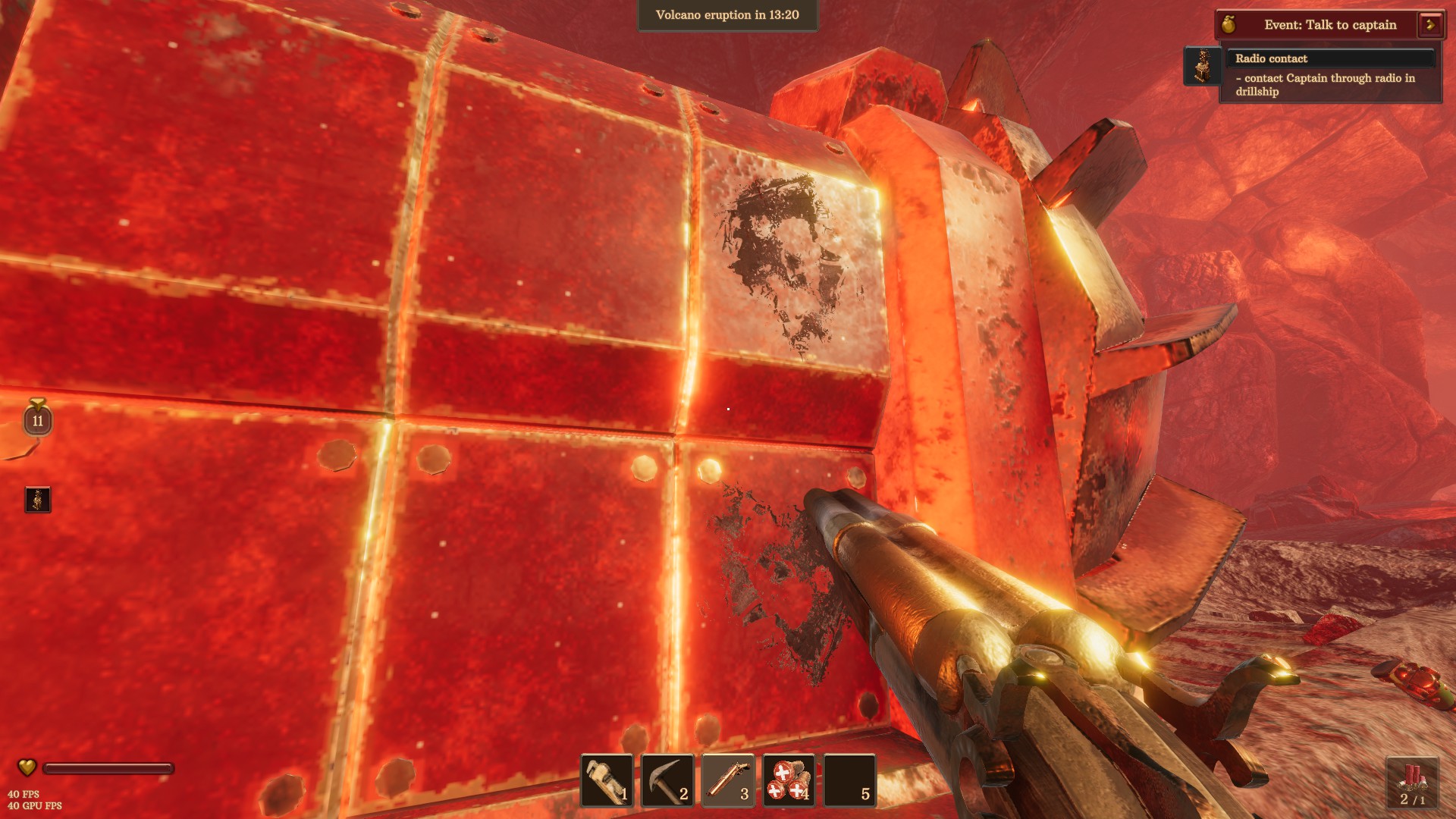 Turrets. Something that, at this point, aren’t really explained. I have since lost the relevant picture, but before I realized turrets were a thing, enemies destroyed every single module on my drillship. You’ll have to settle for the above “damaged wall” image instead. You can tell visually how damaged a thing is. Not destroyed? Looks like that. Completely destroyed? I refer you to the “damaged shitbox” section of my first update - holes in the walls big enough to walk through. 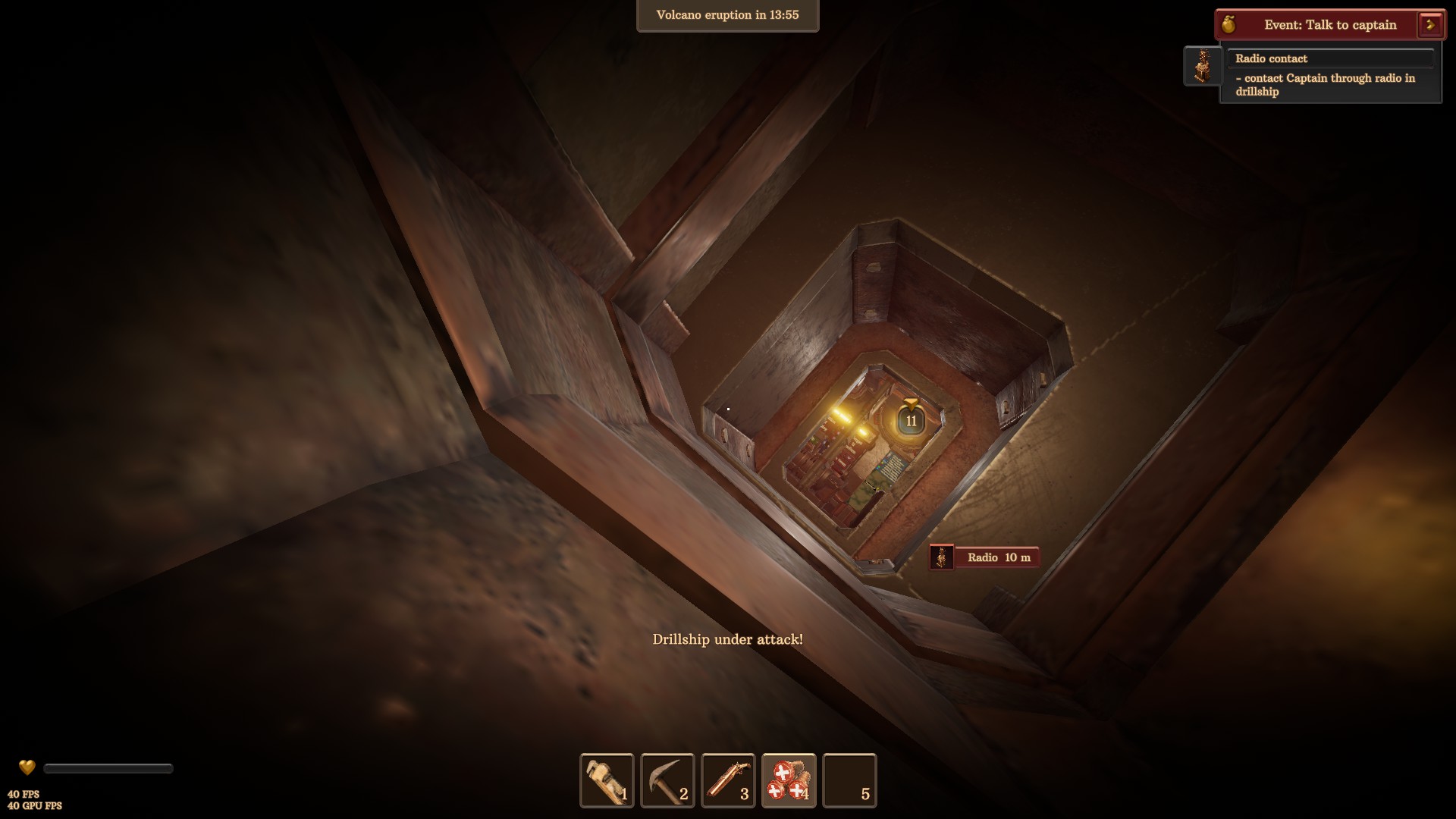 You can recover from just about anything. Enemies destroyed all of your modules? Pop around the map, mine a shitload of resources, and head back to map location 1. Your sub is still there, its crafting machinery available to craft replacements. But the only fix for death is loading from your last save. 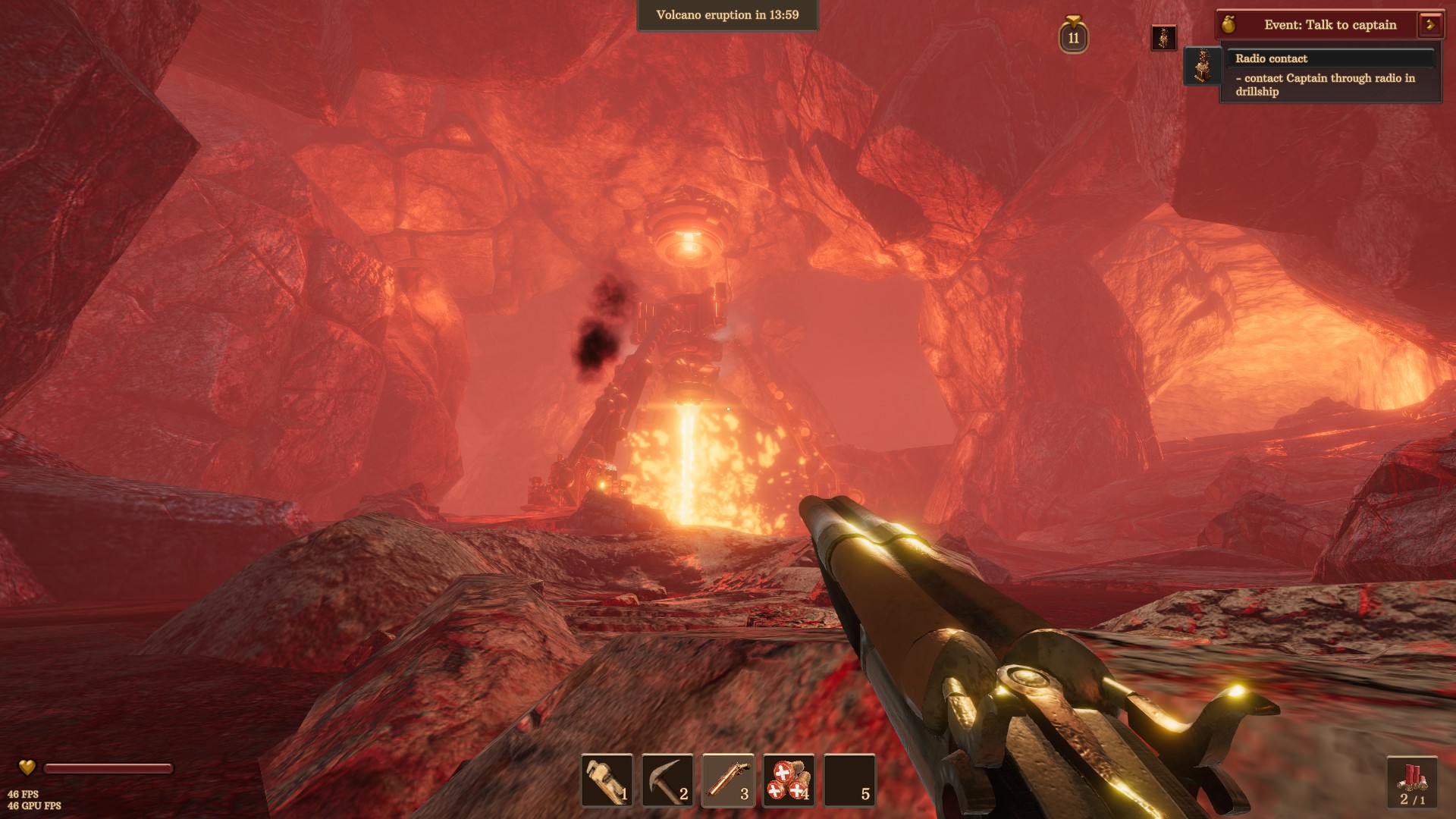 I’ll leave you with this. I have no clue what it is. I’m assuming it’s a massive improvement on the objective system. During my last update, the objective was “run up to the enemy drill thingy, press ‘E’, and it disappears.” This looks like something that’ll actually be interesting to mess with.

It’s likely too late for you to get in on the closed alpha. Given the improvements I saw over just the past week, I’d seriously consider a purchase. Maybe when multiplayer is a thing.