Ubisoft has one major unannounced AAA title from one of its biggest franchises due to release before March 2021. According to the company’s latest financial report, Ubisoft has what they’re calling “the most ambitious line-up of the industry” in terms of games releasing this fiscal year. 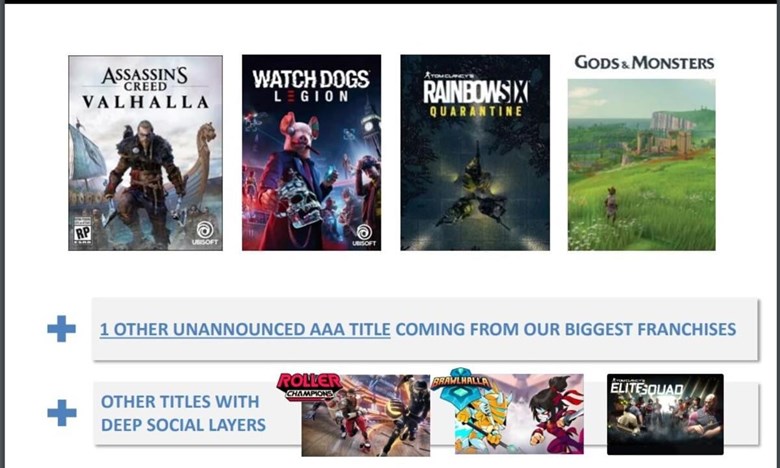 On page 15 of the report, it lays out what games Ubisoft plans to release during this financial year. Assassin’s Creed Valhalla, Watch Dogs: Legion, Rainbow Six Quarantine and Gods & Monsters are all titles we already knew would be launching in the future. However, Ubisoft also says it has “one other unannounced AAA title coming from our biggest franchises.”

It’s unclear what this unannounced AAA game could be, but rumours have been circulating for a while now that it could be a new entry into the Splinter Cell series. It’s been years since Sam Fisher has had a full outing. He’s appeared in both Tom Clancy’s Ghost Recon Wildlands and Ghost Recon Breakpoint, but we haven’t had a new Splinter Cell game since Blacklist. We could also be looking at another Far Cry game after the successes of Far Cry 5 and Far Cry New Dawn.

The report also details other smaller titles due to launch this year that have “deep social layers”, including Roller Champions, Brawlhalla and Tom Clancy’s Elite Squad.

Whatever this unannounced AAA title may be, we’re sure to hear more about it at Ubisoft’s “E3-style” press conference, Ubisoft Forward, taking place on July 12th.