Two Warnings About ‘Destiny 2’ Umbral Engram Bugs You Should Know

Two Warnings About ‘Destiny 2’ Umbral Engram Bugs You Should Know

Destiny 2 is having a few issues with Umbral Engrams that you should know about.

While I know that everyone is missing their Umbral AFK farm, considering the game was also patched to stop regular Umbrals from giving out powerful drops, it doesn’t really matter anyway. And if you’re like me and starting to play well, any activities, you will be drowning in Umbrals soon enough, so sources of them aren’t a problem (getting Altered Element? That’s another story).

The problem is that there are…two new problems that have to do with Umbrals, and this time, neither of them are working to our benefit.

You may not be in the position to have to deal with this first issue yet, but if you’re like me and have been running three characters to get Twisted Energy, and turning in a load of Umbrals, you have probably unlocked a row 3 decoder perk this week that allows you to get double final perks on focused engrams.

This is similar to what the Sundial let us do eventually before, but there’s one issue with this perk, it does not work on the battle pass weapons, the Cold Denial Pulse Rifle and the Falling Guillotine Sword, two of the best weapons this season.

image960×540 159 KB
We had various battle pass related issues happen last season as well, and this could be something similar here, but focused engrams are only giving one perk on each of those, though I have found the double perks work elsewhere. The point being, if you are going to farm those two weapons, you probably want to wait until this is fixed, as with double perks, every drop is essentially two chances as the roll you want. And with Altered Element in short supply, you don’t want to waste it while this is bugged. So either save those Umbrals or focus them into something else.

Update : I am hearing that some people have gotten these two to drop with double perks after focusing, so it may not be a consistent issue. But it does seem a bit risky at the moment, so be careful. I literally just did this thirty seconds ago and it did not work.

The second issue is not quite as major, but Twitter saved me from making this mistake yesterday. 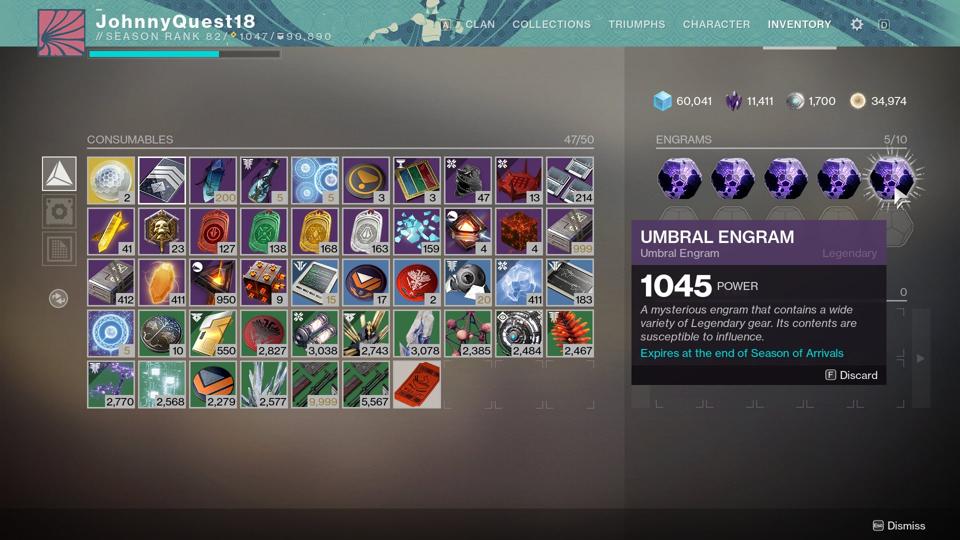 However, something is wrong with the focusing system where if you go “oh great, I can focus that into a specific weapon slot or armor!” you actually…can’t.

When you focus a powerful Umbral it actually knocks its power down to the “normal” level. But if you decrypt it while it’s unfocused, it will give you a powerful drop of some kind, keeping that higher level. You just can’t pick the drop. I don’t think this affects the powerful Umbrals you get from the machine at reset weekly, but for ones you pick up from vendors, don’t lose an entire powerful drop because of this.

Are there more issues with Umbrals? Probably, though I haven’t found them yet. I have seen weird stuff with the decoder ranks, like I had already unlocked the “collect 15 motes for Contact for heavy ammo” one without actually purchasing that upgrade. But no one is complaining about that.

But yeah, these bugs aren’t fun like the AFK powerful farm was, so be careful.

Good to know. I don’t have the 3 character issues but cool you are on the level 3 perks already. I haven’t looked at those benefits yet.

Valiants a sweaty tryhard… I don’t condone that type of behavior in GRG!