So who watched the first episode? Thoughts? I really liked it a lot. Too bad I forget most of what happened in the comic book. My favorite character has to be Cassidy, the vampire. Also really thought that fight in the car in the cornfield (JH was probably so upset over all that lost corn. Lets pray that was a CGI cornfield) was pretty bad ass.

Ugh I think I forgot to record this. Will have to catch a replay and make sure I DVR the rest.

Two words for you, Bit Torrent. 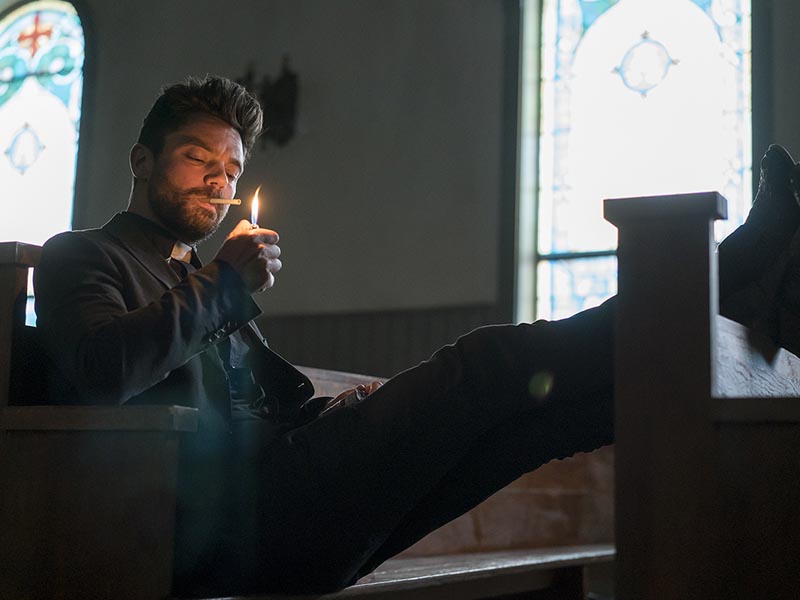 Jesse struggles to escape a past of crime and violence. A renegade angel-demon spawn comes to Earth looking for a host. And an Irish vampire named Cassidy lands in Texas.

Since I hadn’t read comics did’t knw what heck was going on. What’s up with the sherrif’s kid, straw face?

His name is Arseface. I’m sure they will get to it but he tried (and failed) to pull a Cobain.

Yea I may have to pick up the comics again for a refresh on how close everything was. I didn’t know or forgot if Tulip was a badass. I knew she was tough but damn. And I think JH cried over that scene and is writing in his will that’s how he wants to go.

I liked it. Not sure what exactly is going on but it will all make since later.

Satellite decided to take a dump at 10 mins in so i missed about 20 mins of the show. So i am completely clueless as to what the fuck is going on.

Know nothing about the comics and have no clue what the hell was going on but am intrigued.

Finally watched it on an AMC app, this show is my thing. Love the humor as well. “Tom Cruise Exploded”. Writing seems good, actors are alright. Know nothing of the comics so it’s all fresh to me.

That mid flight massacre was something else.

Reminded me of the Kingsman.

Sucks that with Memorial Weekend this Sunday is just a repeat of the first episode.

For some reason this series reminded me of Carnivale from HBO, I hope it doesn’t leave you hanging like that series did at the end.

No, Vampires exist in real life.

I really liked it. Though admittedly Cassidy was what sold it for me. I’m really looking forward to it. A lot better than I was expecting.

I think Cassidy made the comics as well. Fun character.

FYI, a little info on the comics, I picked them up again to read thru as I needed a refresher. I have read them twice now and always find something new that I must’ve glossed over before.

There are 66 books and a bunch of other stories that are available. The books started in '95 I think and are about 35-40 drawn pages. They are a bit longer than the comics now, where walking dead is usually around 25 drawn pages. The artwork is a bit dated but that is also part of the mystique.

I enjoy the books and there are a few differences so far between them and the show. I think it makes the show better and I’m glad that the differences exist.

Exactly my thoughts as someone who doesn’t know the comics. I have no clue what the hell is going on at all though am enjoying it.

I have read the books, and I’m rereading them now. That being said, I’m confused on parts and what is going on. I think they are getting a baseline down and it’s their way of bringing backstory to the characters but doing it in a fucked up way. All of this is good, especially for those of us who have read the books as its a fresh take.