Destiny 2's Worthy Seraph Bunkers seem like they're going to take forever to upgrade, but that's not actually true if you pick the correct order and know how to earn bits.

In Destiny 2 ’s Season of the Worthy, Rasputin Seraph Bunkers are the new Obelisks, though upgrading them this time around seems to be a bit less straightforward than last time. Many players seem lost as to what to do, and believe progress to be incredibly slow. But once you figure out what’s going on, it’s not quite as bad as it looks.

So, first step is to get the bits you need for the upgrades. The best way of doing this, like with Fractaline, is to do bounties on all characters. You will get 200 a day from daily bounties and 200 a week from weekly bounties per character, so if you can manage to run them all on three characters, that’s more than enough to fully upgrade a bunker in a week. (Tiers 1-3 upgrades give you 1-4 chipsets respectively that you use to upgrade the bunker).

Past that, there’s an unlock that has you get 12 bits per repeatable bounty from Rasputin, and those are infinite. You get 6 bits from the EDZ Tower event if you clear it (4 from failing it). There’s another upgrade that gives you bits at times from doing strikes, Gambit or Crucible. I’ve only run a few since I bought it, but I was getting 30 bits after 10 minute Nightfall Ordeal runs.

Once you start getting the bits, you’ll want to know what order to upgrade the EDZ bunker in. I didn’t pick the most wisely myself, but now I know better, so here is the order I would do. Explanation follows. 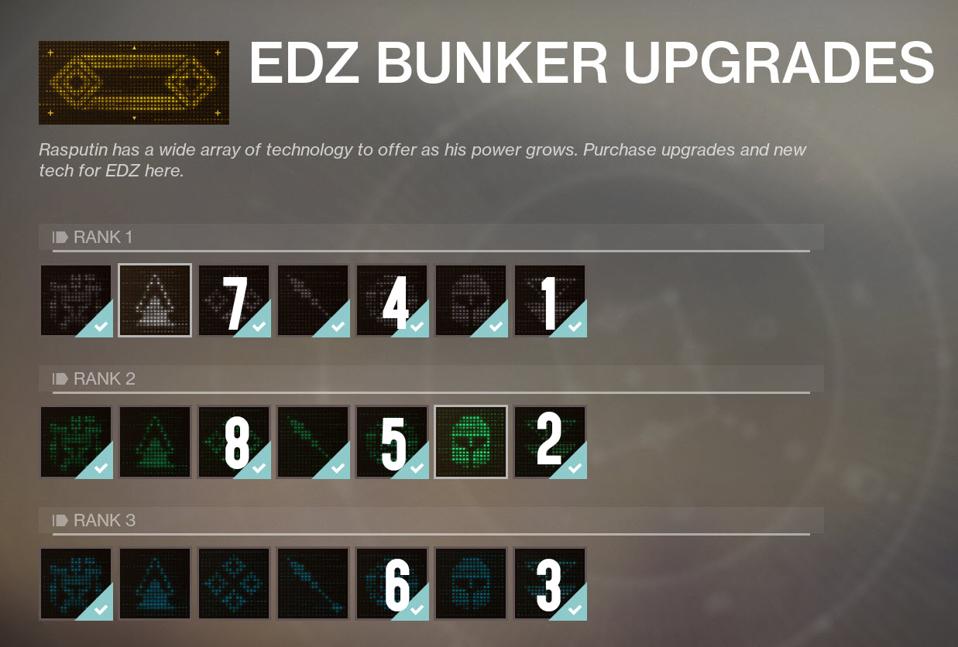 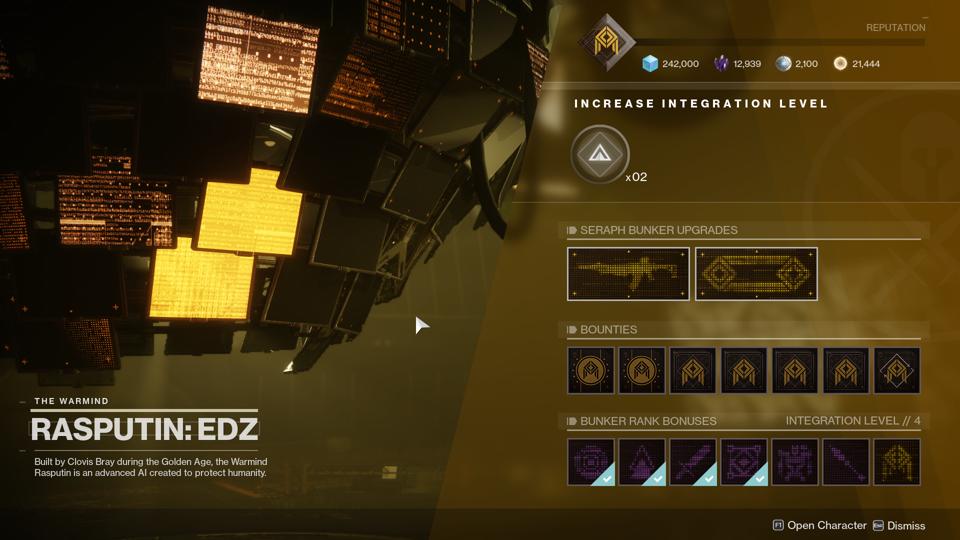 So, I stop at number 8 here. Why? Because after that, I really think it’s up to you and what you want to do. These are essentially all the “collection” ones, and after this, you have things like resource collection (which I really don’t need urgently) or upgrades for mechs and javelins that can be used in the EDZ tower event, bunker clearing or Legendary Lost Sectors. I did the mech upgrades first, but quickly realized everyone else would be getting those upgrades too, so they weren’t exactly top priority.

This is my strategy for getting the Warmind Bunker leveled pretty quickly, and I expect to probably be done with the whole thing by the end of the day, and that’s without anything crazy like hardcore repeatable bounty grinding. In short, it’s not as daunting as it looks.

Sweet guide, I wish I had used this…