I found this to be a shocker. A lot of ppl love drive club, especially since there isn’t many racing games on playstation.

Source: Kotaku
Few games this generation have given me as much fun over a long period of time as Driveclub. It wasn’t exactly a gift, but one thing is for sure: it kept on giving. Yet, the studio behind it is no more, as Sony mentioned in a statement reported by GamesIndustry.

“Regular reviews take place throughout SCE Worldwide Studios, ensuring that the resources that we have in such a competitive landscape can create and produce high quality, innovative and commercially viable projects.

As part of this process we have reviewed and assessed all current projects and plans for the short and medium term and have decided to make some changes to the European studios structure.

As a result, it has been decided that Evolution Studio will close.

It is regrettable that this decision will lead to compulsory redundancies. We accept that this decision will mean that we risk losing high calibre staff but by focusing on other Studios that already have exciting new projects in development we believe we will be in a stronger position going forward and able to offer the best possible content of the highest quality for our consumers.

Where possible we will try to reallocate people onto other projects. If appropriate opportunities are not possible within the company, we will assist staff in any way we can, including speaking with local employers and with other development companies.

Evolution has been an important part of SCE Worldwide Studios for over 10 years – working on ground-breaking racing titles like WRC, Motorstorm and DRIVECLUB.

This decision should not take anything away from the great work that Evolution has produced.”

Personally, I’m absolutely stunned. Driveclub had a rocky start due to problems with the servers, but Evolution Studios turned it around in a masterful way, producing an enormous amount of new features and content, and building it up to one of the best racing games of this generation.

Two tweets were sent out from the game director and the senior community manager. 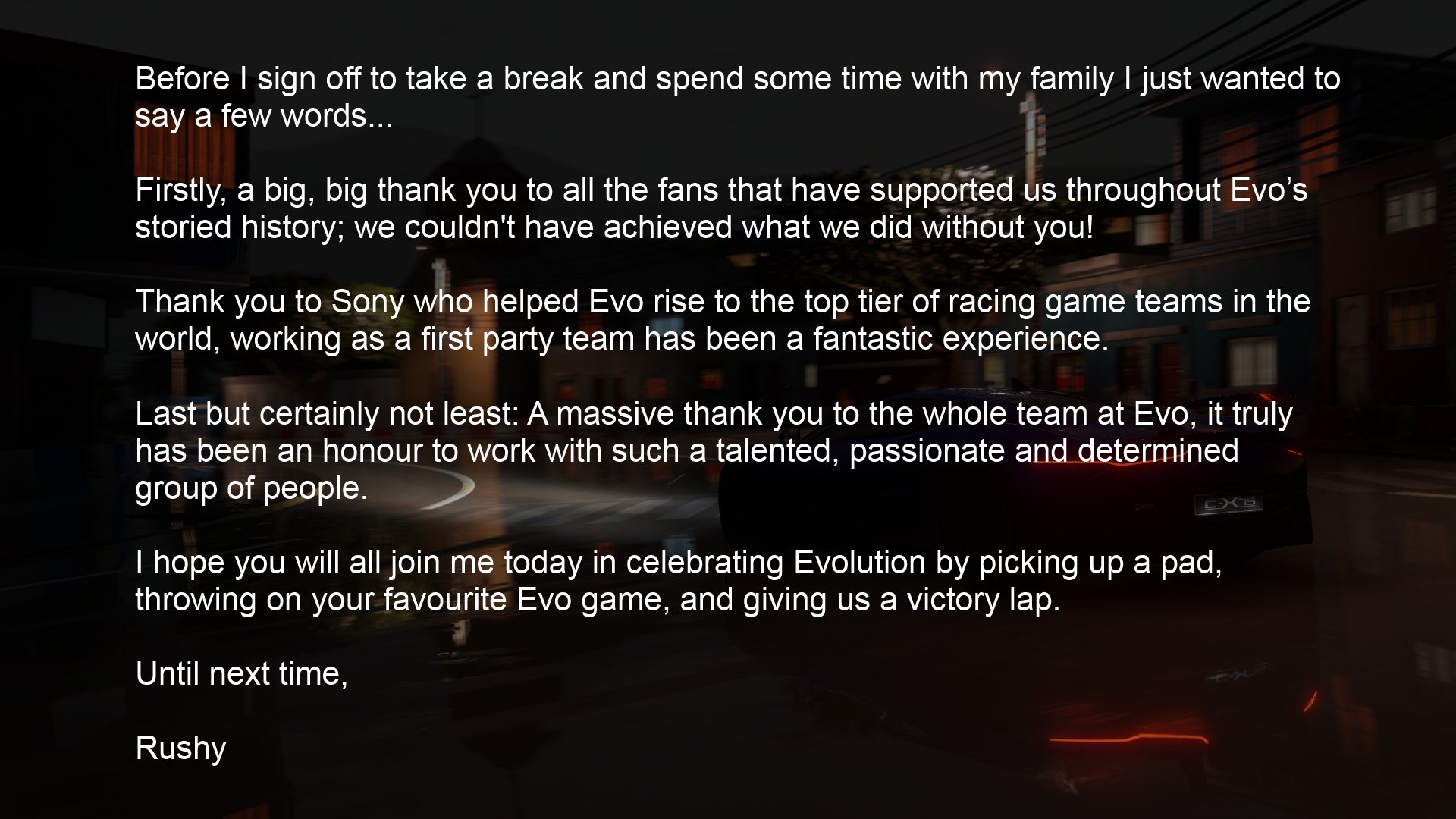 I've had an incredible time working for #EvolutionStudios, here's short statement from me: 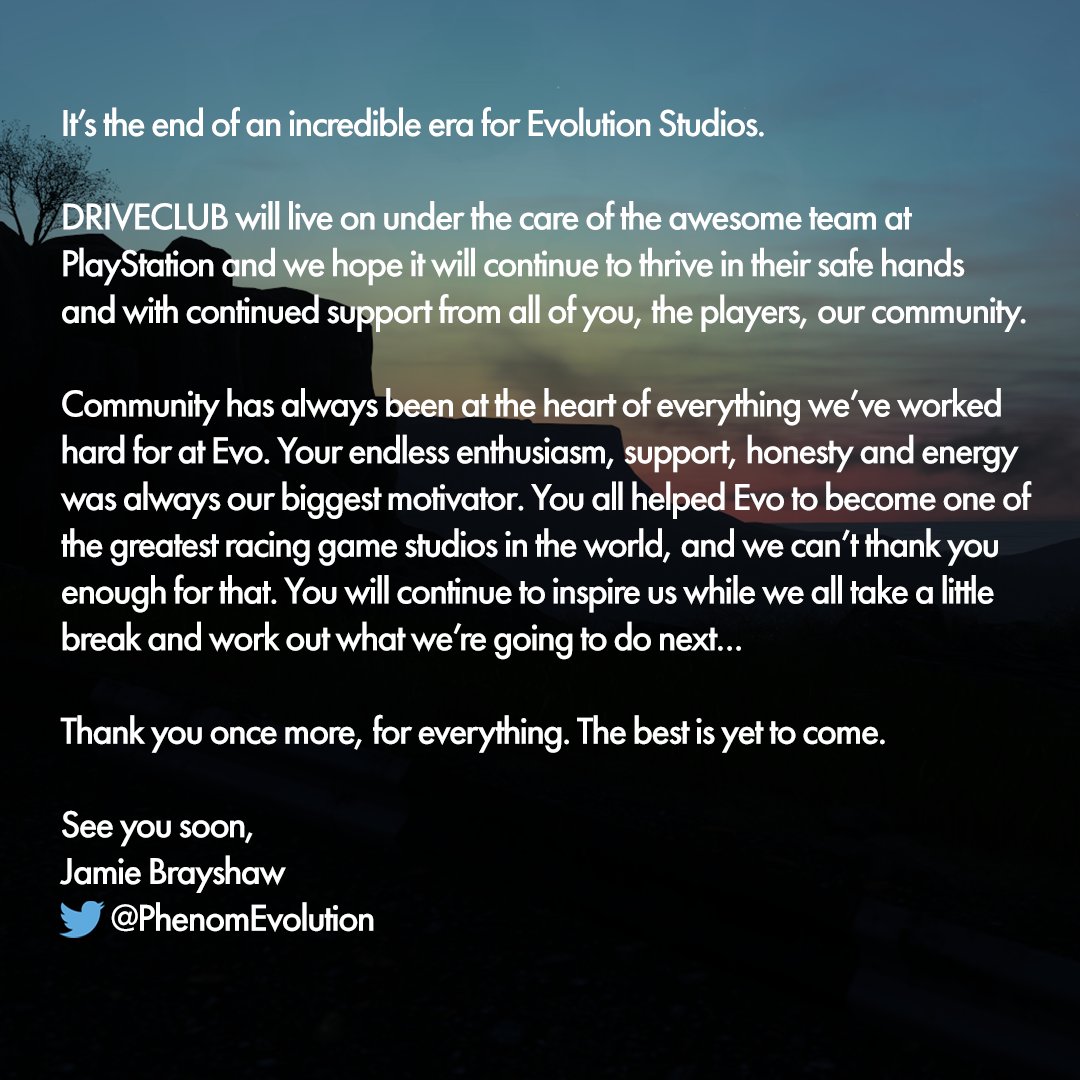 It’s the end of an incredible era for #EvolutionStudios. Thanks to all of you: https://t.co/YYPJNvbMxd #DRIVECLUB

I guess the “Finish Line” title of the latest Driveclub expansion, that actually released today, now has a whole new and definitely sad meaning

I wanted to play this game so bad the first time I watched a trailer. So much hype only to be told I couldn’t even play the F2P version because of server issues and that if I want to play I have to buy the game. Well fuck ok I will buy it then. Oh wait we aren’t selling it anymore right now until it is fixed. It just sucked and the funny thing is I didn’t buy a PS4 until the white one came out. So that just shows how long the problems lasted.

I think I have it now. I may have raced once. It seemed like a good arcade racer and it looked really nice. It is a shame. Stop putting out broken game people!

Yeah it was supposed to be a launch game, but was released a year later, with a super shitty launch and practically broken.

This makes 4 Sony studios shut down without opening or acquiring any new ones… this is the biggest out of them.