After testing out some of CoD: Cold War’s Sniper Rifles in Warzone Season 3, TrueGameData has discovered the startling revelation that they have been secretly nerfed.

Along with map changes and weapon nerfs, Warzone has undergone significant changes in the last few weeks since it ditched the Zombies and started fresh in Season 3.

The battle royale is still completely integrated with Call of Duty: Black Ops Cold War and weapons such as the LW3 and ZRG 20mm have been popular choices for many players. However, this may not be the case as the discovery of secret nerfs may negatively impact their usability.

He tests them out and compares the data to other weapons and against previous states of the gun.

The first weapon to be looked at was the Pelington 703, with the bullet velocity of the Sniper Rifle down to 967 from the 1050 region.

It appears as if the 27.2″ Combat Recon barrel has been nerfed with Anthony saying, “The Pelington was in a good spot before, but now it’s kinda pointless, like there’s no reason to use the Pelington over the [Kar98k].”

At one point the LW3 Tundra was an extremely popular choice for Sniper Rifle enthusiasts thanks to its incredible bullet velocity. Anthony says it was around 1250 and was “the fastest in the game with the Combat Recon [barrel]”

But upon closer inspection, using the Wrapped Suppressor and the 29.1″ Combat Recon drops the bullet velocity to a shocking 1130 . According to Anthony the LW3 is now “slower than the HDR and the ZRG.”

“I don’t know why they did this, I don’t know if it was on purpose or not, but there’s literally no reason to use the LW3 now.”

Interestingly, despite the same barrel now affecting the LW3, Pelington, and even the M82, Raven Software appears to have left the ZRG alone.

“The ZRG somehow dodged that nerf so with the Combat Recon barrel, even though this is a Cold War gun, you still get the same bullet velocity as before – so it’s the fastest still”, Anthony explained.

At 1230 , the ZRG still retains the fastest bullet velocity, making it one of the best weapons to use in Warzone Season 3. 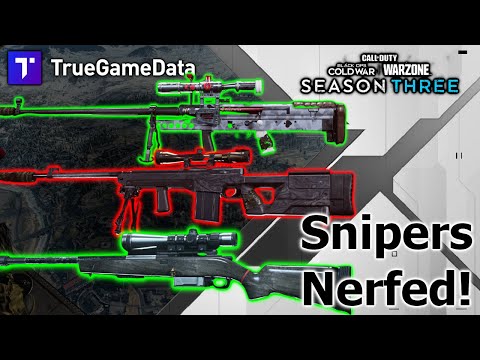 We don’t know why these changes have happened or why they haven’t been properly documented. It’s either a mistake with the barrel and the guns, or Raven wanted to keep it a secret. Either way, the HDR, Kar98k, and ZRG 20mm are now your best bets for success in Warzone Season 3.

The first weapon to be looked at was the Pelington 703, with the bullet velocity of the Sniper Rifle down to 967 from the 1050 region.

Which is why I dumped this. The rifle didn’t feel right. Just bad overall. It used to be solid, a little worse than the KAR but only slightly. It made up for it with the lack of scope glint. Then they nerfed it and it felt like junk.