So been meaning to do this for awhile and it took a pandemic to get my moving on this project. I started building a Retro Arcade cabient. Using a raspberry pi running retropie as the os. It is very easy to use, has a ton of emulators built-in and a nice themable interface that can be used with a joystick. 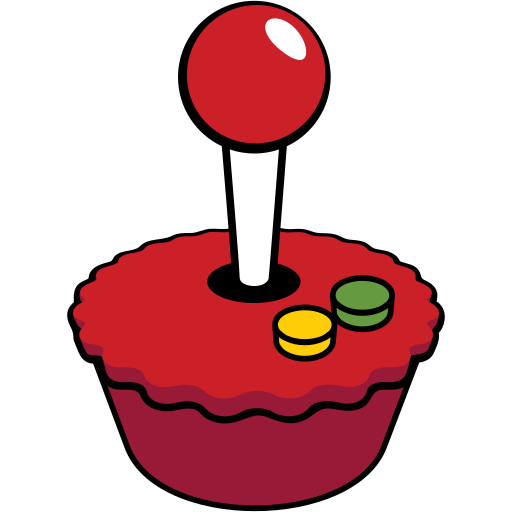 Retro-gaming on the Raspberry Pi

The cabinet I found on Etsy its pre-cut MDF that you just need to put together, paint and decorate as you see fit. 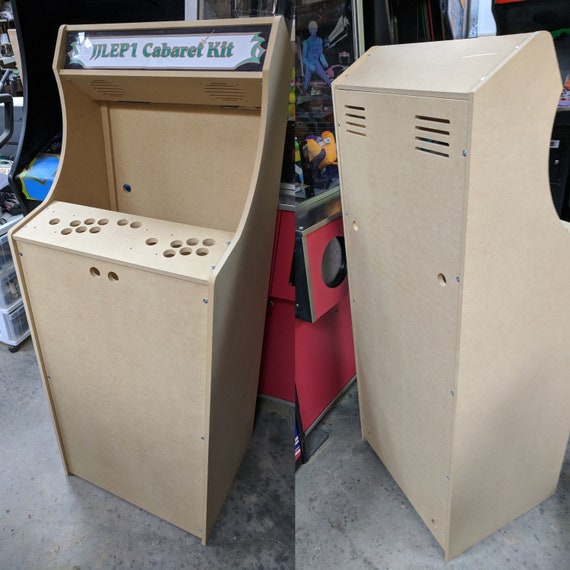 Controls and Monitor I got off Amazon 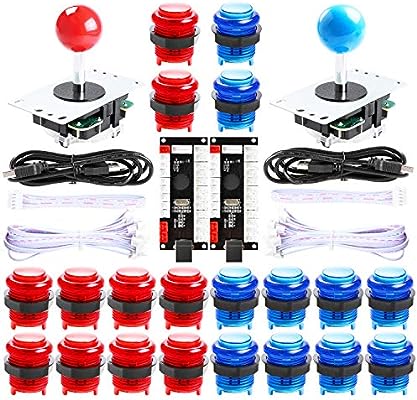 Audio I got this little 2ch amp 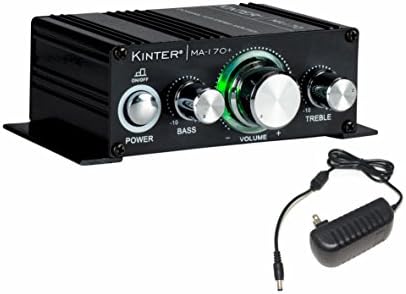 Current Status: I have it built and primed. Trying to decide on some vinyl and paint designs that I want to do. Also waiting on some mount screws for the monitor. 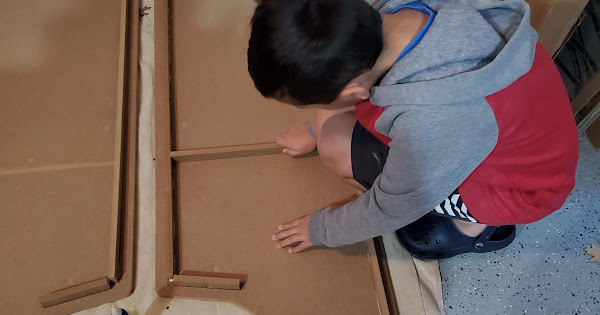 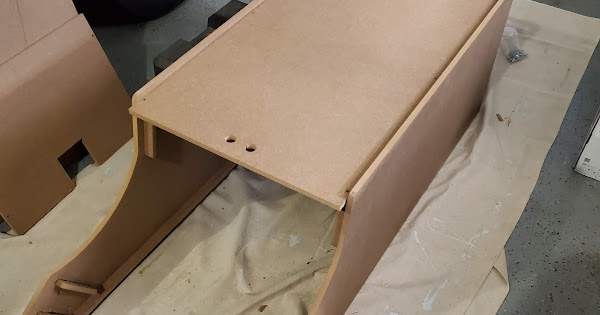 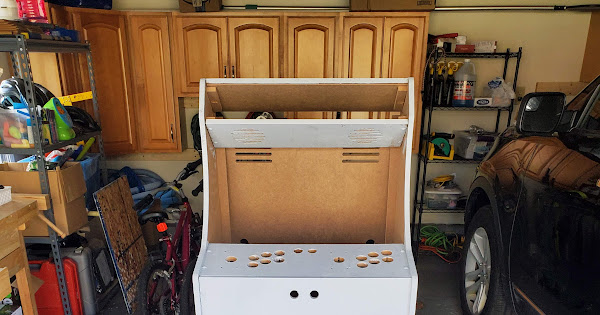 That is really cool! I’ve seen similar builds and had thought of attempting myself. Looking forward to end results.

Super cool! Did any of the kits you get come with the buttons or joysticks? You using the standard buttons for it? What about power to the thing? Curious how you are wiring it all up. Will you out a trackball in at some time for the centipede style games?

This is super cool and I’ve been meaning to do something like that but never had the time. Maybe I can float it by the wife to approve. Would be a good project for the family as I could get the girl to put her artwork on the cab.

Yeah will take pictures of the wiring, wanted to get the painting done before i had the buttons and stuff in.

This is the joystick kit i got.

Connects via usb to the pi

I was thinking of adding a ball later on. Do have the space to fit in on the cabinet.

That cabinet is a little nicer than my test mock up. Also, those Zero delay USB encoders will probably be easier than my old IPAC keyboard emulator I used (although I got it to work). 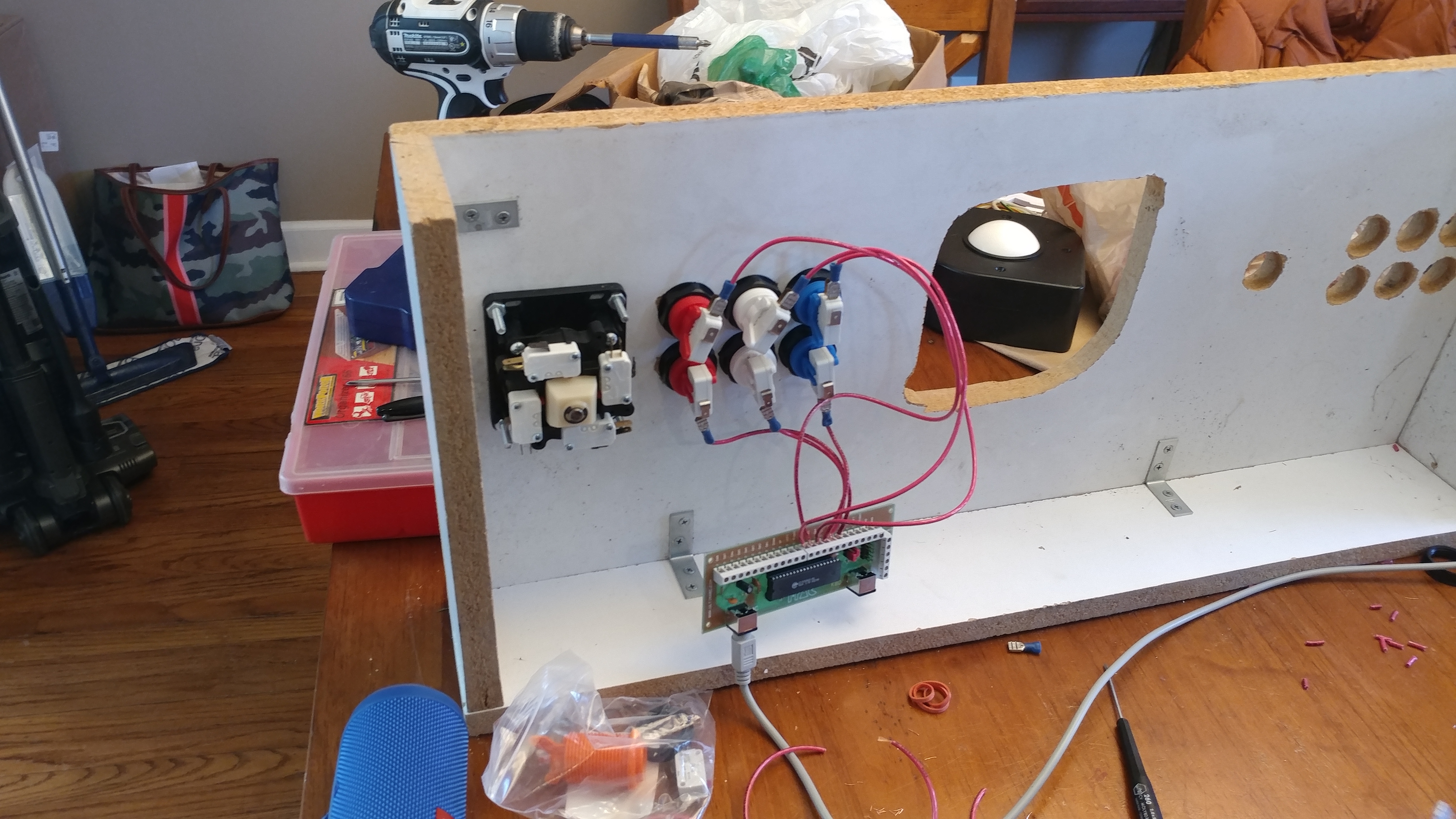 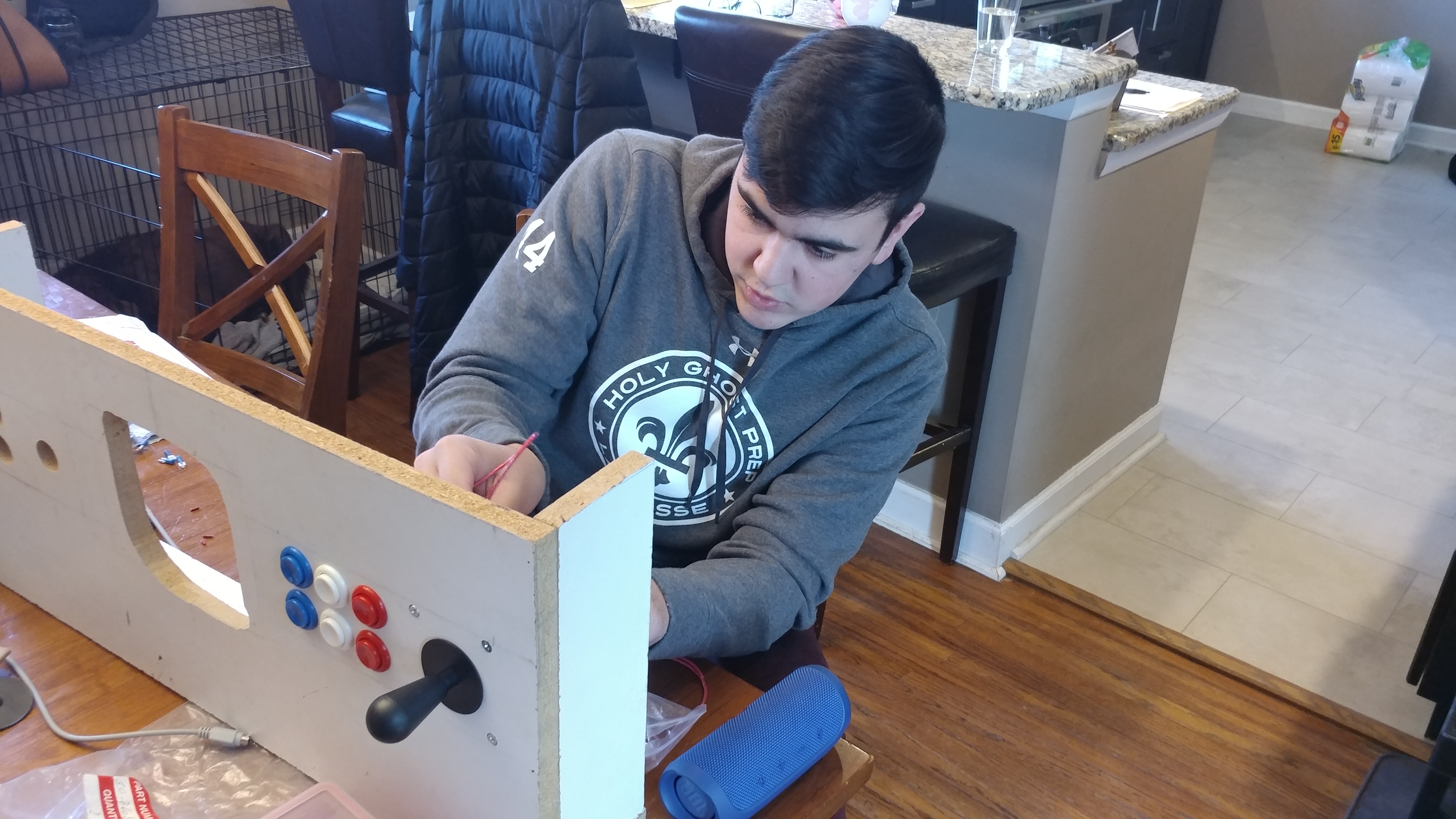 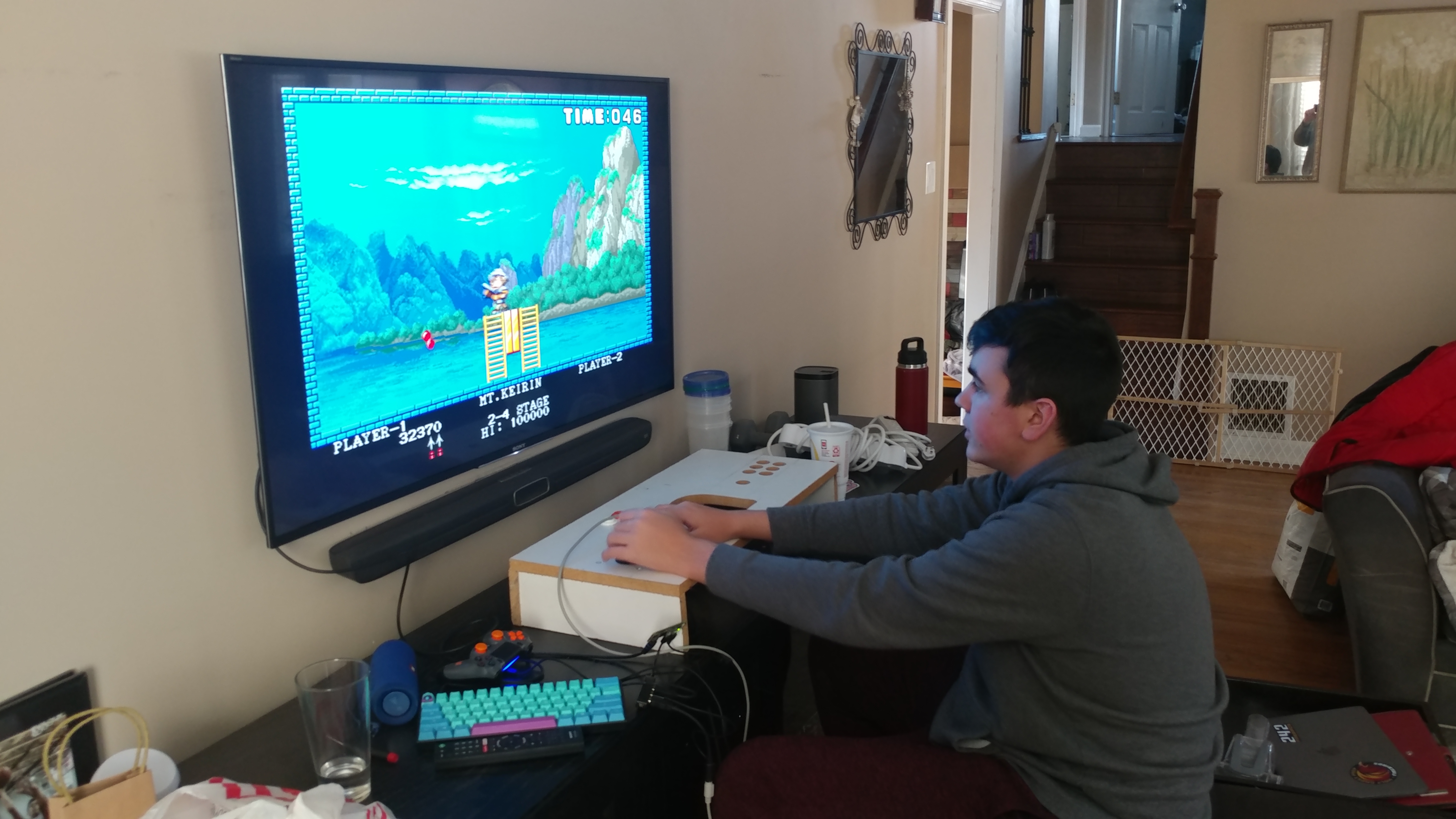 Nice will check it out. The keyboard emulator probably doesn’t introduce too much delay to be noticeable does it? Hows it working?

It’s completely fine. I think it’s actually just a keyboard chip that you wire up the inputs, not really an emulator. The issue is it’s so old, it had a PS2 input. But I was able to get the software for it to program the inputs. If that failed I was going to get one of those zero delay USB encoders as they’re really cheap. Thankfully everything worked (all the parts were ordered forever ago but I never got around to messing with it).

If you sit that close to the TV you’ll go blind!

Great job so far! I have a RasbPi4 that I intended to use for my ham radio stuff but bought a used rugged laptop for it instead. Maybe I should put it to use as an arcade emulator.

@Grex and @Lala_Calamari I expect regular detailed updates of each of your progress or I will withhold my check for the GRG dues!

If you sit that close to the TV you’ll go blind!

He’s a 16 year old boy trapped in the house away from girls. He’s probably going blind on his own.

As for the controls, it’s just a mock test made up of wood I had left over. I printed out a “Street Fighter” layout. Also, the center hole is for a Trackball. I bought all the parts like 10 years ago with the thought of making a cabinet. Life got in the way of that project. Now that things have stopped we have the time. The kid bought a Pi and wanted to mess around with it. Cool thing is, the buttons and joysticks are actual Arcade sticks. In fact the sticks are the same as what the Mortal Kombat machines shipped with.

That said, I was trying to talk him into something simpler. Just a basic box for one player. Buy a cheap $10 project box. Something like this.

Trying to decide on some vinyl and paint designs that I want to do. Also waiting on some mount screws for the monitor.

https://www.gameongrafix.com/ Not sure on the cost.

nice, had not seen that site.

I was looking at some this guys desgins but he is based in the UK so it would take forever to get to me.

You searched for: Megacade! Discover the unique items that Megacade creates. At Etsy, we pride ourselves on our global community of sellers. Each Etsy seller helps contribute to a global marketplace of creative goods. By supporting Megacade, you’re...

Little update. Got the cabinet painted, cut out the plexi for the marquee and started wiring her up. Still waiting on the vinyl to come in.

What’s the amp for? I’m not really familiar with Raspberry Pies, can they not power the speakers? Also, what size monitor?

Yeah the Pi cant power the speakers. It just has a line out. The montor is a 23".

My Vinyls finally came in and I was able to put some time into it. Got the control panel wired up and installed. Going to try and finish her up tonight.

My multicade project is done. Got some minor touchups to do but she is ready to start pew pewing.