Does anyone have any info on this game?

The only things I’ve found have not made it out to be any better than Farming Simulator. In fact, it’s probably not as good as it doesn’t appear to have tree harvesting.

If this game has smarter workers though, I’ll probably jump ship.

Agreed. I was looking at this game as well and couldn’t find any info. The screenshots don’t make it look very pretty, but if the workers aren’t taters I would consider it.

Here’s some stuff chronologically. I’ve just been ignoring it, didn’t know there was any interest.

Another mean machine is under the spotlight for Pure Farming 2018. This time around it’s the Grégoire brand with the magnificent Grégoire G9. Based in the Cognac region of France, the guys at Grégoire mean business and can certain handle theirs when it comes to harvesting grapes.

In this new video, take a behind-the-scenes look at the real-life Grégoire factory as well as some in-game footage of the G9 itself in action:

Pure Farming 2018 is on the way in March to try and bring some competition to the Farming Simulator franchise. Before the game itself is out, Polish developer Ice Flames has started a video series that is set to provide us with the facts of farming in Pure Farming 2018.

This first video highlights an important aspect in the game: fuel management. You’ll have to make sure you’re topped up if you want to do pretty much anything with all that majestic machinery.

In a new video for the upcoming grow-em-up Pure Farming 2018, we learn about the international farming options in the new title.

Agriculture goes global as the player can manage farms across multiple countries, including Japan and Italy.

In the third instalment of Pure Farming Facts from developer Ice Flames’ video series that covers different features of Pure Farming 2018, the team takes to the skies with a bird’s eye view thanks to the handy drone.

The drone will provide players with important information including details on the fields, greenhouses, animal sheds, and plenty more. See it in action in the following video:

@xxxNAILBUNNYxxx Found the answer to workers. 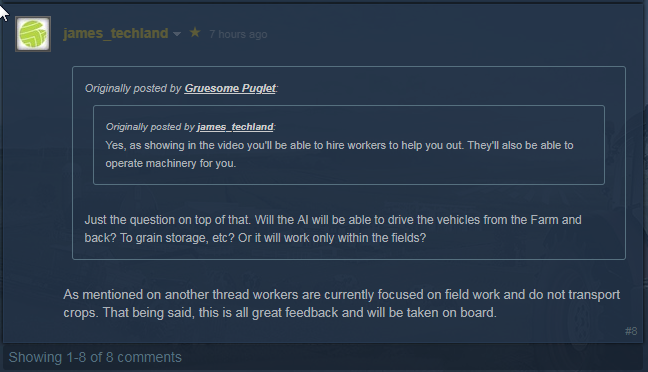 On the plus side, they have a few other features that FS17 doesn’t have.