Black Ops Cold War has only been out for a couple of weeks, but Treyarch are already working on new content for players to enjoy, with a new game mode named “Dropkick” leaked ahead of launch.

As with previous CoD games, its developer is shaping up to support the FPS giant with a year’s worth of content to maintain its fanbase. BOCW is no different as Season One is looming ever-closer, meaning new additions are near.

One such change seems to be a new mode called Dropkick. Very much playing on the game’s nuclear influences, the mode has been hinted at in BOCW itself.

The information has leaked through the game’s actual in-game loading screens. As players impatiently endure the pre-game setup and test out their itchy trigger-finger, the game describes what Treyarch‘s new mode is all about.

The first leaked line reads as follows: “If you die while your team is holding the objective, you won’t respawn until the carrier is eliminated.” So it could be a case of being a longer-form game mode, but similar to Headquarters in that you’ve got to try and have the team be successful, otherwise you sit things out and wait your turn.

The other line that’s been revealed is: “Gain access to launch codes while holding the objective in Dropkick to deploy a powerful nuke and declare victory.”

This evidence would suggest that it’s something similar to Sabotage in that it’s a continuous mode – unlike Search & Destroy – and requires a degree of teamwork to succeed.

When will it be available?

As of writing, there’s no specific hint as to when we’ll be able to get stuck into Dropkick. As we said, Season One’s start date is approaching, and it wouldn’t be a surprise to see lots of new maps and modes announced before it starts.

It does also beg the question, what other nuclear-related items will we see in the game? Given that the game’s theme is based around the extreme threat of nuclear threat in the ’80s, we already have Fireteam that features nukes, now Dropkick could add to that.

Is it possible we’ll see the Nuke killstreak added at some point to really shake up the game? Only time will tell.

A combination of leaks and in-game teasers have revealed what we might see in Cold War Zombies’ first DLC.

Fans are expecting new Zombies content in December but it’s likely we won’t see a new Zombies map in Season 1 of Cold War, as the roadmap only teased ‘New Modes’ for Zombies rather than a new map.

Leaks have revealed that the next map will be set in Vietnam and called Firebase Z.

YouTube channel TheGamingRevolution put together all of the leaks and in-game teasers to make a prediction on what the next Zombies map will be.

Early leaks for Cold War Zombies revealed that the game would launch with Die Maschine and a Vietnam map called Firebase Z. Firebase Z never actually arrived at launch, so it’s likely it’ll be the next Zombies map added to the game.

A document was found in the game files that further teased a Vietnam setting. This Russian report teases players will be taken to the Khe Sanh area of Vietnam.

Popular leaker Tom Henderson, aka Long Sensation, said that we probably won’t see a new map until February at the earliest. The screens Weaver is looking at in the intro cinematic to Zombies shows several locations – Vietnam, Russia, and Berlin.

In-line with the leaks, a marker points towards the real-life Khe Sanh Combat Base in South Vietnam. We visited this location the mission S.O.G in the original Black Ops, which included a detailed layout of the area which could be used as the groundwork for a new Zombies map.

The campaign mission ‘Operation Fractured Jaw’ includes another real-world location, Firebase Ripcord. While we can see almost the whole base from the air, players didn’t get the chance to explore the base on foot. 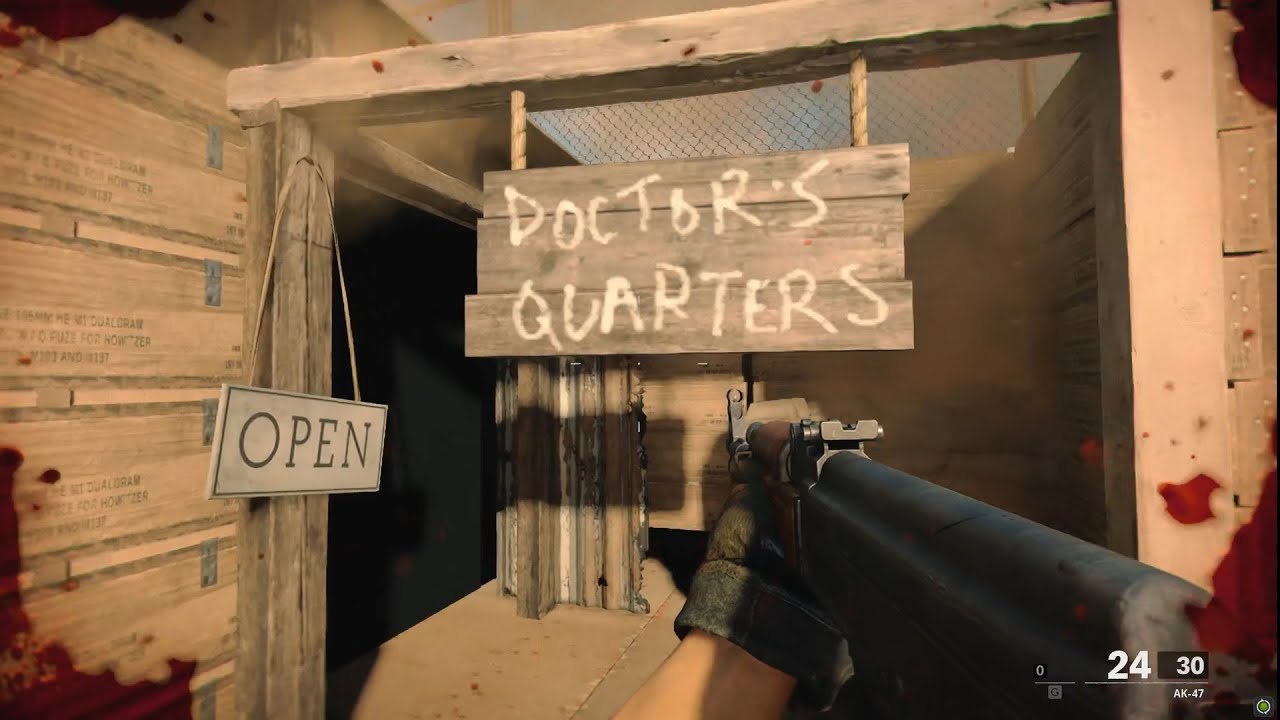 However, a player uploaded a video of them glitching out of the mission and exploring the area. The textures are low quality, but they found an interesting nod to Zombies. The sign for the Doctors Quarters is the same model used in Shi No Numa for Richtofen’s quarters.

As players were never meant to see this sign, there’s no apparent reason for it to be included. This could mean they’re gearing this location towards being a Zombies map. Firebase Ripcord could be used as a foundation for a Zombies version of Khe Sanh, or perhaps players can visit both through a portal or the Dark Aether.

TheGamingRevolution has a theory on a potential boss fight for Firebase Z. While in the Dark Aether on Die Maschine, you can see ghostly apparitions of monkeys. These monkeys are similar to the Zombie Monkeys on Shangri-La, so could be making a return in the jungles of Vietnam.

Graffiti on Die Maschine also teases a potential boss. There is a painting of a Gorilla wearing a helmet that looks similar to those worn by the Viet Cong. On the outside of the bunker, there is also a painting of the Cosmic Silverback boss from Dead Ops Arcade. These two images combined could be teasing another Gorilla-like boss for Firebase Z.

Also while completing an Easter Egg in Die Maschine, players can encounter a large monster made out of trees which players believe to be an Elder God. It’s possible that this creature could return as a boss, similar to the tree monster in CoD Mobile’s Shi No Numa.