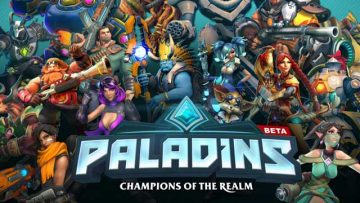 Grex will running a lobby on the Paladins Beta on XB1 tonight 5/4 starting at 9pm EST. The beta is open to all and if you are a fan of Overwatch this should be a no-brainer!

After 50 days of the closed beta being available, Hi-Rez Studios is making its first-person shooter Paladins: Champions of the Realm open to the public. Paladins counts with 24 Champions and, like free-to-play MOBAs, these can be bought with the real money (either individually or by buying the $20 founder’s pack including all champions), or with the in-game currency earned by completing matches, leveling up champions or by completing quests.

Regardless of how you intend to earn such gold, this weekend, Hi-Rez has a new double gold event running between May 3rd and May 7th to celebrate the newcomers.

In case you’re on the fence, Paladins starts you up with a tutorial with Viktor, that basically is the game’s equivalent to any other FPS soldier’s mechanics, making your transition smooth and making the game seem easier to dominate.

Played a little this afternoon was fun.

Good games @Grex @anon47610769 @RebelxHeart @EnyoBellona @bigtrees86. Hopefully everyone got to 5 so we can play some matchmaking.

Sorry for the abrupt departure. My controller batteries were 100% dead for that last game.

Finally completed the download late last night ( with an update ? ) and ended up playing until 2 AM . I like this game !!! It is like Overwatch but better in a lot of ways .

I really think a lot of GRG will enjoy this game. It’s a blast to play. Being free to play really helps but I expect a bunch to pony up the 20 to unlock all the character once they play a few rounds.

All players in the group must have at least 12 champions at level 4 mastery.

All players in the group must have at least 12 champions at level 4 mastery.

Play Casual MP. Not competitive. You only need to be level 5 (overall level) to get access to casual MP.

Played a few rounds with @anon36214017 tonight. We got curb stomped. I’m not sure wtf the deal was but we kept drawing the tard team. We’re getting the Paladin noobs while facing pros. It was bad.

We need to get some GRG together and steam roll some pubs.

Pro-Tip: Learn Ying and Bomb King. Those 2 can be evil in the right hands.

Sure, it was the other players’ fault.

You would have to turn on your Xbox to understand, gunny… I mean Jammer.