What’s your go to Hero in Overwatch? And why? If you have a few, let us know who they are and what role you use them in.

My current go to is the big fat ass, Road Hog. While he is classified as a “tank”, I see him as a beefy DPS. That shotty hits HARD. Sure it doesn’t have much range, but that’s what the Hook and Chain are for. That’s a great tool as it not only brings them up close for a blast from the shotgun, it also stuns them. Once you hook someone, they’re pretty much dead. Even better is it can yank Bastion out of his turret mode.

He may not have a shield mechanic but his heal is so OP right now. Every 8 seconds you can restore the majority of your health.

I feel this is a character that plays well both offensively and defensively. He thrives at being in the forefront of the battle. If you’re not pushing with Road Hog, you’re playing him wrong.

Ran into him ALOT in the beta.

Few good counters, the turret guy has a shotgun, I was chained a few times and shotty to the face of roadhog before he shot took care of that.

Another counter is dvas bot. If you time it right he’ll bring the time bomb to him.

I love playing healers and I like all of them. I find Mercy hard to play with in a random group. She depends on the other player to protect her as she don’t have much way to defend herself. She excels at single target healing, if you combine her with a good health tank like Winston and Roadhog they can help push the team forward. Also if everybody is healed she could switch to a gun but I think using her staff to increase a members DPS is better so she can quickly get back to healing. Her Ultimate is nice since she can revive downed members on the field.

Lucio is another big fave of mine. Getting members quickly caught up in the battle is helpful a lot in this game, so his speed boost is really important.

I usually start with AOE sprint and once in the midst of battle change it to AOE healing. So anybody that is close to me they slowly regen health. It isn’t much but when he uses a boost ability it increases the heal for a few seconds. Will usually pick him for attack style gameplay.

Unlike Mercy Lucio is a little more offensive. His weapon sends out wave projectiles that are great for blasting randoms shots with. You are not going to make high damage or precision shots but this will make where mobile targets have to avoid your shots and help force enemies behind cover.

I think Lucio works well with tank Reinhardt. His sprint boost will help Reinhardt go faster while his shield is out and Lucio can his blast towards enemies through the shield. Helping push the team through the map.

His Ultimate is a small shield that he gives to all allies that are close radius to him, try to make sure you use it with good number of members during an aggressive time, shield don’t last long.

Defensively mostly I play Symmetra, another great support. Her Photon Projector is most likely one of the hardest guns to use in the game. RT is a short range beam that slowly does more damage over time. LT charges when held in and when released releases a projectile (which can be powerful against stationary targets.)

Her Ultimate is a Teleporter that can be used well for offense or defense to quickly get the team where they need to be. As I said with Lucio getting members quickly together as possible is important in the game.

Always make sure to put shields on allies, the ability is always active if group member don’t have shield.

What I like about her most are her little sentries. These annoying little bastards are weak but not only damage enemies but it slows their speeds as well. Lot of enemies don’t notice them fast enough, by time they do the damage been done. I try to put them close to corners so they are hard to see when walking into an area. You can have up to six so try having close to defense area and if portal is up put two close to portal to defend it.
Also ideal to try have them somewhat close to each other that they hit the same target but from different angles.

I’m probably best with soldier 76 I like his versatility having sprint, heal, and rockets.

Roadhog and Bastion have been the only ones Ive spent much time with, Im not sure I could handle the faster characters, slow and plodding is more my jam.

I am just running the cowboy for now.

I played for about an hour at lunch with Mercy… didnt get a single kill, but got a couple MVP awards … very fun character to play, totally different dynamic

It's Time To Stop Being Salty About Bastion In Overwatch

For months now, some Overwatch players have insisted that one hero is too strong, perhaps even overpowered. Now that the game is officially out and the hero balance is more or less set, however, I hope we can all agree that the bellyaching is all...

Can bastion be countered? Of course. Is it fair for him to get 4 kills in 3 seconds before everyone realizes where he is? No. Dps turret is ridiculous

Then people need to learn how to play and stop feeding a stationary character.

Can bastion be countered? Of course. Is it fair for him to get 4 kills in 3 seconds before everyone realizes where he is? No. Dps turret is ridiculous

The trade off is he can’t move and doesn’t put out much damage while moving.

I know as roadhog I can use my chain to pull him out of turret mode. Also Gengi (Ninja) can use his deflection. There are many ways.

My go to’s right now are Lucio and Reaper. Lucio is a nice aggressive healer. Using his speed ability is legit to get your team back in the battle if there are a few deaths at one time. I like his passive healing as well, not having to focus on one person to heal and I get to blast sound waves at people is pretty fun. As @AmuseKus said farther up, Lucio coupled with a Reinhart is a pretty dangerous duo.

Reaper is just fun to run around and shoot people in the face with. Finding little corners or nooks to hide in and take the opposing team from behind(heh) is pretty satisfying. He’s pretty straight forward to play but finding the best spots for him to thrive makes you feel awsome when you get a double or triple kill.

Took a break from Road Head tonight and started playing Reaper a lot. I really like this as a full DPS character. You really want to flank the enemies with this character. Get in behind them and wreak havoc. The wraith form and teleport are key to making that happen. Learn how to teleport properly and this class is brutal. Use Wraith to get past heavy shit (bastion firing) or as an escape when in serious doo doo.

Then his ultimate is pure bad ass. Death Blossom just wrecks fools. Use the teleport or wraith form, get in the middle of an assload and unleash your ultimate = Play of the game. 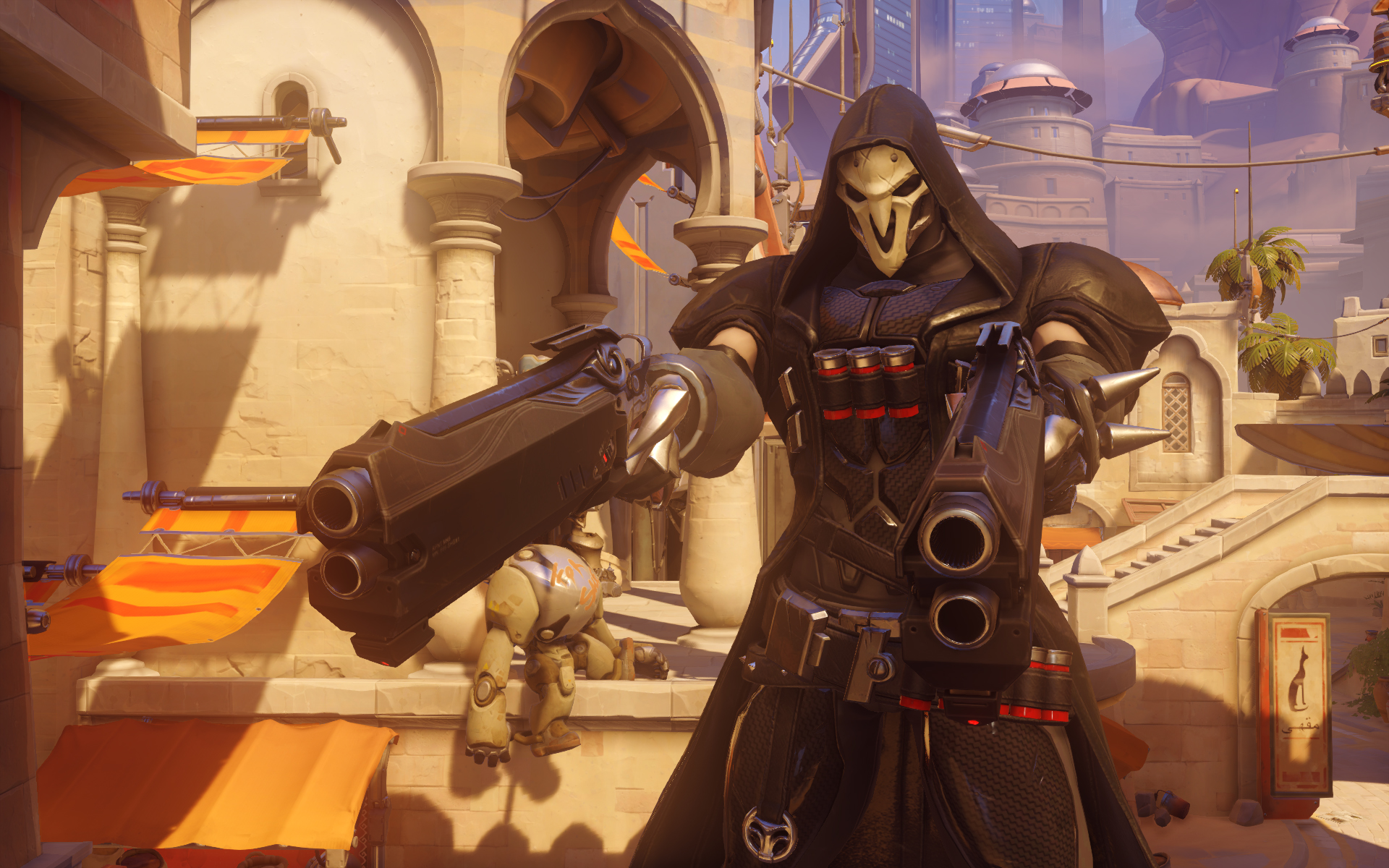 Here’s a really good breakdown of all the characters. It gives their strengths, weakness, who they pair up well with and who can counter them.

I actually turned out liking Winston tonight. He doesn’t do tons of damage but he is great at being a pain in the ass. One strategy I used was picking out weak players. I would see them, use my Leap ability to get on them, use my shield to stop their teammates from hitting me, use my weapon to fry them, then try to rush back to my teammates.

Since his weapons can hit multiple targets, it with the help of teammates can be used to push enemies back.

His shield can also be used similar just to stop bullets from flying at teammates.

I started to get comfortable with Zarya last night. When escorting the payload I would get on it and launch grenades nonstop trying to get some hits on people. She can shield herself and one other player so I try to keep that going. Haven’t made much use of her ult yet though. Still though fuck reaper, it’s probably why LaLa uses him because he sucks and needs the OP.

You really have to tough a few games out when you try a new character. I think they all are balanced well. They may not be useful in some roles and you’ll still need a decent team composition. You always need a Healer ( and a good one). D.Va may suck for you at first but that will change once you get the mechanics down.

Too late, I’m genuinely hurt. I tried my best to secure wins for team. Jammer was right about you.

Playing Winston yesterday I totally disagree, the difference between his Ult compared to others is it’s not completely made to kill people. (Overall Winston doesn’t do tons of damage, he is pure Tank). If you could auto kill with Primal Rage as it is right now It would be OP.

His Ult has two purposes. 1st pure choas by knocking back enemies everywhere, disorantating them and pushing them out of control points.

2nd purpose it’s completely fills his health and while active he has bonus health.

Last night I got back on and did Weekly Brawl Arcade for a few rounds as Winston. The other team had a Winston as well, we were a bane in each other’s exsistance and both of us were very hard to kill.