This year, BioWare is celebrating N7 Day by adding new javelin skins to Anthem that are themed after a Turian, Krogan, Quarian, and Asari.

It’s officially N7 Day–an annual Mass Effect fan holiday celebrating the beloved RPG franchise every November 7–and BioWare is marking the occasion with the help of its most recent game, Anthem. The studio has released new javelin skins that are themed after characters from the original trilogy of Mass Effect games. A new emote and wrap have been added to the game as well. All of this is available now in Anthem on PS4, Xbox One, and PC.

Honestly, the four new javelin skins might be the coolest additions ever implemented into Anthem. The Ranger now has a Turian skin that reshapes the javelin to look like Garrus from Mass Effect 3. The new Storm skin is Asari-themed, making the javelin look like Liara in her default Mass Effect 3 appearance. Neither of the other two skins are based on specific characters, with the new Colossus skin themed after a Krogan and the new Interceptor after a Quarian. All four new skins are pictured below.

Each skin goes for 61,000 Coins or 850 Shards, which roughly translates to $8 USD. There’s a new Mass Effect-themed emote in Anthem’s in-game store too: the Shepard Shuffle. Unlocking the emote allows your javelin to perform the awkward dance of the Mass Effect trilogy’s main character, a long-running joke in the franchise. There’s also a new Mass Effect: Andromeda-themed wrap available for purchase to adjust the Mass Effect skins to look like the armor worn by the Turians, Krogans, Turians, and Asari in the Andromeda Initiative. The javelin skins, emote, and wrap will remain in Anthem’s in-game store until November 12.

BioWare typically does or announces something Mass Effect-related every N7 Day, and it’s looking like these new Anthem cosmetics may be the key part of what the developer planned for this year. Now that it’s November 7, we’ll report back if the studio has anything else to share.

GameSpot is joined by GiantWaffle as we play through the opening hours of Infamous: Second Son (Sucker Punch/SIE) using Playstation Now!

Though this isn’t a typical celebration for the people of Bastion, we wanted to show our love for the day with four Mass Effect-themed armours and more. 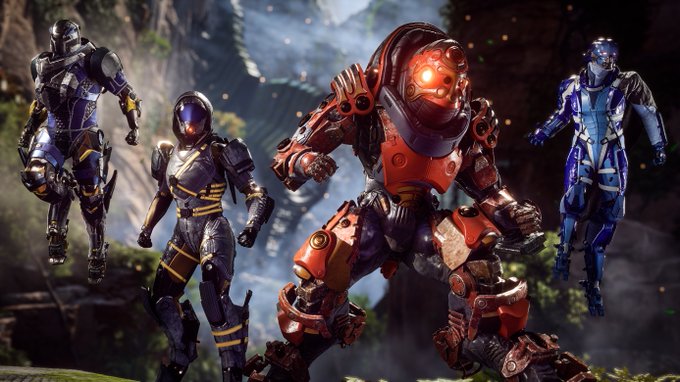 150 people are talking about this

Today we’re celebrating #N7Day with a series of short videos featuring members of the team.

We want to hear what you love about the Mass Effect universe and what you want to see in the future, so join the discussion by using the #N7Day hashtag.

936 people are talking about this

During N7 Day 2018, BioWare posted a short video on Twitter where studio boss Casey Hudson teased a new Mass Effect game by knowingly staring at the camera after saying, “It means coming into the studio every day, dreaming about what the next great Mass Effect game will be.” In February 2019, Anthem and Dragon Age executive producer Mark Darrah said that BioWare is “definitely not done with Mass Effect.”

In EA’s latest quarterly earnings call, COO Blake Jorgensen said that the company wants to “deliver some exciting remasters of fan favorites, including the Command and Conquer game we’ve already disclosed.” However, he did not confirm whether those “exciting remasters” might include the Mass Effect trilogy.

With the current player base, I suppose they’ll be able to buy a pizza and maybe a 2L of Pepsi with the proceeds from the sales.

Based on the amount of staff that keeps leaving that might be enough to feed them all.
Honestly surprised they are still supporting this game.