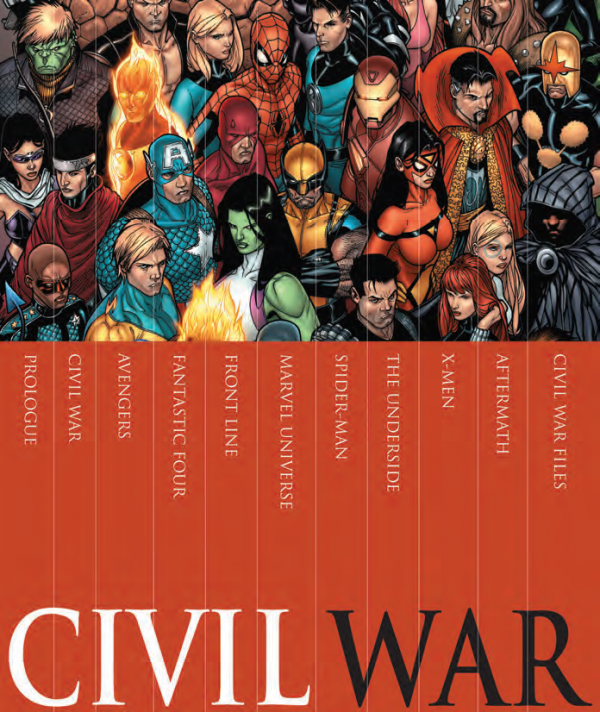 This is something i would love to buy, but no way im paying that much… I have all 5 Hardcovers of Punishers War Journal, 3 are still in plastic.

Fansided reports that the box set, coming just in time for the Captain America: Civil War movie, will retail for $500. That money will get you a total of 11 hardcover volumes, spanning 100 issues of comics in which superheroes punch each other.

The Civil War story arc centered on a rift between Marvel’s iconic superheroes, over the Superhero Registration Act. Following a tragic accident involving amateur superheroes, the government pushed for an act that would force masked vigilantes to register their real identities, causing a split between those who fought for privacy, led by Captain America, and those who felt an obligation to obey the law to make civilians feel safe, led by Iron Man.

The third Captain America movie will adapt the comic storyline, and an Easter egg in Ant-Man even hinted at a rift building between Cap and Tony Stark. Spider-Man is also going to have a cameo in the Civil War movie thanks to Marvel’s deal with Sony, as his allegiance played a big role in the comic storyline.

One of these days I’ll read these books. I know the Civil War comics are on the google drive but I’m not sure the order in which to read them.

read then in teh order they are numbered on the drive. Also one them is the checklist which has the order as well.

that price is retarted. would be a sweet set to have, maybe when it comes down in price comes down.