IGN just posted a story on a leaked 3 page plot outline for GoT. Originally it was supposed to be a Trilogy. While a lot of details in the outline are different than the actual story / show, the story is still about the same.

Quoting the text for reference;

Though Martin pitches the books as a trilogy (HA!) there are some bits that are unchanged in the published versions. For example, Ned Stark dies in almost the exact same manner, discovering the truth about Jon Arryn’s murder and then being sentenced to death by Joffrey. The biggest difference here is he manages to send Arya and Catelyn Stark out of King’s Landing beforehand.

This death then causes war to break out between the Starks and the Lannisters, though Robb was originally planned to fight Joffrey on the battlefield, with the spoiled young lion facing Robb without fear but ending up maimed. Sansa, meanwhile, would have married Joffrey and born him a son and heir. Eventually, she would have had to make a choice between her Stark family and her husband and would end up coming down on the side of the Lannisters, before coming to bitterly regret this later.

In more family disagreements, Tyrion would have removed Joffrey from the throne after being horrified by his actions. Jaime then proceeds to kill anyone with a great claim to the throne than him, including Tywin, before taking the crown himself and blaming all the crimes on Tyrion. The Imp is exiled and decides to ally himself with the Starks, which is where things get really interesting.

Having left King’s Landing before Ned’s death, Catelyn and Arya flee north, picking up Bran on the way and seeking refuge with the Night’s Watch, where Jon is. While here, Arya and Jon fall in love with each other but refuse to act on it because of the whole incest thing along with his Night’s Watch vow of celibacy. Interestingly, Martin says the situation changes once Jon’s true parentage is revealed, adding fuel to the fire of another popular fan theory about who they may be. Tyrion also falls in love with Arya, thus creating a love triangle in which Jon and Tyrion loathe each other. Arya doesn’t reciprocate The Imp’s feelings, however.

Unfortunately, the Night’s Watch aren’t really allowed to help their family out, so Cat, Arya and Bran are forced to flee further North beyond the Wall. They end up encountering Mance Rayder and Cat meets her death at the hands of one of the Others (the White Walkers from the TV show). Still, Jon manages to become commander of the Night’s Watch. So that’s nice.

The final plot point involves Daenerys, who not only invades Westeros a lot sooner, but does so after killing her husband Khal Drogo out of revenge for the death of her brother Viserys.

The final paragraph of the letter is blacked out, so we don’t know exactly how it was all supposed to or still could end. Having said that, Martin identifies five characters who would survive: Daenerys, Arya, Jon, Bran and Tyrion. Does this still hold true? We’ll have to wait and see.

Pics of the pages.

So it still seems Jon, Tyrion and Daenerys are related. They’ll ride the 3 dragons to reclaim Westeros. Interesting to see Jaime take over the Throne and kill his father.

Too bad we won’t find out WTF happens anytime soon. Winds of Winter isn’t going to be published this year.

What’s the theory behind Tyrion being related to Jon and Daenerys? I don’t think I’ve heard that one

Hmm interesting. I’ve never heard of this theory. I don’t think I buy it though just based off of Jamie’s conversation with his Aunt when they were trying to get Brynden Tully when he is holding out. You just never know though with these books though.

Shit, I just want the next book. Too bad one won’t be published this year.

Or ever for that matter…

I don’t care about the books…not enough pictures for me, too many words. But, I’m just glad you guys got me to watch this shit. I finished season 4 on Tuesday, and now wish I took it slower.

I read all the books. They’re stupid long. 1000 pages of complete bullshit that could be wrapped up in 300-500 pages. I’m not a fan of the books but I love the show.

Funny thing is, the show really does a good job following the books. I guess it’s easier to stomach GoT in hour long segments while they’re loaded with tits.

The HBO adaptation of George R.R. Martin’s Game of Thrones has run out of George R.R. Martin books to adapt. Season 5, due to premiere April 12, will tie up Martin’s A Dance With Dragons, the last book available in the series. And without another book coming in the near future, the series creators have to go ahead and make Season 6 without the roadmap they’ve used for so long.Of course, Game of Thrones showrunner David Benioff and screenwriter D. B. Weiss know how Martin’s story ends, and have begun to write to his blueprints. But for the first time, the immediate future is completely unknown. To the Game of Thrones cast, this could either be a terrifying prospect or a liberating one - here’s what Alfie Allen (Theon Greyjoy), Sophie Turner (Sansa Stark), Liam Cunningham (Davos Seaworth), Carice van Houten (Melisandre) and Nathalie Emmanuel (Missandei) had to say on the matter.

Spoilers for Game of Thrones Seasons 1 - 4 ahead.

Allen’s Theon has had a rough time of it recently; most of us now know him as Reek, Ramsay Snow’s mutilated plaything. But Theon’s chronology has followed a markedly different path in the TV series than it did in the books.“For me – specifically my character – with the torture stuff that happened in the third series”, explains Allen. “In the books, it’s only really spoken of about twice [in the early books] – Theon’s in the dungeons getting tortured” – that’s it. And so then that torture take place in book five. So they had to move it forward to season 3. So my storyline really is one where nobody knows where it’s going to go.”
“I’m feeling excited and terrified. It’s a bit of both. Definitely. I try to get it out of David and Dan where it’s going to head, but they’re extremely tight-lipped… it’s more exciting than terrifying…but
definitely a bit of both.” 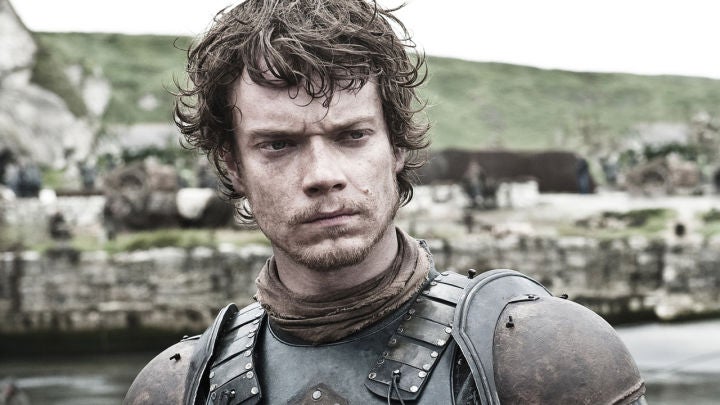 van Houten and Cunningham, interviewed together as the devil and angel on Stannis’ shoulder, are thrilled at the prospect of being unshackled - because neither have read the books. “I will get around to them,” laughs Cunningham. “But everything’s [always] been new to us.”“It’s nice to know that now everyone is on the same page”, says van Houten. "Nobody knows anymore. Like before in the make-up trailer, people would know a little bit more than we did… there were people who knew where it was going. Now everyone is on the same page."Cunningham stresses that the Martin/Benioff/Weiss trio are the only gatekeepers of Game of Thrones, and that’s how it’s going to remain.“There’s only three people who knows how it ends. The middle of last year, the two boys, Dan and David, they spent a week with George in his home in Santa Fe, who rolled out the end of the story for them. So they know what’s going to happen.”

Emmanuel is excited to be moving away from preconceived notions of how the narrative should play out.“Everyone has their opinions on the show because of the books”, she says, "and now we’re walking into a season where nobody knows what’s going to happen. I think it’s exciting. I’m really excited to find out what’s going to come of Missandei and Daenerys."She could be on the winning team, I tell her.“Well, we do have three dragons and a pretty kickass leader…so we’re doing ok. We’re going to be ok.” 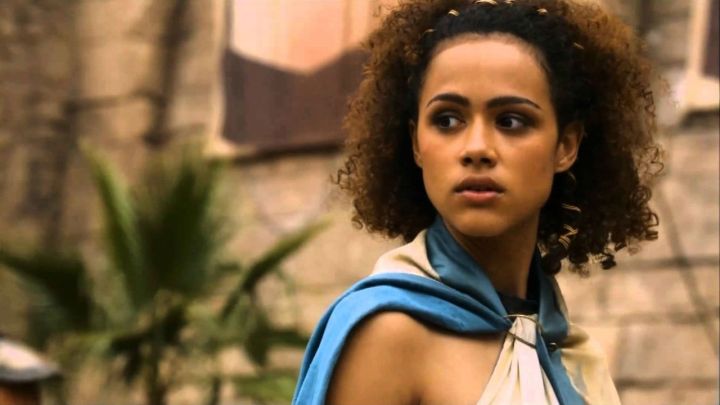 Sophie Turner explains that even with Season 5 under her belt, she still has no idea what’s going to happen to Sansa in Season 6, calling her fate “the most ambiguous thing ever”.

Warning - vague spoiler for Sansa in Season 5 ahead.

“Um…it’s really exciting…I think”, says Turner. “Especially because, for Sansa, as book fans will know, it’s kind of come to an end for her [storyline] in the books, so we don’t know what’s going to be in the next book for Sansa, but this season’s (Season 6) going to happen before then. So none of us have any idea. And judging by the end of how season 5 ends, I think it’s going to be the most ambigious thing ever what happens to her”. 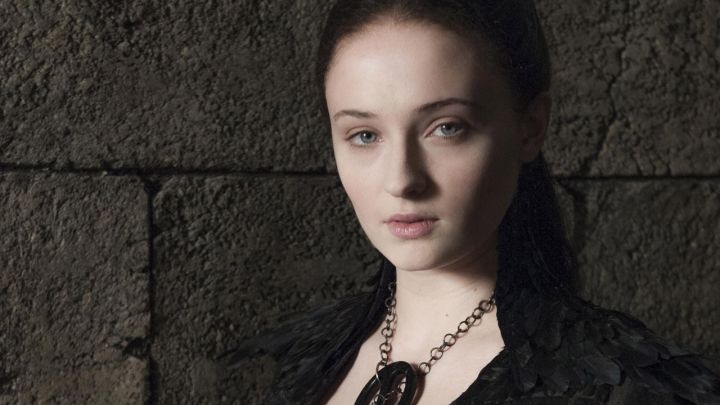 Game of Thrones Season 4 is out now in Australia, USA and UK on DVD and Blu-ray. Season 5 will premiere April 12.

And Aria is gonna grow up to be a super badass assassin?

I would of taken that Lord Stark offer. But Jon has values. Whatever.

I forget what happens with Lady Brienne now that she’s no longer looking for the Stark girls. Same with Jaime and Bronn. I’m not sure if their story is caught up with the books and if they’re moving forward? I do know this season will end past the current books.

Yes he does. I’d not have passed it up.

Brienne is a stalker now I guess. Still gonna follow even though both turned down the offer. Wtf?

Jon Snow is an idiot. I would have done unspeakable things to Melisandre.

No shit, he is an idiot. For not tagging that and not taking the Stark name. Fuck that wall.

Interesting episode this week. There is a lot of original content that’s not in the books. For instance, the whole Jaime & Bronn Brofest is new.

IGN does a cool article after each episode where they talk about the differences with the show and books. Most are so minor, others are vastly different. Omitting major characters or just new scense.

Well, at this point, unless they want to have a several year hiatus while GRRM takes his time writing the books, they need to diverge. Get an outline from GRRM on the story arc and how they want it to end, and write from there.

And to be honest, I don’t mind that. I like when The Walking Dead strays from or modifies comic story lines, because it gives me twice the content to enjoy (at least when I get around to reading the GoT books, that is).

I don’t mind either and I think that’s the route they’re going . They already said this season will pass the books.

And most already know my position on the books, the books were ok. The show is so much better. GRRM is a wordy fucker and most of those books could easily loose half their pages and we’d never notice.

At this point, I’m not sure why he’s not cranking them out. It’s shitty Fantasy, not some literature masterpiece.

Omg what a great epi tonight! So much win!

That last 15 minutes was epic.