One month after being announced, Turn 10 has decided that Forza Motorsport 7 should have a weekly series where the 700 cars included in the game should be revealed. This event is called Forza Garage. Although likely we won’t have such a long list announced in the upcoming weeks, announcing 160 cars is surely a big way to open the event.

Nice to see all the Porsche love.

I love all the high-end cars…but i do miss the days where you had to start out in the every day beaters. I would actually like to see more on that side of the spectrum as well.

Thinking back to the Gran Turismo days.

B class civic races were awesome in turismo!

I actually think B class races are the most fun. Probably because more people can control those cars.

Nice to see all the Porsche love.

B class civic races were awesome in turismo!

I actually think B class races are the most fun. Probably because more people can control those cars.

I agree. At most A Class. Especially for us Taters. I remember learning to play Forza and racing with the 2o4forza guys. I painted my Boss Mustang in John Deere colors as I spent more time on the grass than the track.

I’m looking forward to the return of some Sunday Night Racing. I think it’ll be a bit better racing on tracks that we can properly learn. FH3 was great but I won’t miss the “randomness” of the races. I will miss the rally cars and dirt but that’s about it.

You never tried out project cars, did ya?

Last week, Turn 10 Studios revealed the first 160 cars from the 700+ expected in the latest installment of the Forza franchise, Forza Motorsport 7. The developer has now followed up with the next set of cars, revealing another impressive list, this time focusing on some classic and vintage models.

Among the cars on the list are the 1953 Chevrolet Corvette, the 1950 Alfa Romeo 158 — who doesn’t love the early Alfas — and the 1967 Volkswagen Karmann Ghia. Whilst some fans might be familiar with the models, Turn 10 Studios has provided a little background to these particular models.

1950 Alfa Romeo 158
Alfa Romeo has been building race cars since 1913. In fact, they started racing just after the company was founded. It wasn’t long after they found victory, and they went on to compete in nearly every form of motorsport with great success. The 158, or the Alfetta for “Little Alfa” as it is commonly known, has earned its way to reverence as one of the most successful race cars ever built, winning an astounding 87 percent of the grand prix races it and its subsequent model – the 159 – competed in. The 1,479 cc supercharged straight 8-cylinder engine in this model produced around 350 hp aboard its lithe tube-frame chassis. The great Juan-Manual Fangio along with Giuseppe Farina took the 158 to win every race but the Indy 500 during its post-war debut season. Fangio would of course go on to win the World Driver’s Championship five times making the 158 a storied piece of motorsport legend.

1967 Volkswagen Karmann Ghia
“The Volkswagen Karmann Ghia is the most economical sports car you can buy… it’s just not the most powerful,” says the announcer in the commercial introducing the Volkswagen Karmann Ghia. Although it’s true enough that it was never a powerful sports car, in the looks department the Karmann Ghia has character and style in spades. Automotive historian Jan Norbye called out its stylistic similarities to the Alfa Romeo 2500 S and the Lancia Aurelia. Those styling cues are no doubt Italian, as the Karmann Ghia was designed by Ghia, a prestigious Italian design firm. Karmann coachworks was under orders to design a sports car to build over the VW chassis. After several of their proposals were rejected, Karmann reached out to Ghia, who delivered a prototype that perfectly hit the mark. The car has seen more than 20 years of production and the only cosmetic changes were larger bumpers and head and taillights.

1953 Chevrolet Corvette
Most legends come from humble beginnings, and the story of the Corvette is no different. In an era where the only true sports cars were built in Europe, Chevy saw an opportunity. The company went about building a dream team to design a car that would appeal to a younger market, give the brand some flash and keep it ahead of Ford in sales. Harley Earl, GM’s then design chief, let fly with an idea he had been coveting for more than a year after watching European sports cars at Watkins Glen: a low to the ground, two-seat roadster. Driven by practicality, the 1953 Corvette uses mostly off-the-shelf components such as the “Blue Flame” 160hp, 235-cubic inch in-line six-cylinder engine and two-speed Powerglide transmission. The only options available were a heater (which cost $91) and an AM radio ($145). All 300 that sold in 1953 had both options. The 1953 Corvette didn’t even have roll-up windows. All the cars were hand-built, and all were Polo White with red interiors. The use of fiberglass was not only a weight-saving innovation but was a necessity due to the Korean War and a limited availability of steel. The 1953 Corvette’s dramatic and bold exterior was just what the public wanted and it forever changed the course of American car history.

Along with these three, there is a new list of cars that will be added to the catalog in the new title. Personally, I’m still missing the iconic 1968 Ford Mustang 390 GT Fastback but who knows, there are still plenty of cars still to be announced. However, there are some genuinely special cars listed including the Shelby Daytona Coupe, the Mercedes Gullwing, the 1939 Auto Union Type D and the early Mini Cooper S.

Forza Motorsport 7 will be launching for the Xbox One and Windows 10 on October 3rd.

Forza Motorsport 7 will launch with 700 cars in the initial version of the game. Yes, 700. We have been getting large doses in the form of weekly updates for the vehicles that will be available at launch. This week we are given a list of 77 Japanese vehicles that will launch with the game. Additionally, we also get a some information on body customization options in the garage.

image.jpg2000×1100 312 KB
For car fans, seeing the letter “R” on a car usually means something special. In the case of the 2016 Honda Civic Type R, “R” means “racing,” as in race-bred. Honda didn’t just slap some logos and some wheels on this specification either. That “R” may as well also stand for “ridiculous” horsepower – as in more than 300hp. Take one look at the sleek and aggressive aero kit and the “R” can easily stand for “radical.” From the torque-steer limiting dual-axis strut suspension, to the mechanical front differential and the Brembo brakes, this Civic Type R is just what Honda fans, and Forza fans, have been waiting for.

image.jpg2000×1100 375 KB
The new 2017 Acura NSX may be a hybrid, but it’s a hybrid supercar – a mid-engine, all-wheel-drive, twin-turbo hybrid slice of pure performance perfection. With around 600 hp from its combined 3.5-liter V6 and three electric motors driving all four wheels, you have a balanced and capable car that can compete with other supercars nearly ten times its price. There are nine gears to work your way through as you pass 60 mph in just over three seconds and torque-vectoring to smooth you through the curves. For decades “NSX” has been synonymous with serious performance; lucky for us, the 2017 NSX more than measures up to its famous name.

In addition to the cars released in this press release, garage customization details were also released.

For the first time in the Forza Motorsport series, we’re bringing wide-body kits to a number of cars in Forza Motorsport 7. A select number of kits are completely bespoke and designed in-house here at Turn 10; from underground-inspired designs to aero-enhanced kits modeled after professional motorsport. In addition, numerous body-kit options from Forza Horizon 3 will also be available in Forza Motorsport 7, including Upgrade Heroes like the Nissan S14 and the 240SX SE announced today.

Wheel options will be abundant in Forza Motorsport 7. In addition to bringing over a number of the new-entry wheels from Forza Horizon 3, we’re adding a selection of new race-inspired. Whether you’re building your favorite car for yourself or you want to establish your reputation as a master in the Forza Motorsport 7 tuning scene by sharing your masterpiece on the Auction House, now you’ll have more options than ever to build the cars of your dreams.

Forza Motorsport 7 is scheduled to launch on October 3rd. 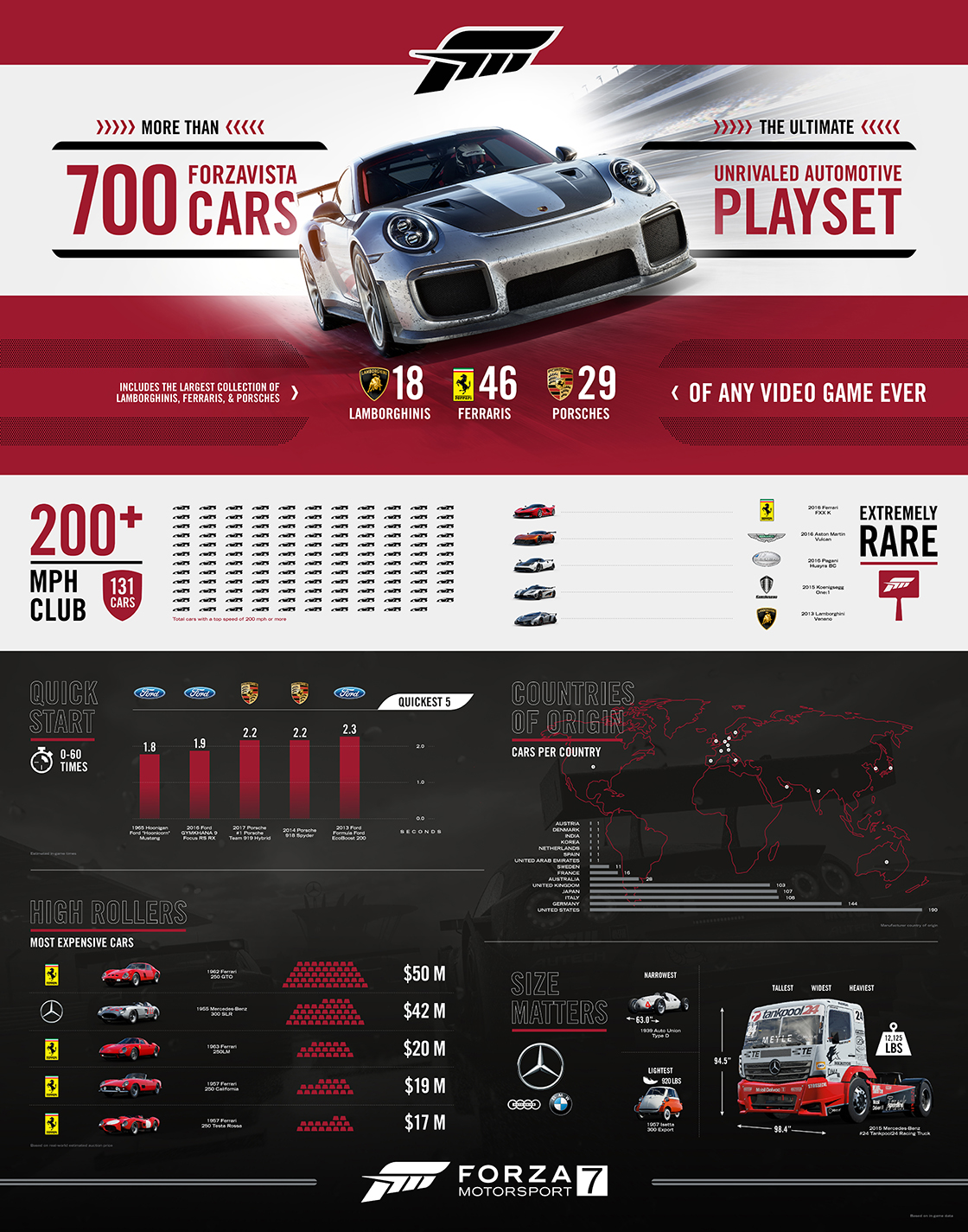