‘Fortnite’ Is Posting Cringe With Its Anti-Apple Tournament, Skin And Merch

‘Fortnite’ Is Posting Cringe With Its Anti-Apple Tournament, Skin And Merch

Epic is hosting a #FreeFortnite Cup, an event on August 23 which offers prizes to players ranging from big ticket items like gaming PCs or consoles to Fortnite’s new “Tart Tycoon” skin, a cutesy jab at Apple, and a “Free Fortnite” hat with a play on... 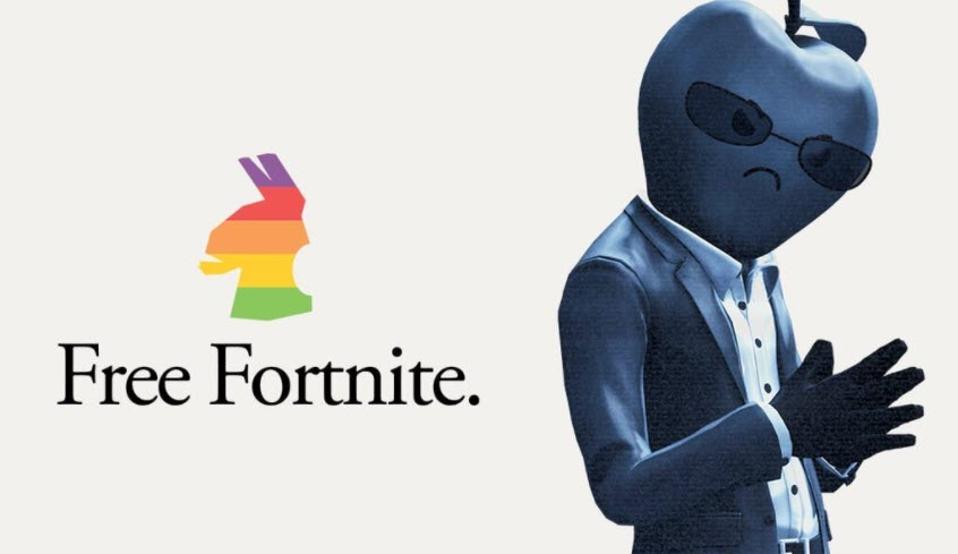 The more I see how Epic planned this whole Apple ban and lawsuit as a kind of front-facing circus, the less I’m on board with it. And it’s now culminating in a spectacle that to me, just comes off as…kind of embarrassing.

That would be the #FreeFortnite Cup, an event on August 23 which offers prizes to players ranging from big ticket items like gaming PCs or consoles to Fortnite’s new “Tart Tycoon” skin, a cutesy jab at Apple, and a “Free Fortnite” hat with a play on Apple’s rainbow logo and “Think Different” font. 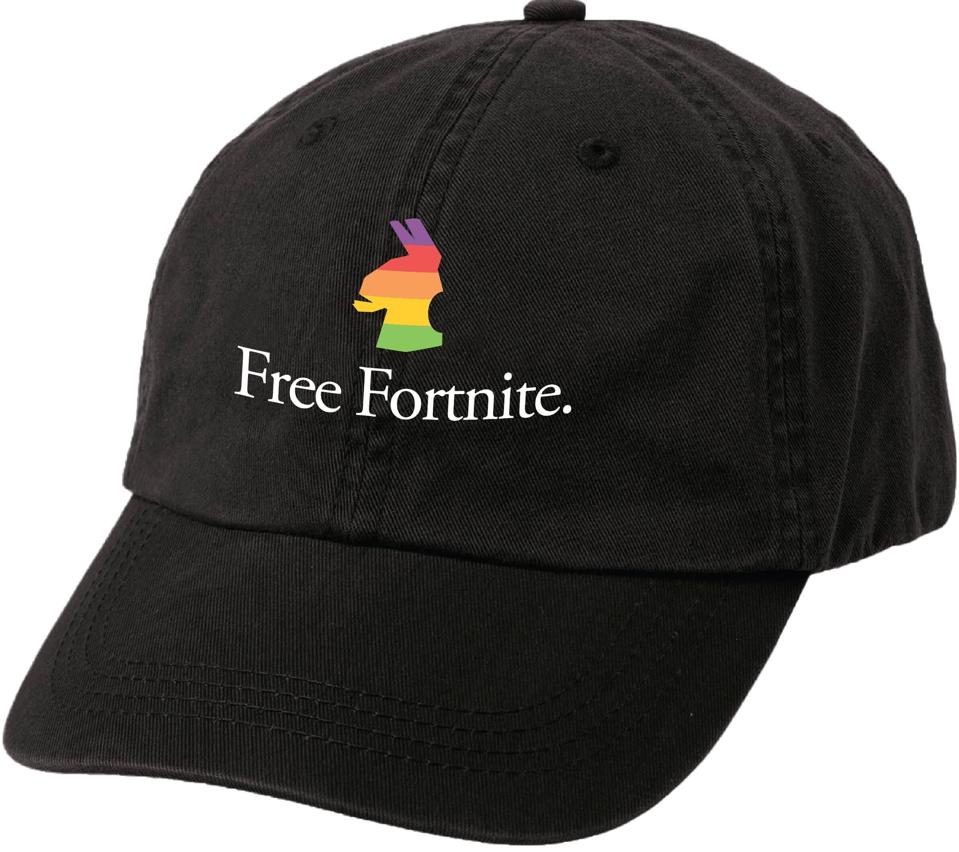 I…kind of just hate all of this, and I don’t understand Epic’s play here.

While I won’t go so far as to say that Epic is “weaponizing children,” since that sounds overly malicious, I genuinely don’t get what Epic wants the end result to be here, and with an event like this and this goofy anti-Apple campaign, it gives the impression they’re not taking this fight all that seriously nor are they prepared for the long road ahead.

Over in the real world, Fortnite’s new season ends in a week and iOS players will not be able to play the new season at all because Fortnite has been banned from the app store for deliberately violating TOS, and the game can no longer be updated. In addition to that, Apple is about to cut off all of Epic’s developer accounts and tools around the same time, which affects not just Fortnite, but potentially every game or app using Epic’s Unreal engine, which cannot be supported by Epic if Apple’s actions happen. Epic already filed their initial lawsuit against Apple for the Fortnite ban, but now they’ve had to emergency petition a court to try and stop Apple’s larger sweeping actions against them, and there’s no word yet how that’s going.

Meanwhile, this public-facing anti-Apple campaign is doing…what, exactly? The idea seems to be that a bunch of kids try to log on to Fortnite on their iPhones at season 4 start and they can’t get the new battle pass so they…complain to their parents? Their parents…call Apple? Complain online? I really don’t understand the call to action here, and all Epic seems to be doing is highlighting the futility of their fight, however correct they may be in pointing out Apple’s monopolistic position.

Epic has indicated the only way that they’ll put Fortnite back on iOS is if Apple agrees to reduce its “greedy” 30% cut of app revenue not just for Fortnite, but for the entire store. While again, yes, that industry standard 30% number is too high and too oppressive and bad, what is the realistic probability of Apple folding to “public pressure” about this? Zero. It’s zero. And the possibility of a court ruling that they must reduce the 30% number? Not zero, perhaps, but if it ever did happen, this case would likely take months or even years to resolve, and it’s something that really doesn’t just include Apple, with that 30% cut being in place across app stores from Google, Steam, Nintendo, Microsoft, Sony and more. 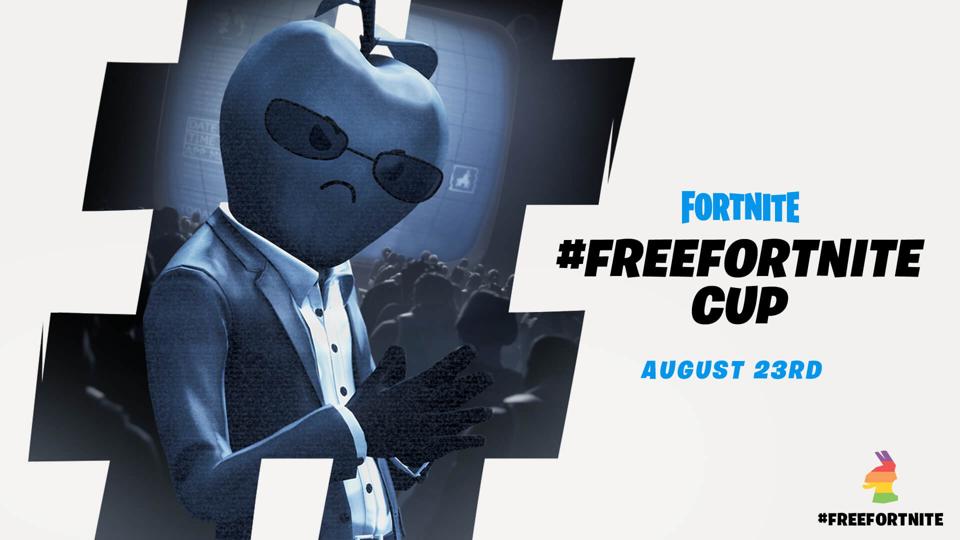 In short, Epic wants to change the entire industry. Yes, that’s a noble goal and I support it. And yet with Epic about to start losing tens of millions a month in mobile revenue and its developers about to lose support on iOS for Unreal, this pre-conceived cutesy anti-Apple tournament and skin and merch rollout seems tone deaf and pointless. It makes this seem like an attention-seeking vanity project rather than an important moment for the industry. If Epic is fighting for all games and apps, why is this campaign #FreeFortnite, at all? It’s broader than that, and yet Epic is not really explaining that or making that clear outside of the text of the lawsuit that no one is going to read.

Even the aesthetics of this bother me, with Epic trying to rally its young playerbase using…an Apple ad parody from 1984 and now a rainbow logo parody last used in 1999. All of this just so…lame.

It sucks because I do fundamentally believe in everything Epic is saying in regard to Apple and this 30% cut there and elsewhere. It stifles creativity and entrepreneurship and these companies have way, way too much power over their closed ecosystems.

But I am really not getting the impression that Epic is prepared for the long haul here, as an event like this implies some sort of fantastical dream that people will complain on social media until Apple agrees to give up tens of billions in revenue by voluntarily reducing its app store cut. Or best case, this has nothing to do with the public at all, and the courts force them too, but who knows how many years away that would be, if it even happens at all.

The way Epic is handling this is rubbing me the wrong way, even if fundamentally, I agree with them. And that’s kind of a problem.

I agree with the article. At first they were challenging a policy that seemed unfair and should have kept it professional. With all the merch and contest it really has become a spectacle and cheapens their stance.

you are caught up

Im’ right there with you at first i was with the 30% too much issue and now i’m like, i’m not sure i support epic here…my concern is all those “creative types” that develop using unreal engine on macs. I’m fairly sure I read somewhere that within the week unreal will no longer work on mac os w/o support.