Man I really don’t want to get this but every trailer I am like “yup preorder”.

That damn story could have some serious potential. I wonder if releasing close to RDR will hurt it?

I always end up buying the FC games and enjoying them very much. I’ll get FC5!

Primal didn’t interest me at all. I like the gun play in Far Cry games so I’ll probably be picking this one up.

Far Cry 5 is a new adventure set in the woods of Montana. It’s about a small town officer who’s up against a religious cult. Today’s photos show off the game, from the characters you’ll meet along the way to a few set pieces and props you’ll no doubt use throughout the game.

As with almost all big Ubisoft AAA games, there are mutliple collector’s editions on offer for those who want a little bit of memorabilia with their game. You can see what’s included in the screenshots below:

Finally, the PlayStation team sat down with the lead designer for Far Cry 5 to play through and talk about the game. There’s plenty of gameplay shown and we even get to see a baseball bat painted with an American flag, which seems so typically American.

Far Cry 5 is coming to Xbox One on February 27th.

Far Cry 5 is undoubtedly one of the biggest announcements of recent months, and Ubisoft have been releasing plenty of material to keep everyone’s interest up. The latest video shows three different companions you can work with in order to help you to overthrow the Eden’s Gate cult.

Similar to Far Cry 2’s buddy system, players will have the ability to recruit several townspeople to fight alongside. First you have Nick Rye, a cropduster pilot whose switched his plane’s loadout from seed and pesticides to guns and bombs. Grace Armstrong prefers a more subtle approach, taking out enemies with pinpoint accuracy from afar. Finally you have Boomer, man’s best friend — but the cult’s worst enemy.

Far Cry 5 will be released on February 27th.

While the announcement of Far Cry 5’s short delay might mean we have to wait a little bit longer for the game ourselves, there’s plenty of new footage for the upcoming game for people to watch while we all wait. In addition to a new trailer and some gameplay footage from Ubisoft themselves, there’s also a lengthy look at the game’s open world courtesy of PlayStation’s official video team, PlayStation Underground.

We’ll go in order from shortest to longest. That means we start with Ubisoft’s trailer that shows how you can help the resistance and, in turn, how the resistance will help you.

Next up is Ubisoft’s gameplay footage. Coming in at just over four minutes, the gameplay covers liberating outposts, skydiving, and even flaming bears, all with the commentary of Ubisoft’s Mikel Reparaz.

Finally, coming in at 26 minutes on the dot is the footage from PlayStation, which has the folks at PlayStation Underground messing about in the open world of Hope County.

There’s a quest that’s all about eating testicles. Right up GRG’s alley.

Far Cry 5’s Season Pass DLC contents have been announced. I guarantee you won’t have expected it.

Three DLC packs will take players back in time to the Vietnam war, into the future to alien-infested Mars, and across reality to battle zombies. Here’s the official description of each one:

Hours of Darkness: Players will travel back in time to Vietnam to battle against Việt Cộng soldiers
Dead Living Zombies: Players will face hordes of zombies in multiple b-movie scenarios
Lost on Mars: Players will leave Earth behind to go toe-to-claws with Martian arachnids 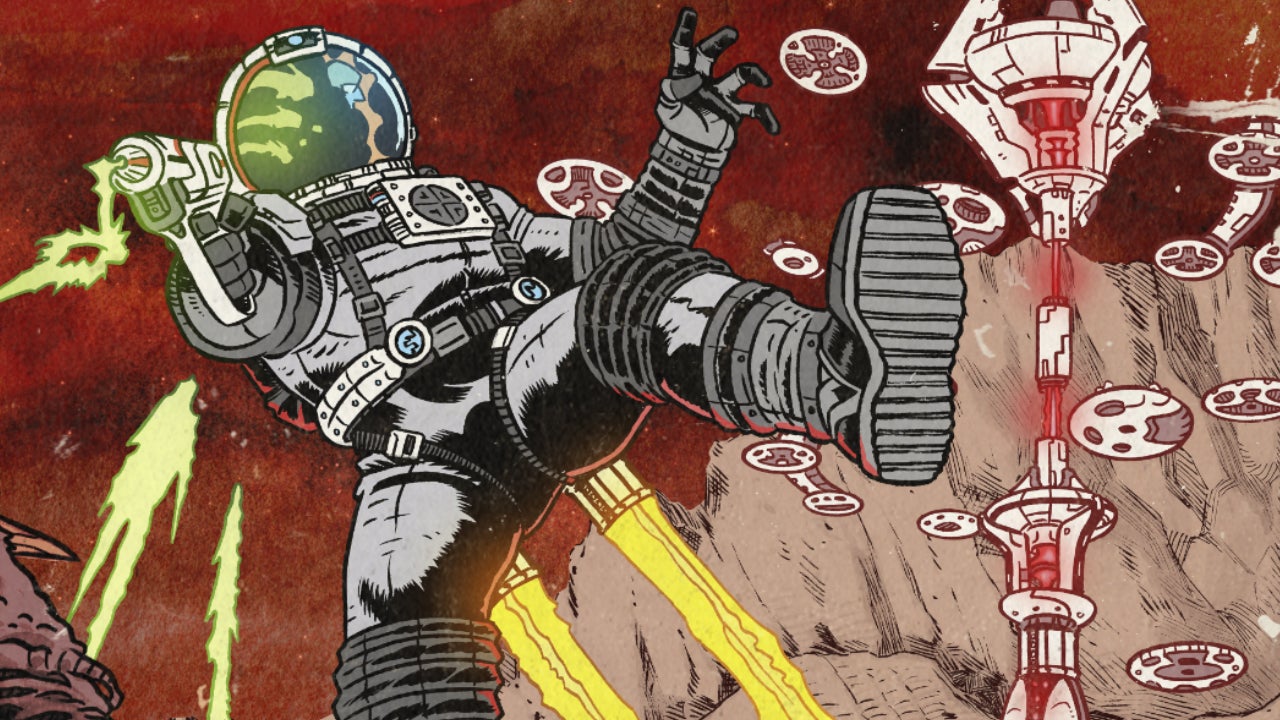 Some unexpected DLC packs, and a whole extra game seems like an OK deal.

What is this Saints Row?

So basically…Far Cry 5 is a fever dream.

There is less than four weeks to go before the delayed Far Cry 5 is in the hands of gamers. With that in mind, Ubisoft decided now would be an appropriate time to explore the relationship between Joseph Seed and Pastor Jerome in their latest live-action trailer.

In the trailer, we see Joseph Seed’s arrival into the parish and his devotion to his faith. Jerome Jeffries is forced to give up his role as Hope County’s Pastor when Joseph forms his cult, Project at Eden’s Gate, and steals his congregation. How did this happen and how did Joseph become the “biggest Far Cry villain ever created”?

You’ll be able to help defeat Joseph when Far Cry 5 is released on March 27th.

Damn. The more they show the more fucked up that storyline seems to be. They have my attention.

Later this month, players will need to join the resistance to take down Hope County’s latest cult and its crazed leader Joseph Seed. As such, the Bill of Rights has been rewritten to fit the situation in Far Cry 5. The may well only be a few tweaks to word order, but they make all the difference and you can see this for yourself in the game’s latest trailer.

If you need any guidance on exercising your rights to their full potential, take a look at the trailer below:

Unfortunately, you’ll have to wait until March 27th for the title to be released on consoles before you can put any of this into practice.

A new collection of Far Cry 5 videos includes gameplay in the Montana mountains and character vignettes of the leaders of the Project at Eden’s Gate cult.

First up is a set of vignettes featuring cultist siblings Joseph, Jacob, John and Faith Seed, giving a terrifying taste of the family values they bring to the Project at Eden’s Gate.

The Mayhem in the Mountains video is a montage of exciting gameplay moments. As you might expect, it includes plenty of explosions and flames against the stunning backdrop of the Whitetail Mountains.

The following Far Cry 5 extended gameplay video from Playstation Underground includes the mission to recruit a bear called Cheeseburger as a Fangs for Hire helper. Cheeseburger is a tank unit who will charge in and cause chaos, leaving you free to pick off targets from a safe distance.

Far Cry 5 will be released on March 27th.

Ubisoft has today revealed their intentions for free post-launch content for Far Cry 5 in addition to the previously announced season pass, which gets a new trailer and screenshots. All players will have access to Far Cry Arcade, as well as a series of live in-game events (that come with unique in-game rewards) once the game launches later this month.

Far Cry Arcade is an “evolution” of the map editor, allowing players to create as many maps and bite-size gameplay opportunities as they wish. For the first time for the editor, this includes solo, co-op and PvP multiplayer content, and there will be over 9,000 assets from many previous Ubisoft titles, such as Assassin’s Creed IV: Black Flag, Assassin’s Creed Unity, Watch_Dogs, Far Cry 4, Far Cry Primal, and Far Cry 5, of course. Ubisoft will have a game-to-web platform where the content that is created will be curated. Here you can follow specific map makers and add a favourite tag to maps. Not only will this extend the life of the game, the mode will reward players with in-game money and points that can be used in the Far Cry 5 campaign to buy customisation options and perks.

As mentioned in the trailer above, the team is planning six post-release updates that will each add more assets for players to use in the editor. Some of these updates will accompany the season pass DLC, adding assets from those campaigns. Each update will also include maps that the development team has created themselves; you can take a look at some of those creations in the screenshots below, but we can’t guarantee that you’ll actually get to play these at a later date.

Speaking of that season pass, the pass will include three pieces of DLC with adventures far removed from the content of the main game:

Hours of Darkness: Players will travel back in time to Vietnam to battle against Viet Cong soldiers and save their fellow soldiers

Dead Living Zombies: Players will team up with friends to fight waves of zombies across seven different scenarios cooked up by a b-movie director

Lost on Mars: Players will leave Earth behind to go toe-to-claws with martian arachnids to save Earth from an alien invasion

Finally, season pass holders will also get access to Far Cry 3 Classic Edition, which is the single-player content from Far Cry 3. Season pass holders will get four weeks early access with the game before it is released to all as a stand-alone title this summer. You can take a look at all of the above content in the trailer below.

Far Cry 5 with its Far Cry Arcade content will be available from March 27th. The season pass content is yet to receive a release window, but we’ll let you know as soon as it does.

Wasn’t sure if this should go in the Far Cry 5 thread or in its own so here we are.