I know what @Lala_Calamari will be doing today

It’s a big day for The Elder Scrolls Online: Tamriel Unlimited. Today, we can access Gates of Oblivion — the new year-long adventure — as well as the system changes of Update 29, and the Flames of Ambition DLC. It’s going to be a busy time for players on Xbox One and Xbox Series X|S via backwards compatibility. We have plenty to cover, so let’s get into it. 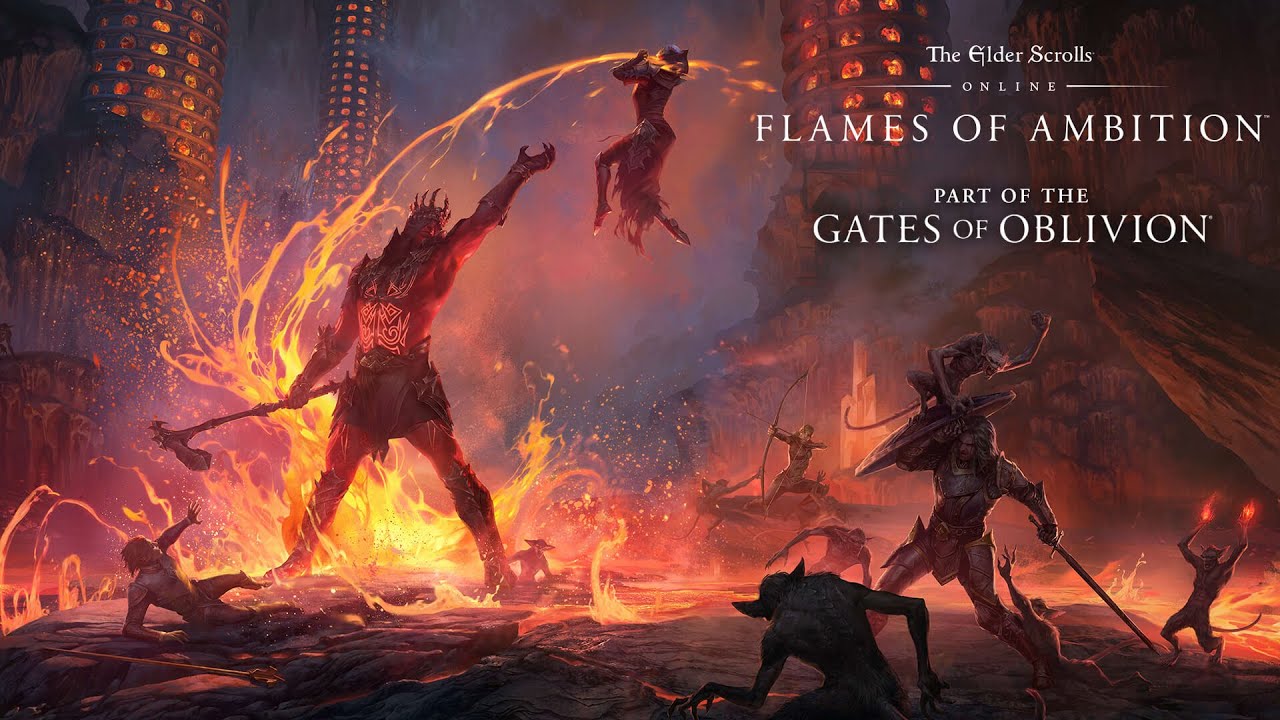 No matter your Alliance, it’s time to join together to save Tamriel from a new threat, as the Prince of Destruction schemes to bring the forces of Oblivion down upon us all. Announced on The Elder Scrolls Online official site, The Gates of Oblivion year-long adventure begins today, with the story being told throughout 2021 with each new update. The Flames of Ambition DLC starts the year off, giving us the opportunity to explore Black Drake Villa on the Gold Coast and the Cauldron in Deshaan. These dungeons bring new item sets, collectables, outfit styles/dyes, in-game achievements/titles, and furnishings for your home. When first entering either of the dungeons, you will receive the Fire-Forged Maul outfit style, plus there are two new Xbox achievements associated with completing the Normal and Veteran variants of the dungeons.

Black Drake Villa sees us reconnect with Evili Sharp-Arrow to search the villa’s archives, as we race against the mercenaries of the True-Sworn that want to set it aflame. Players that enjoy searching out secrets may uncover new pathways and puzzles. For the first time in a dungeon, players can now have a hard mode for each of the three bosses. If, of course, you feel that you can handle that kind of challenge.

Alternatively, travel to the Cauldron where we will battle Daedric beasts and cultists in an attempt to save enslaved townsfolk from the cult of the Waking Flame. With the help of the Dremora Lyranth, travel into the forgotten mine and put a stop to the cult’s plan. 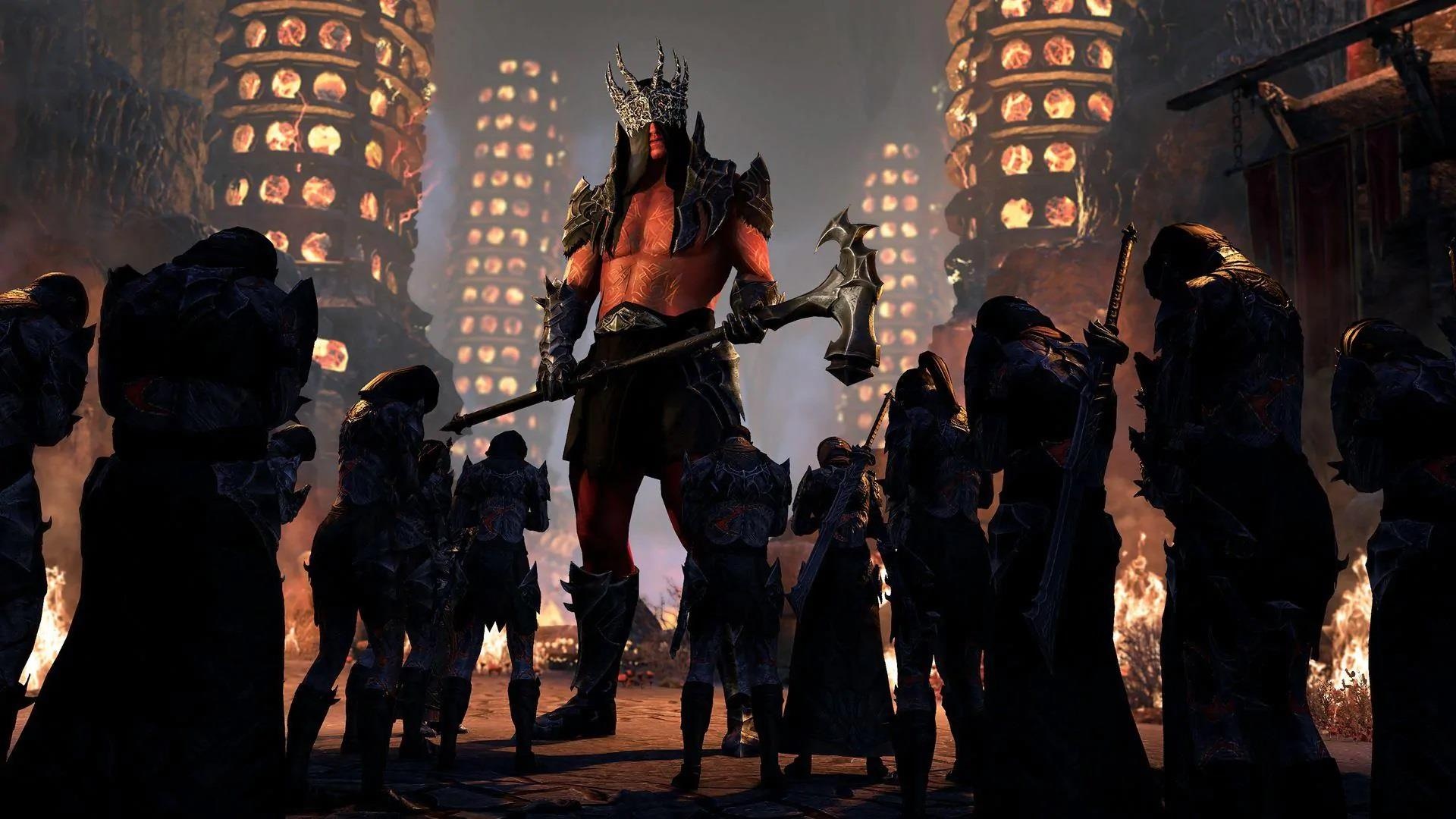 The Flames of Ambition DLC pack is part of the ESO Plus membership, or it can be purchased from the Crown Store in-game for 1,500 Crowns. A Collector’s Bundle can also be purchased for 4,000 Crowns and contains access to the DLC, five Crown Experience Scrolls, the Falinesti’s Faithful Totem Elk mount, and the Clearspring Striped Fawn Pet. 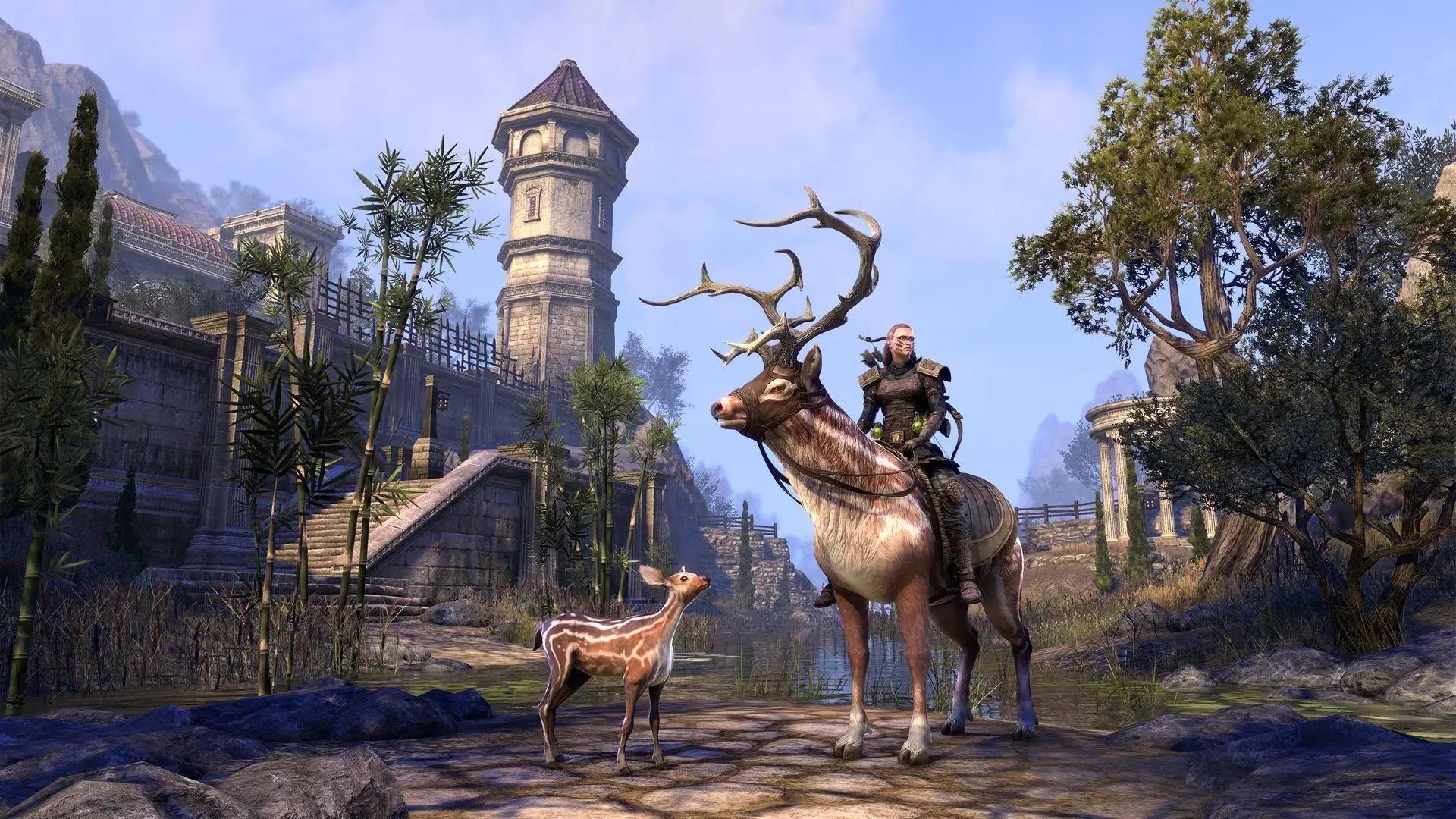 Alongside the Flames of Ambition DLC pack, we also have access to Update 29. There are a few big changes coming within this update, most notable of which are the new Champion Point system and Advanced Stats UI which allows you to view additional combat stats on your Character Sheet. Please note that Update 29 does reset all of your skills and Champion Points to account for the new changes, so get ready for an evening rebuilding your character before attempting any form of adventure.

The Champion System has had a full redesign, allowing for better customisation options and builds. You will now have access to three broader constellation trees — Warfare, Fitness, and Craft — instead of the original nine, in the hopes of better reflecting ESO’s gameplay and providing more options for creative builds. There is now a champion bar for each of the three constellations, which can be used to slot up to four passive boons for each of the trees. This is definitely one of the biggest changes coming to the game, giving us more flexibility in build choice. Though the number of constellation trees has decreased, the number of available stars to spend points on has increased. 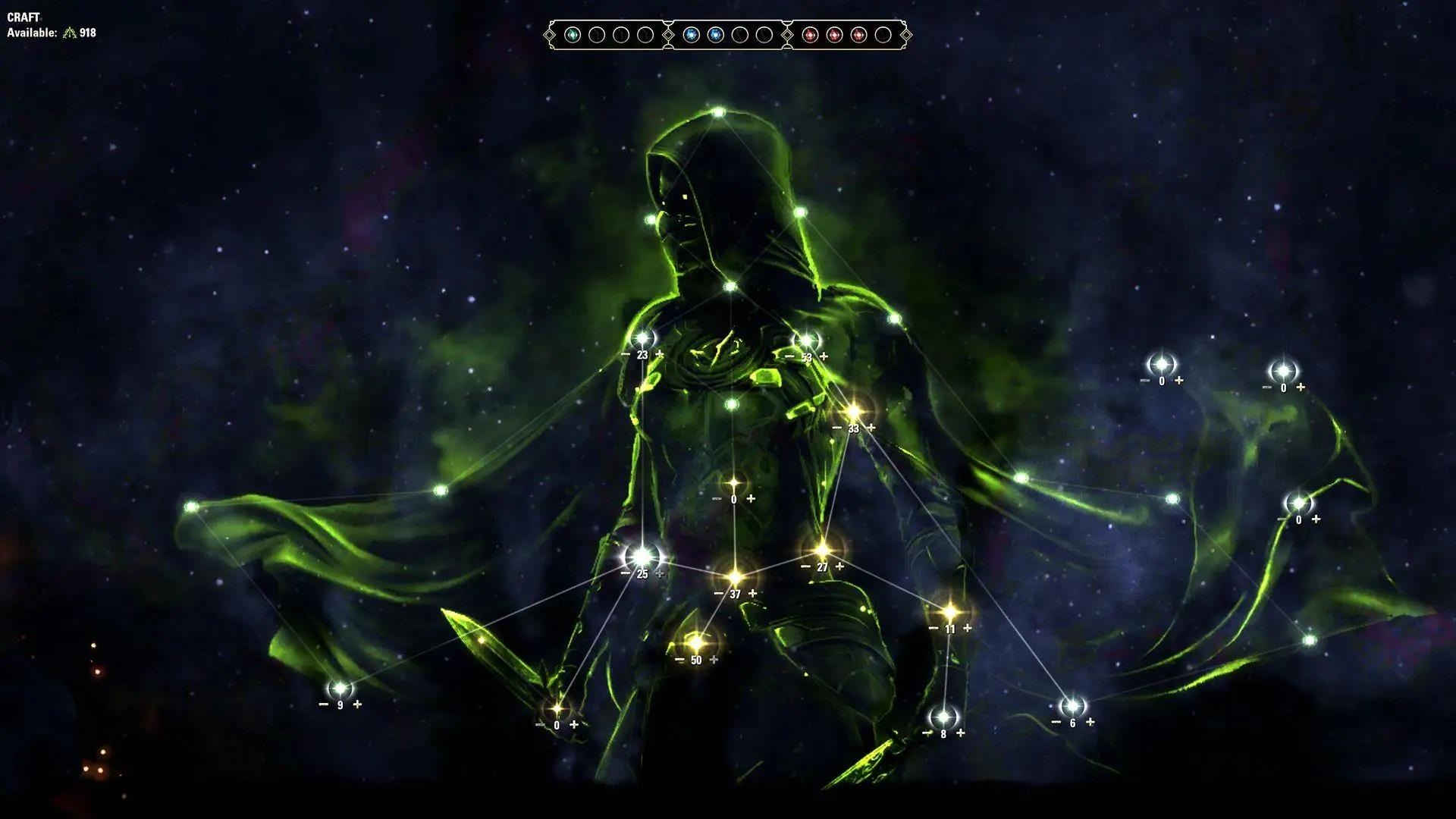 You will also see that the Character Sheet has also had an overhaul, now including advanced statistics for your character’s combat prowess. It is no secret that the Character Sheet has been in need of a rework for quite some time, allowing only basic viewing of your stats. Now, we will be able to see exactly what our Champion Points, attributes, abilities, and gear are changing.

We will update this article once we have the full patch notes for Xbox Series X|S and Xbox One after Update 29 goes live later today.

All of the new content is the beginning of the Gates of Oblivion year-long adventure, readying us all for the Blackwood Chapter on June 8th. Situated between Cyrodiil and the Argonian homeland, the region of Blackwood is suffering from Daedric evils and would-be tyrants. We will be able to access the Imperial town of Leyawiin, the wetlands of Blackwood Bog, and the Niben Forest as we investigate a conspiracy involving Longhouse Emperors and a pact involving the Prince of Destruction, Mehrunes Dagon. 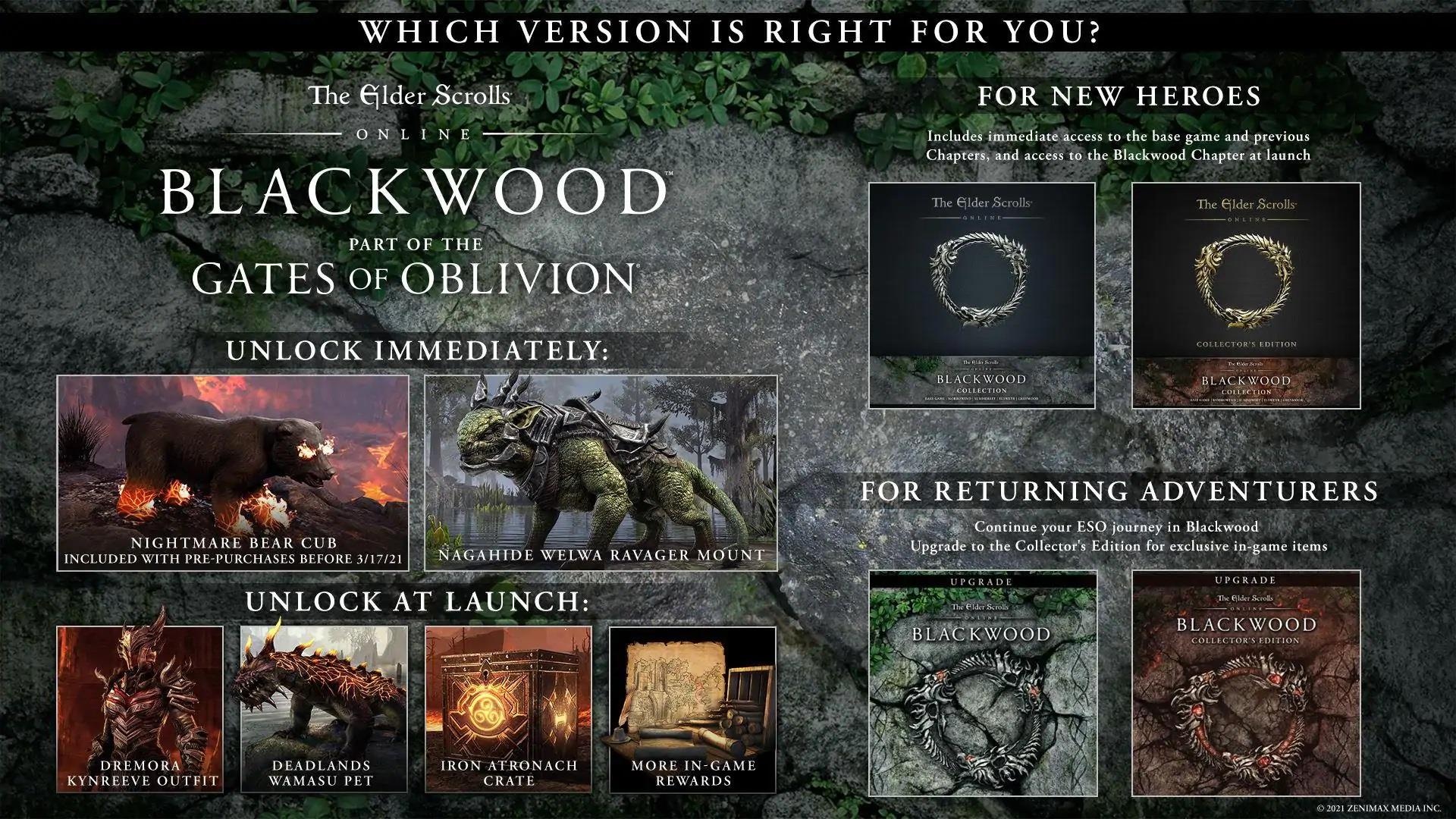 Already downloading it. And also have the gear I need for my PvP build. Just need to respec my skills.