'Tis the season for publishers to reveal exactly how they did over the last financial year. We’ve already seen Disney Interactive record a loss thanks to the disappointing performance of Disney Infinity. Now it’s the turn of Electronic Arts to reveal their plans for the upcoming months.

The good news is that they did better than Disney Interactive. In the words of Andrew Wilson, EA’s CEO, the last year was a “phenomenal year” for EA as they achieved record earnings and exceeded their expectations for the year. Some of the highlights across all of their platforms included the success of their Star Wars titles, such as Star Wars Battlefront, and nearly 54 million unique players across their console EA SPORTS titles, an increase of 65% from the previous year. With that success behind them, here’s what we can anticipate over the upcoming months.

The first major title will be the release of Mirror’s Edge Catalyst, releasing on June 7th in North America and June 9th in Europe. Over the period of July to September, we’ll see three of the newest instalments in long-running sports franchises: FIFA 17, Madden NFL 17 and NHL 17. Titanfall 2 and a Star Wars Battlefront Playstation VR “experience” will launch sometime between October and December, while Battlefield 1 will appear on October 21st. During the resulting earnings call, EA provided a look into why the Battlefield franchise had decided to go back in time away from the current and futuristic war settings that are so popular right now:

When the team set out to deliver the next version of Battlefield, they wanted to do a lot of things with the game. They want it to be the biggest Battlefield game. They want it to be the most diverse Battlefield game. They wanted fundamentally new gameplay mechanics with evolution of story, interwoven character storylines, evolution of machinery, evolution of weaponry… a real opportunity to build and grow inside of a Battlefield universe. When they took a step back and asked themselves what would be the best place to set a game that had that kind of ambition, World War One was really the only place to do it. What very few people remember from their history classes is that people rode in to World War One on horses and came out in planes, tanks and submarines. We think that level of innovation and evolution of battle in a short period of time gives us a tremendous opportunity to deliver a very epic and full-scaled experience. I think what we’ve shown so far is a small taste of that. 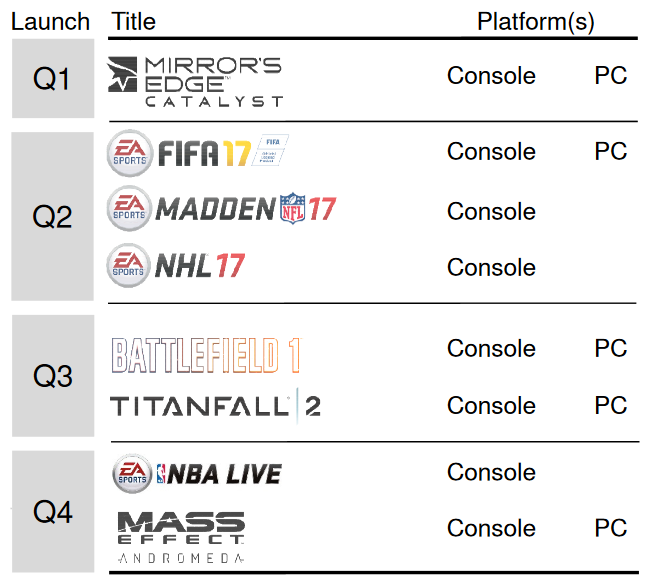 Looking further ahead with the Star Wars licence, EA is looking to be able to provide “at least one” Star Wars title every year for the next 3-4 years. Next year, the Star Wars Battlefront franchise will return, although we’re lacking details as to whether this will be a new game or further content for the current game. Future Battlefront content will include “bigger and better worlds” as there will be new movies with new material to use. In 2018, there will be a new Star Wars action game that is being worked on with Visceral and Motive. Don’t forget that there is also a third new title that is being developed by Respawn too. The upcoming titles are promised to span a variety of genres, including shooter, action and strategy, although this statement does also include the mobile titles that are in development as well.

Finally, during the investment call, EA also stated that they are developing a new currently-unannounced IP that will be arriving next year. Details on this would “probably” be arriving soon, so all bets are on for a reveal at EA’s PLAY event on June 12th.

So does that mean we get a star wars game this year??

I wondered the same thing…