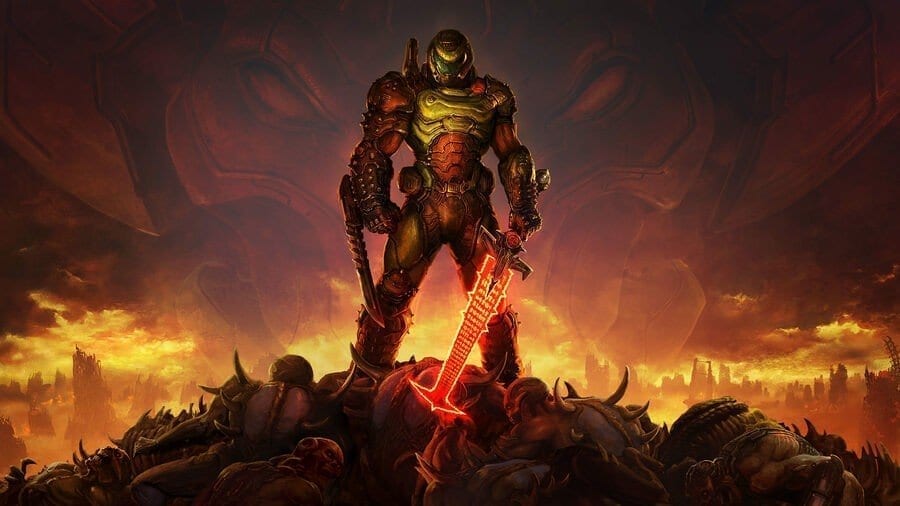 I’m just going to come out and say it. GOY 2020 contender. Doom Eternal takes what Doom (2016) started with and improved it in spades. Every aspect of this game proves why ID is the king of first person shooters in a genre of the same ol same ol games that fail to innovate. From the high speed movement that is buttery smooth, kick ass graphics, head banging soundtrack and a brand new take on multiplayer Doom Eternal is showing how this genre still has ways it can wow the player. This game provides all the tools that allow you to move faster and smarter through each level as you “rip and tear” your way through countless hordes of demons.

““Warning, the Slayer has entered the facility. All mortally challenged personnel please be advised.”

About 15 hours of blood soaked, gut smashed, adrenaline pumping, head banging mayhem. Each level piling on the hellish madness from the previous. Each time you think you have a meta down and think hey, I am starting to get the hang of this. The game throws a wrench in that idea and introduces a new demon that introduces a new mechanic on how to defeat it, always keeping that adrenaline up. But instead of having to toil with it, figuring out how to stun it or kill it, the game jumps in and provides you with the info you need. Showing you a short clip of its weak spots. You start off in your floating castle which acts as a home base. In here you can unlock some weapon enhancements, skill points, skins and admire your metal collection that you collect during the game. You can also set up cheat codes and go back to replay any of the levels for achievements or to collect secret items. All of this will be explained as we dive into each section. The game has more story and some decent lore now on the history of the DOOM Slayer with cutscenes and lore cards.Providing a nice beginning to the fantasy realm of the DOOM universe. 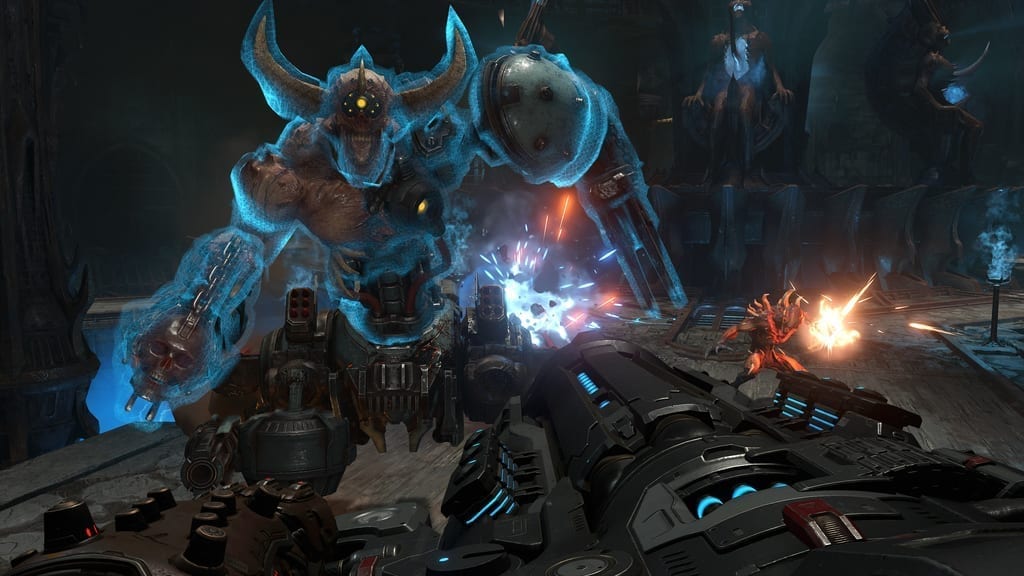 Throughout the game you are given the usual tools of destruction from the combat shotgun, Plasma Rifle, the fan favorite super shotgun, etc.. Oh! And my get out of jail free gun the BFG, when you absolutely need to annihilate every single thing in the room. Most guns are upgradeable and some with two different power firing modes (except for the BFG, cause that would just be excessive /sarcasm). For example the combat shotgun and switch between an auto shotgun or one that fires explosive rounds. Each gun is a blast to use and there is a situation to use them all. Along with gathering weapon power ups there are sentinel batteries to upgrade your armor and runes to improve your skills. But don’t worry about how you spend them as they are pretty easily found and plentiful so by the time you get to the later stages of the game you will already have most of them unlocked.

—The Doomguy, AKA the Doom Slayer

The combat in Doom Eternal is where this game really shines. It is incredibly polished and fluid. The levels are pretty linear and set up like your typical arena battles. As you enter a room and demons spawn you are on the move and do not stop, cause if you do the game will make you pay for it. Bust just running around shooting everything is not going to have you win the battle. You have to be a lot more tactical and strategic on how you eviscerate each enemy. Ammo, armor and health are sparse so you have to be surgical as you attack. Using your chainsaw to get ammo, flame belch to light demons on fire for armor and glory kills for health. As you are running, jumping, dashing your way through the room cycling through these and your weapons might seem daunting but all moves so fluid and automatic that it is often explained as creating your own symphony of destruction. The game has its secrets to unfold which are not terribly hard to find but add something great to the replayability of the game in terms of “cheat codes”, for example turning on unlimited ammo. One nice thing is that using them does not affect progression. They even have the full playable versions of the OG DOOM and DOOM II games. 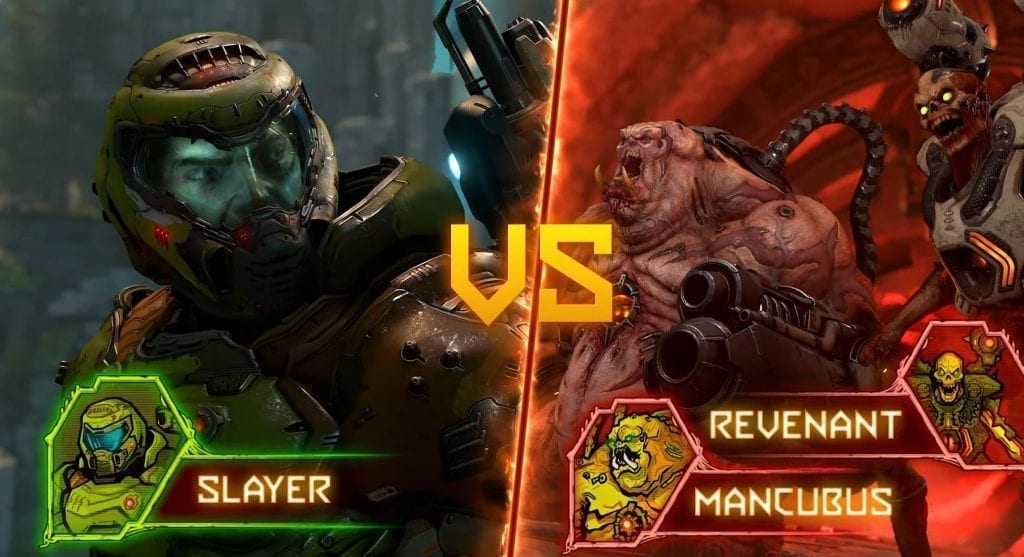 Doom Eternal has gone in a different direction than its predecessors and has tried something unexpected by coming up with a new multiplayer mode. Instead of going with the usual types of team deathmatch and king of the hill, it has launched BattleZone. This mode allows the player to choose between being a slayer or a demon. The game puts a slayer against two demon players. The demon players have abilities of the demon chosen as well as the ability to spawn in lesser demons to help with the battle. But strategy must be used as the slayer can simply use these lesser demons to replenish armor, health and ammo. 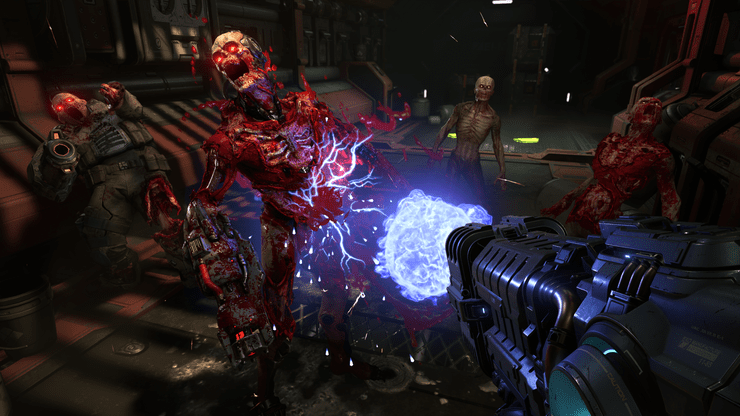 From the gorgeous skyboxes, fluid movement, insane combat, and newly added lore, Doom Eternal is a game that should not be passed up. The list of improvements over previous editions puts itself at the top of the class and shows how ID as a developer continues to prove itself and one of the top. In a time where we expect games to be released as Beta versions, DOOM is polished and relatively bug free in a sense that shows what a real release should look like. Head over to DLCompare to check out what your favorite retailer and others charge for DOOM Eternal and pick up a copy today.