'Destiny' Is ‘World Of Warcraft,’ And The Live Service Looter Race Is Ending

'Destiny' Is ‘World Of Warcraft,’ And The Live Service Looter Race Is Ending

Destiny has won the live service looter war and we are going to see far less competitors in the genre in the future.

If you know me and the games I play, you’ll know that I’m Mr. Live Service Looter, as if a game has loot and a roadmap, I’m there. But juggling all these games has become close to impossible, not only for me, but for the industry itself, it’s starting to seem.

The current situation in the looter genre reminds me of what we saw with MMOs years ago. World of Warcraft was dominating the market as the industry standard, and big companies started pouring out massive budgets for new titles trying to catch it. Nothing ever did. Warcraft was king and was never dethroned. Many games flat out died trying to catch it, while others had to settle comfortably into lower tiers, and nothing would ever rise to WoW’s peak again. The same thing happened a short while later for MOBAs and League of Legends. The same thing is happening now for looters.

This time, Destiny is WoW. Destiny is League. Despite its problems, it is in fact the industry standard for the live service looter, and something these other games are trying to emulate. And for the most part, that’s not going well, and in fact, it seems like it’s going so not well that this era is coming to a close, to a certain extent.
Two of the highest profile games that directly tried to emulate Destiny from their initial conception are either dead or in trouble. 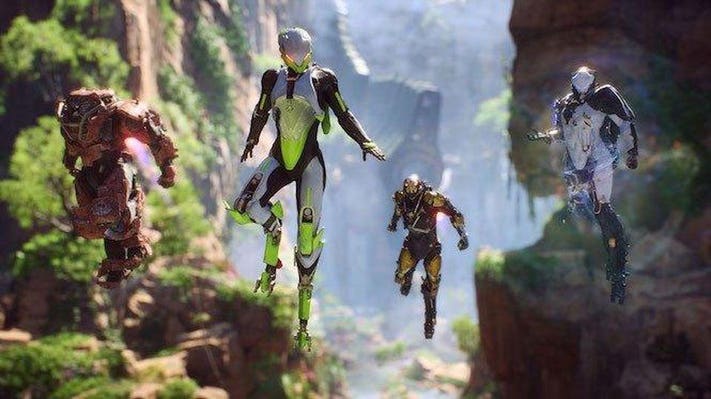 The first, of course, is Anthem, the massive cautionary tale about the perils of designing a looter that you launch with too many technical issues, and once those are fixed, too many systems issues involving loot, power and endgame. Anthem is currently undergoing a total overhaul, but only a tiny team at BioWare is devoted to it, and I don’t think anyone is expecting much from it. Everything we know about BioWare’s future plans outside of this small project is that they are returning to what they know, traditional Dragon Age and Mass Effect games.

Then we have Avengers, where Tomb Raider developer Crystal Dynamics decided to dive headfirst into a shallow pool and are learning the hardships that come with that decision was we speak. They did what Crystal Dynamics does best, create a killer single player campaign with good characters and fun gameplay. But now, moving into the “live service” aspect we are starting to see troubles both again, technical and systems-based, and it’s unclear if Avengers can recover from steep initial player drop-off, and its trajectory does feel more and more like Anthem’s with each passing day.
Even The Division 2 seems like it has a questionable future. This is a game I would say actually learned a ton of lessons from both other games and the original’s initial struggles. But it underperformed for Ubisoft and despite a decent content roadmap this last year and a half, the future of the franchise remains uncertain as Ubisoft may funnel that money into other, more reliable IPs in the future.
What will survive? Borderlands, which has leaned less on live service tropes and is a lot more of a traditional video game than something trying to emulate Destiny, even though it was Destiny which took a lot of loot lessons from Borderlands initially. This is a game that has a linear, lengthy campaign and then releases big, meaty DLCs like it’s 2010 again. This has worked for Borderlands for three mainline games now, and I expect it to work for a fourth in a few years. Similarly, we will see games like Warframe continue to truck along with their dedicated fanbases, even if they never reach Destiny size. Diablo 4 will of course be a hit, provided it ever arrives given the current issues plaguing Blizzard.
Destiny, at this point, feels like it’s going to be immortal. If not immortal, a series that runs for 10-15 years at the very least, given that we’re already entering year 7 and there’s three more years of content planned already . It is constantly changing and adding content and reinventing itself to keep things fresh and while yes, a part of being a Destiny player is complaining about something or another at any given time, Bungie has effectively “figured out” this model. Compare Destiny’s breadth and pace of content and loot and worlds to its rivals. There really is no competition on many fronts, and again, it’s king of this genre to a point where it’s going to start actively discouraging competition, and other developers will simply move on rather than try to compete.

I am not saying that games are going to stop having “live service” aspects to them, but I am saying that we are probably not going to see any more big publishers say things like “make me Destiny, but with superheroes.” Even games that appear like they would be competing in this genre, Outriders for one, make it seem like no, despite having loot and leveling, they’re not trying to be live service or an “ever-evolving world.” It’s just a game. Buy it, play it, move on. Godfall feels like it could end up being one of the final tests of this movement, and I remain somewhat shaky about its prospects. But we’ll have to see.
I feel like if Avengers had to do it over again, Crystal Dynamics just would have committed to a solid, superhero brawler campaign and not promised the moon with years of characters and content afterward. I feel like if Anthem had to do it over again, BioWare probably would have just made Mass Effect 4. I just don’t think you’re going to be seeing these kinds of high profile Destiny competitors en masse anymore, as the war is over, and those resources are likely better spent elsewhere than risking them walking the incredibly perilous tightrope of making and maintaining a live service looter.

TL:DR the war is over Destiny won

I guess you can say that but I would argue more that the genre died. Both MMOs and MMO-Lites (or looters as this article states) are currently two dead game genres. Destiny 2 is king due to the fact of it’s loyal fan base rather than the quality of the game. I’d like to see the population stats of when Destiny 2 was released vs now. Or even to see how many will be playing Beyond Light after a month.

Anthem and Division 2 are were both released 2 years ago with no other titles even entering the Looter / MMO-Lite category.

Sadly, the shift went towards Battle Royale titles. The true king is Fortnite, that’s the game everyone is chasing now. Battle Royales are cheap and easy to make and just make bank. That will last a few more years until the next genre comes.

What does “live service looter” even mean?

I’m assuming it means they keep the Destiny 2 engine but add / remove content on the fly.

Man, I wish someone would drop a good MMO. There are some promising options out on the horizon though.

No mention of Warframe.