The next chapter of Destiny 2 is due to be unveiled later on today, but pre-order pages have appeared on the Microsoft Store unveiling the new chapter as “Shadowkeep”, and revealing details of pre-order bonuses, a Deluxe edition, a release date, and a sneak peak at what the DLC will include, of course. 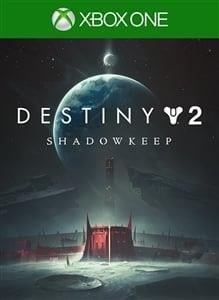 “Shadowkeep” will not require players to own any of the previous Destiny 2 expansions to either purchase or play the new content, which will include new missions and quests, a new location, a new dungeon, a new Raid, and new weapons and gear. The brief description of the storyline describes a new nightmare on the Moon:

New nightmares have emerged from the shadows of our Moon. Called forth by haunting visions, Eris Morn has returned. Join her to slay these nightmares before they reach out beyond the Moon to cast humanity back into an age of darkness.

Players will be able to purchase “Shadowkeep” as a separate expansion or as a bundle with the game itself. Although the pre-orders are not yet live, those who later pre-order the standard edition of the expansion will get a bonus Two-Tailed Fox Exotic Rocket Launcher and an “exclusive” Hive-themed Ornament. Those grabbing the Deluxe Pack will also get the “Digital Deluxe Set”:

*Season Pass redeemed when logging in. If players already own the current Season Pass, they will receive credit toward future Seasons up until Season 11. Any credits beyond Season 11 will be exchanged for an equivalent value of Silver.

Those players who don’t yet own the game can instead purchase a bundle that includes the game and the “Shadowkeep” expansion. All pre-orders of these bundles will allow immediate access to the game, “Curse of Osiris”, and “Warmind”, although you’ll have to wait until September to gain access to “Shadowkeep”. The standard edition also includes a single Season Pass that is redeemed as soon as players log into the game. The Digital Deluxe Edition also includes the “Digital Deluxe Set”.

The store pages reveal the expansion is due to be released on September 17th. More details are due to be revealed today at 10AM PT, and we’re expecting the pre-orders to go live immediately after the reveal — we’ll update this article with links to those when that happens.

I’m assuming all Destiny players have to purchase this expansion, right? If so, how much?

Dont know if thats just shadowkeep or season pass too

I’m a bit confused about that. It sounds like the DLC and 1 Season (or event) to get started. After that you would need the season pass. That’s if I understood that part correctly.

You can pre order right from the director in destiny2 it’s $35 for Shadowkeep -and $60 with season pass which is all of year 3 content…or $0 and you can play the ftp version (no story or Shadowkeep or raiding).

Only part I don’t get is:
*Season Pass redeemed when logging in. If players already own the current Season Pass, they will receive credit toward future Seasons up until Season 11. Any credits beyond Season 11 will be exchanged for an equivalent value of Silver.

Does that mean I don’t buy the new season pass because I have the current pass?

I am going to wait until we figure that part out. Is there any advantage to pre ordering?