We’re not normally cynical around here, but the timing of these two DEAD OR ALIVE 6 events seems pretty convenient. We’ve just received word of a demo coming soon amid a new controversy around its suggestive content.

Let’s start with the sauciness. As reported by VG24/7, the Japanese Evo esports tournament had to temporarily close its stream because a Dead or Alive 6 promotional segment got too raunchy for air. Firstly the promo’s demonstration of the game’s free-camera photo mode just happened to be during a paused pile-driver animation that looked a lot like something else. The spirit of this video is certainly not safe for work, even if the content possibly is — it’s hard to see the several seconds of zooming and pivoting as some sort of accident though.

There’s certainly no question that most work places would frown upon what happened next, as the promo’s two female presenters showed off their real-life equivalent of the series’ notorious body physics. The stream temporarily went down during this presentation. Evo director Joey Cuellar briefly apologised for the event on Twitter though the tweet has since been deleted.

Many have pointed out the irony of Evo not wanting to show sexually suggestive content when it shows excessively bloody violence on a regular basis, but while all eyes were on this new Dead or Alive conversation at the event, KOEI decided to drop the news that a Dead or Alive 6 demo is on the way. 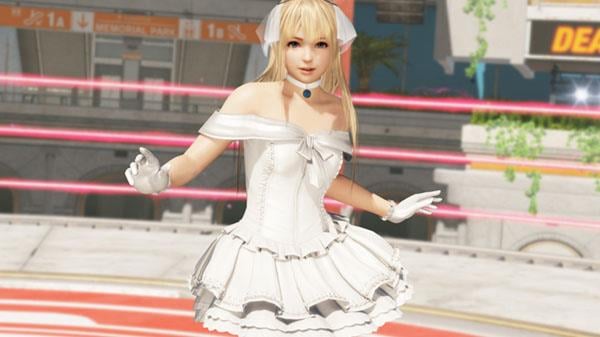 According to Gematsu, the “Deluxe Demo” will be exclusive to PlayStation Plus and Xbox Live Gold members from February 22nd through to February 24th. Online Ranked and Lobby matches will be available as well as Free Training, Command Training, the Tutorial, the Combo Challenge and an introduction to the Story Mode. All 24 launch characters will be available in the demo, as well as all of their hairstyles and glasses.

The press release also announced that The King of Fighters XIV character Mai Shiranui (above) will be joining the roster in June as a paid DLC or as part of the Season 1 Pass. Another King of Fighters character will be added too, but their identity remains a mystery. The Season 1 Pass will include three costume packs as well: The Dead or Alive 6 Happy Wedding Costumes Vol. 1 Pack and the Dead or Alive 6 New Costumes Set Volumes 1 and 2 — as well as additional costumes for the two new characters.

How do you feel about the controversy? Will you download the demo next weekend?

How do you feel about the controversy?

Calculated PR move? “Our game is so suggestive that we canceled the stream early.”

I mean, this is the franchise that let you play bikini dress-up complete with jiggle physics.