Cynical beer drinker that plays music and plays the first bioshock at least once every year.

Yo! I’ve been thinking I’ve missed the old gaming forums that I was a part of in my teens, and you guys seem cool, so sup.

Back in the day I used to make bad machinima with my old halo 3 “clan” team timeout. None of our output was impressive to anyone over 14 but we had a blast and I’d say that was the reason i didn’t have a “crippling need” for booze until I was “16” hahaha

My favorite video games for multiplayer are the big supported shooters. Halo MCC and modern warfare mostly. Back in the day I played a shitload of CS:GO and got really good. but I didn’t like the troll I became. But I like booting it up for laughs. Other than that I play a lot of single player stuff. I loved loved loved Doom Eternal! Action RPGs like the old Mass Effect trilogy, and platformers like Rayman Origins/Legends and the beloved Shovel Knight. KING AMONG THEM Bioshock. That game is ace. I play it all the time kind of like how I imagine acid chompers watch fear and loathing in las vegas except with beer.

The only thing that sucks is I won’t be able to game too much with anyone because I’m temporarily living with the folks who got SATELLITE FUCKIN INTERNET hahaha. Coronavirus hit for me right when i broke up with my long term gf in a high rent area. just bad luck. no big though. life is much better now!

Lastly, I play music. You guys like Hardcore? Metalcore? Mathcore? Bands like Botch? Every Time I Die? Converge? Poison The Well? Well I’m the drummer for a band called The Fahrenheit Drill. I used to also be the vocalist but decided I wanted to focus on writing drums since that’s where the main synergy lies with my musical partner. check it out if you want, chances are if you’re not into very aggressive music you won’t like it but that’s ok! We’re on all the streaming shit and bandcamp here: https://thefahrenheitdrill.bandcamp.com/ (Ugly is the newest thing, demo is pretty rough)

Anyhow, look forward to BSing with the forums, and I’ll likely join the discord at some point! I mostly play on xbox these days so add me on there.

Welcome to the asylum… i mean community.

We are planning a Halo 5 night coming up so be on the look for that. Other than that we have COD parties nightly so don’t be a stranger. Unless your playing with @Lala_Calamari, that’s his fetish. We don’t judge here in GRG.

Nice! I’d be a part of those game nights if my internet wasn’t a bottleneck. but I’m working to rectify that every day haha

no problem. We aint going anywhere. Not like we got anything better to do.

We got a lot of people playing CoD and Destiny at the moment as well as various other games. Tonight is our Community Night and we’ll have a few groups out playing various games. We will have a a custom room for CoD going where @beers_and_leafs comes up with Sandy vag match after sandy vag match. Make sure to sign up for that if interested.

I added you to my XBox friends list as well as sent out a GRG XBox club invite.

also got you on the forum group @XBoxGamers

We have more groups here:

as sent out a GRG XBox club invite.

welcome to grg! I’ll def check out your music too. Like a variety of music and you never know unless you listen.

Welcome and I will definitely check out your band. Metalcore is my favorite genre!

Metalcore, hardcore, whatevercore is not an approved GRG music genre. Don’t blame me, blame @Grex. He is the one that set that standard. 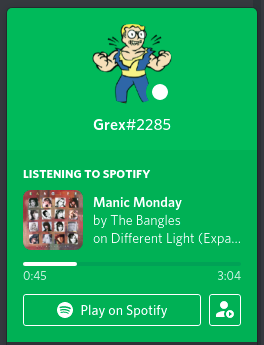 Good thing we don’t care about your standards.

Like I said only the special get sent here lol

Welcome. More of a porter or dunkel guy myself. IPAs are too hoppy for me.

I thought hillbillies only drank moonshine from Uncle Jesse’s still???

Good thing we don’t care about your standards.

He is the one that set that standard.

Sounds like you are judging. That is a violation of our TOS which results in a extension of your GRG contract.