After launching one of the best Call of Duty games in years,
Sledgehammer Games is continuing with the (expected) task of supporting
the title with the game’s first bit of DLC, “HAVOC”.

As always, keep it locked on TA for further news and updates as they become available.

The “HAVOC” DLC pack for Call of Duty: Advanced Warfare is set for a January 27th launch.

so whats the new mode???

Isn’t the new mode “exo Zombies”?
That Core map looks like a re-make. They need to bring back a re-make of Fog w/Michael Myers field order best evar.

One of the maps, I think the carnival one has a kills team that goes out and kills for you.

Is there a vid for this @beers_and_leafs ? I don’t see any official ones on YouTube

I can’t find a video anywhere either, but I found this info.

GameStop has posted a listing on their website for Call of Duty:
Advanced Warfare’s Havoc DLC, and in the listing have confirmed the
official descriptions for each of the maps included with Havoc DLC.
Get ready for Havoc, the first downloadable content pack
for Call of Duty®: Advanced Warfare, featuring the all-new Exo Zombies
co-op experience, the all-new versatile AE4 directed energy assault
rifle, the AE4 Widowmaker custom variant, and four new Multiplayer maps,
tailor-made to unleash your exoskeleton’s power.

Core: Deploy to the Gobi desert where the ravaged ruins of a
nuclear fusion plant set the stage for a high-octane warzone. Take down
enemies through the wreckage in long-range combat or get up-close and
personal in the tunnels surrounding the central turbine. Activate
decontamination drones using the map-based scorestreak to help clean out
the competition.

Urban: Prepare yourself for brutal, high-speed combat in
Dallas Ward 3, a future mega structure, funneling players into a
close-quarters free-for-all. This modular compound’s verticality
unleashes the exoskeleton’s capabilities. Stay focused during the timed
event as blast doors alter the map’s flow and sightlines.

Sideshow: In the shadow of Devil’s Tower, Wyoming, this
abandoned motel’s open layout amplifies its creep factor. Blast your way
through the clown inn with close-quarters battles or use long-range
site-lines from the mining facilities and natural terrain. Use the
map-based scorestreak to activate the lights, music, and magic of the
clown marquee and rain down a barrage of rainbow smoke-trailed
cannonballs.

Drift: An idyllic ski resort high in the Rocky Mountains is
transformed into a festive high-altitude playground, perfect for an
all-out firefight. Make your way to the highly contested overwatch
position in the glass observation deck or take a ride on the carousel to
deliver 360 degrees of carnage. Players can use the map-altering timed
event to their advantage as an avalanche of snow and debris disorients
players, intensifying the battle.
Exo Zombies:

Get ready for a new breed of Zombies. A DNA bioweapon unexpectedly
spawns a bloodthirsty, ravenous mutant horde infecting an entire secret
Atlas research facility and sending personnel running for their lives.
Following a failed evacuation, four survivors, un-trained and
underprepared, must face the most vicious mutations ever unleashed. The
unique Exo Zombies co-op experience is all-new to Call of Duty: Advanced
Warfare DLC. This new mode brings the movements, abilities, and weapons
of the exoskeleton into battle against the undead.

The map pack was officially announced by SHGames
earlier this week following the promo poster leak by GameStop as well.
Havoc DLC will be available January 27th first on Xbox Live with other
platforms to follow.

I think zombies is ok . I get worse at it as the waves advance. The only one I really played a lot was Call of the Dead (George Romero one) from BO1

Are people really still playing this game? I have tried to like it, but again there is so many WTF moments, it drives me nuts.

It’s a good game IMO, no spawn issues like Ghosts.
You can still get spawn trapped sometimes which brings on the rage but overall I like this title.

Zombies was the main reason I played the earlier COD games, and played them a lot.

I gotta agree with @deSoldier2001 this is a good game and generally it is better then the Las couple COD’s for sure.

yep, i enjoy it. still havent played the campaign. the xo abilities had me hooked for awhile. kinda bored with it now but im kinda set in my ways as the class i use… but Autos are king. game is too fast for snipers or single shots IMO.

A new video details the Havoc DLC’s four new maps, new weapon, Exo
Zombies, John Malkovich, Bill Paxton, Rose McGowan, and Jon Bernthal.
In the video you will learn about the maps titled Sideshow, Drift,
Core, and Urban. Each has its own special map specific dangers. You will
also learn about the new weapon the AE4 directed energy assault rifle,
which you don’t have to reload, but does have the potential to overheat.
Finally, you will get to see some Exo Zombies in action with John
Malkovich, Bill Paxton, Rose McGowan, and Jon Bernthal as Atlas
employees trying to survive a zombie onslaught.
The DLC will be available first on Xbox Live on January 27. 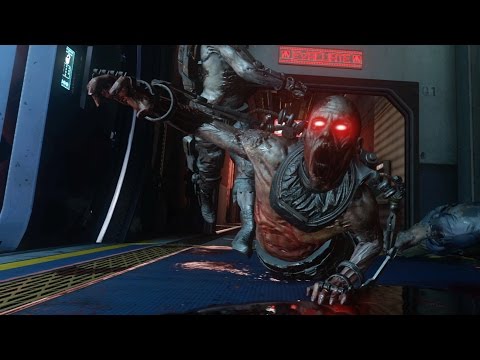 so we dont get DLC till feb 27th on PS? yeah thats only a few weeks before battlefield… dont think ill be playing this in Feb…

plan on getting the season pass and can’t wait to see the widow maker. only thing is i have gotten to used to the exo boost. now i keep trying to do that in other games out of habit

we got destiny DLC so it balances out.

Honestly, I’m glad I get to see reviews and what not before I purchase the DLC. I’d 100% buy it without thinking about it if PS4 got it first.

When the DLC hits I’m going to try some zombies for shits and giggles if anyone wants to co op.