Batman’s getting married and he picked the wrong best man 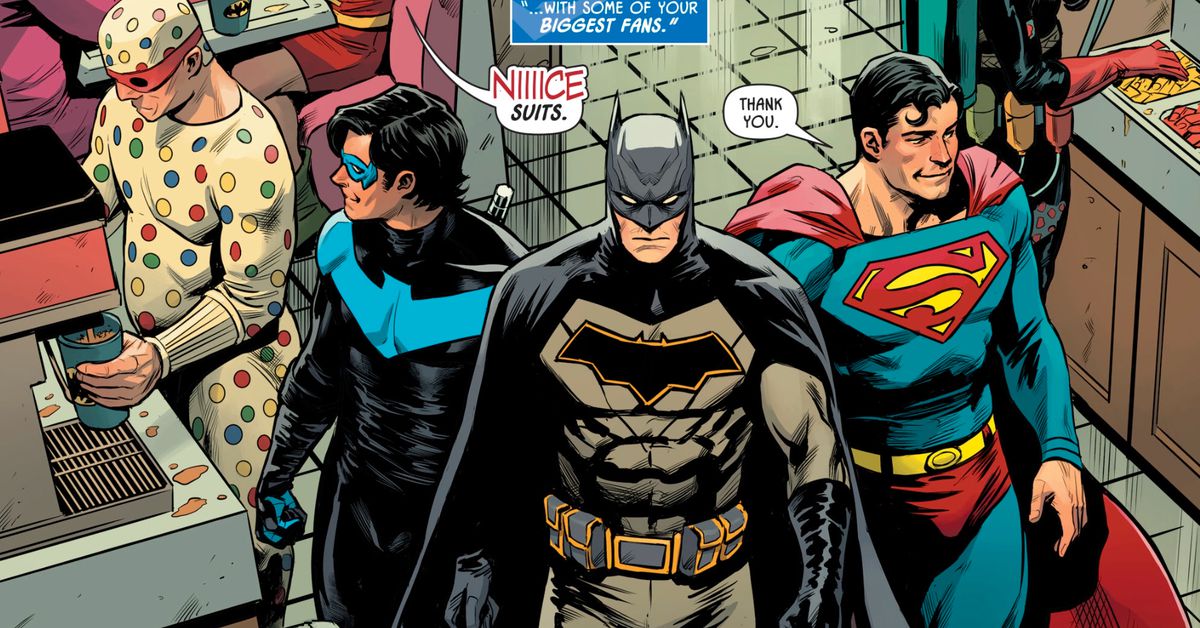 Batman’s getting married and he picked the wrong best man

Between the Dynamic Duo and the World’s Finest, the choice is clear

Batman and Catwoman are getting married this summer. I’m generally in favor of this plot development, even excited about it.

But this week’s Batman: Prelude to the Wedding: Nightwing vs. Hush #1 contains the most outrageous editorial decision the Batman office has made since Batman died while trying to shoot a gun at a god. And it’s transformed me from a level-headed critic to an old auntie who holds a three-decade grudge over “What they did to Our Richard.”

[Warning: This post contains spoilers for Batman: Prelude to the Wedding: Nightwing vs. Hush #1.]

WEDDINGS ARE NEVER SIMPLE
Especially when one of you is a world-famous thief and just got out of being wrongfully convicted for two hundred murders, and the other has a son from a previous union with a world-class assassin who only became a baby momma in the first place so that the kid could be raised to serve as a host for his own immortal granddad’s consciousness.

Picking a best man is an important choice, even in normal circumstances, and people are often worried about the feelings of whoever they didn’t pick. But even in a social environment where the Joker is likely to show up and try to murder everyone you know, I don’t think there is a bigger mistake possible than making Superman your best man over Dick Grayson.

LET’S LOOK AT THE EVIDENCE, BATMAN
Exhibit A: Superman took you to a fast food restaurant for your bachelor party.

Exhibit B: Nightwing came up with the idea of that crime-free pocket dimension fishing trip that you liked.

Exhibit C: When Hush, your childhood best friend-turned-plastic-surgeon-turned-supervillain-who-operated-on-his-own-face-to-look-just-like-you showed up to crash the party, Nightwing was the one who risked his life to chase him into the space between dimensions.

And then you looked right into those baby blue eyes and told him that your best man was going to be someone other than himself, the first Robin, who you raised from his teenage years to adulthood as a surrogate parent.

And, OK, you picked Superman, who — I have to admit — is a solid choice for keeping the wedding free of interruptions (a major concern), keeping the rings safe (he owes you big time for keeping that kryptonite ring all those years) and giving a good speech at the reception. He’s going to do an adequate job under trying circumstances.

But no matter how much Batman: Prelude to the Wedding — Nightwing vs. Hush #1 wants to frame Batman and Nightwing as friends who’ve drifted apart, their relationship is more than that. More than a first surrogate son and the first member of the wider Bat-family, Dick Grayson was Batman’s first partner, half of the Dynamic Duo, a partnership that’s nearly 80 years old.

Bruce, I can’t believe what you’ve done to Our Richard.

And, OK, you picked Superman, who — I have to admit — is a solid choice for keeping the wedding free of interruptions (a major concern)

If somebody has a tiny green pebble he can’t help at all.

Wouldn’t it be a little awkward to have your former boyfriend (or statutory rape victim) act as the best man at your hetero wedding?

And this is why I prefer Marvel.

I’m a big Batman fan, but I heard about this arc and immediately thought, WTF!!!?!!!