Community guide to cut down the time it'll take to find all of the hidden cache locations. Help me locate them all. If you find a hidden cache in a map that hasn't already been found, please give a 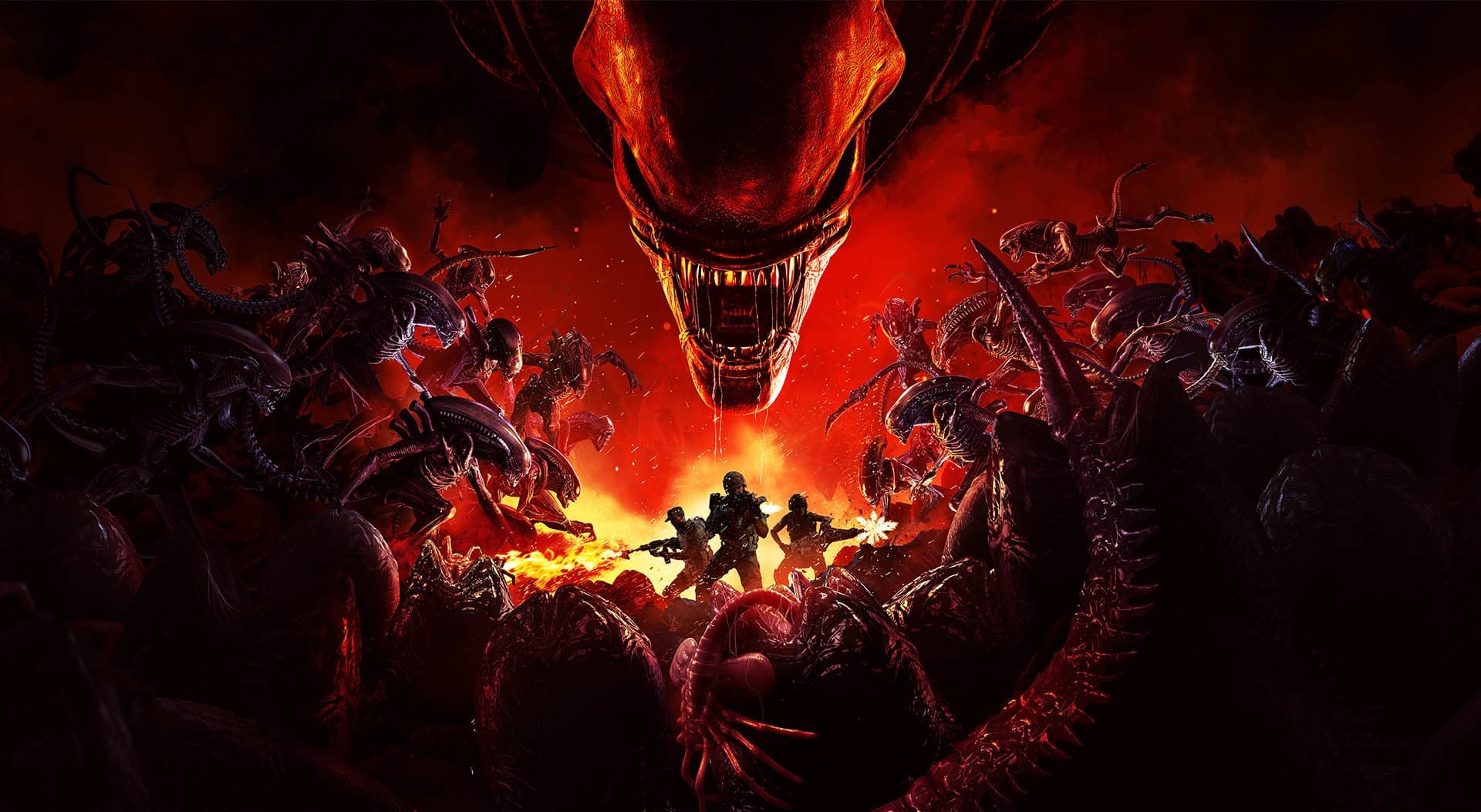 If you are looking for all Intel in Aliens: Fireteam Elite, here's a guide where you can find all of them to further expand the Alien story. 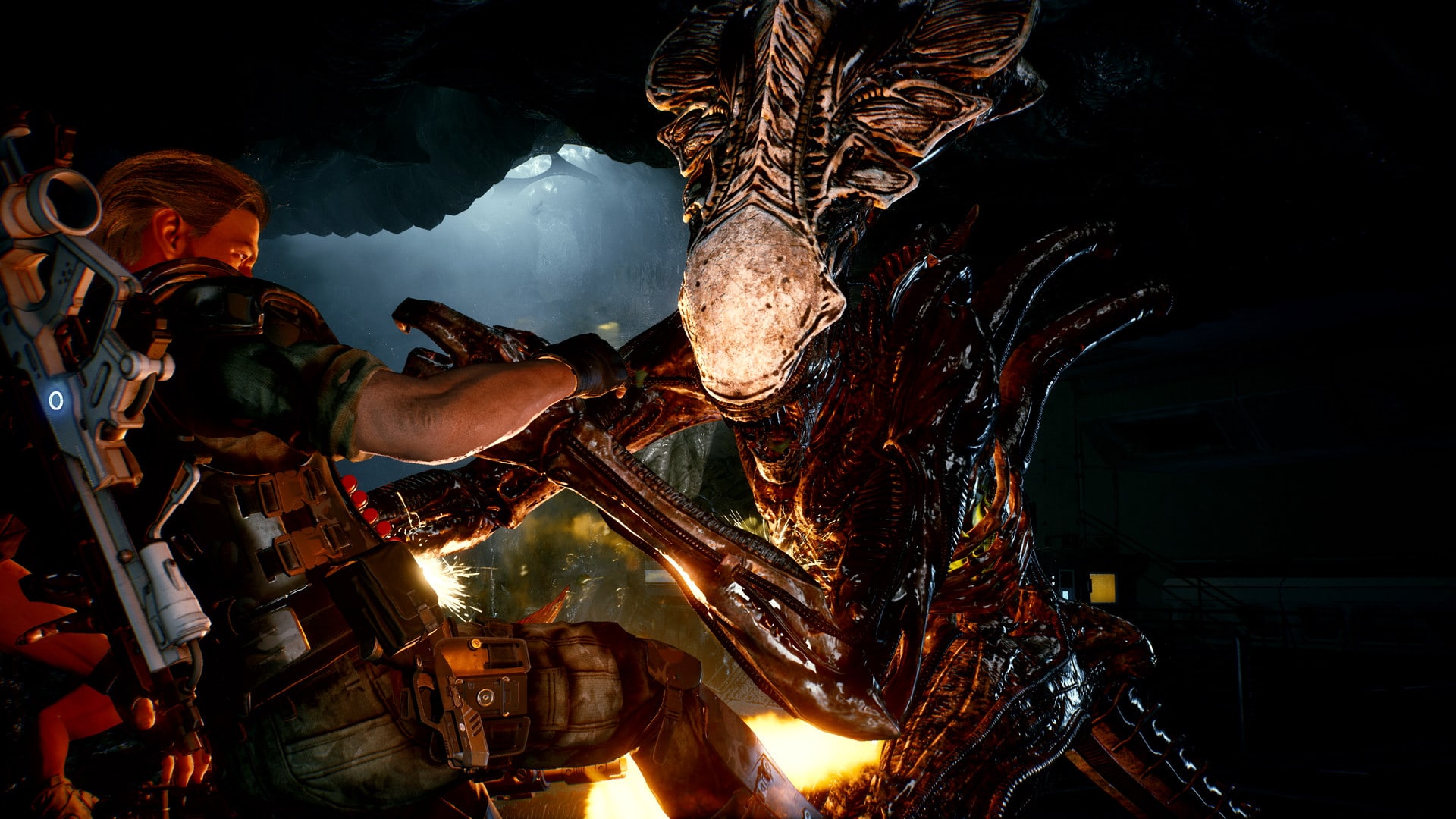 We have implemented the following changes: 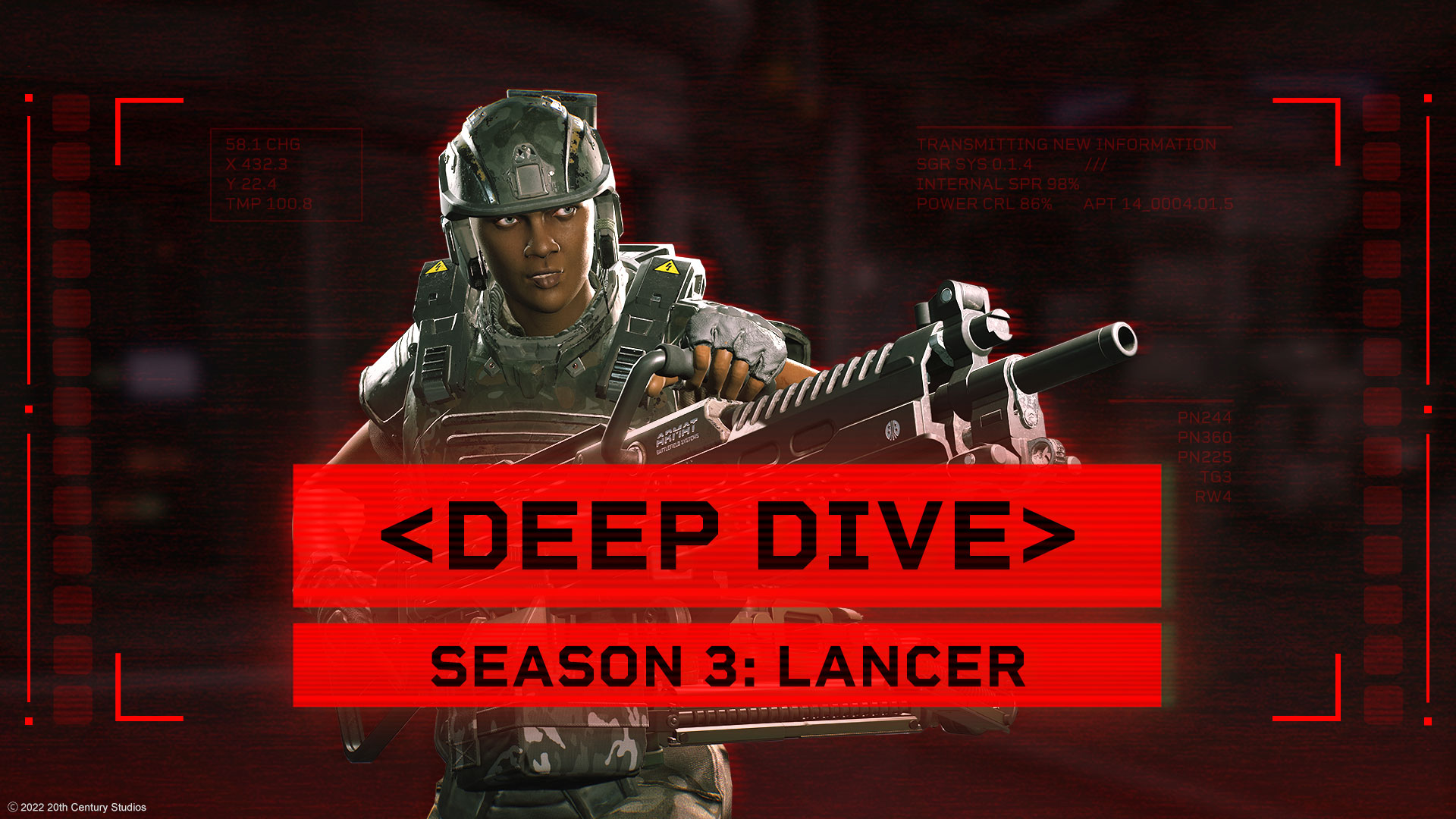 The Season 3: Lancer update brings a veritable armory of new content, and to walk us through the new additions, we’ve invited our Design Devs. 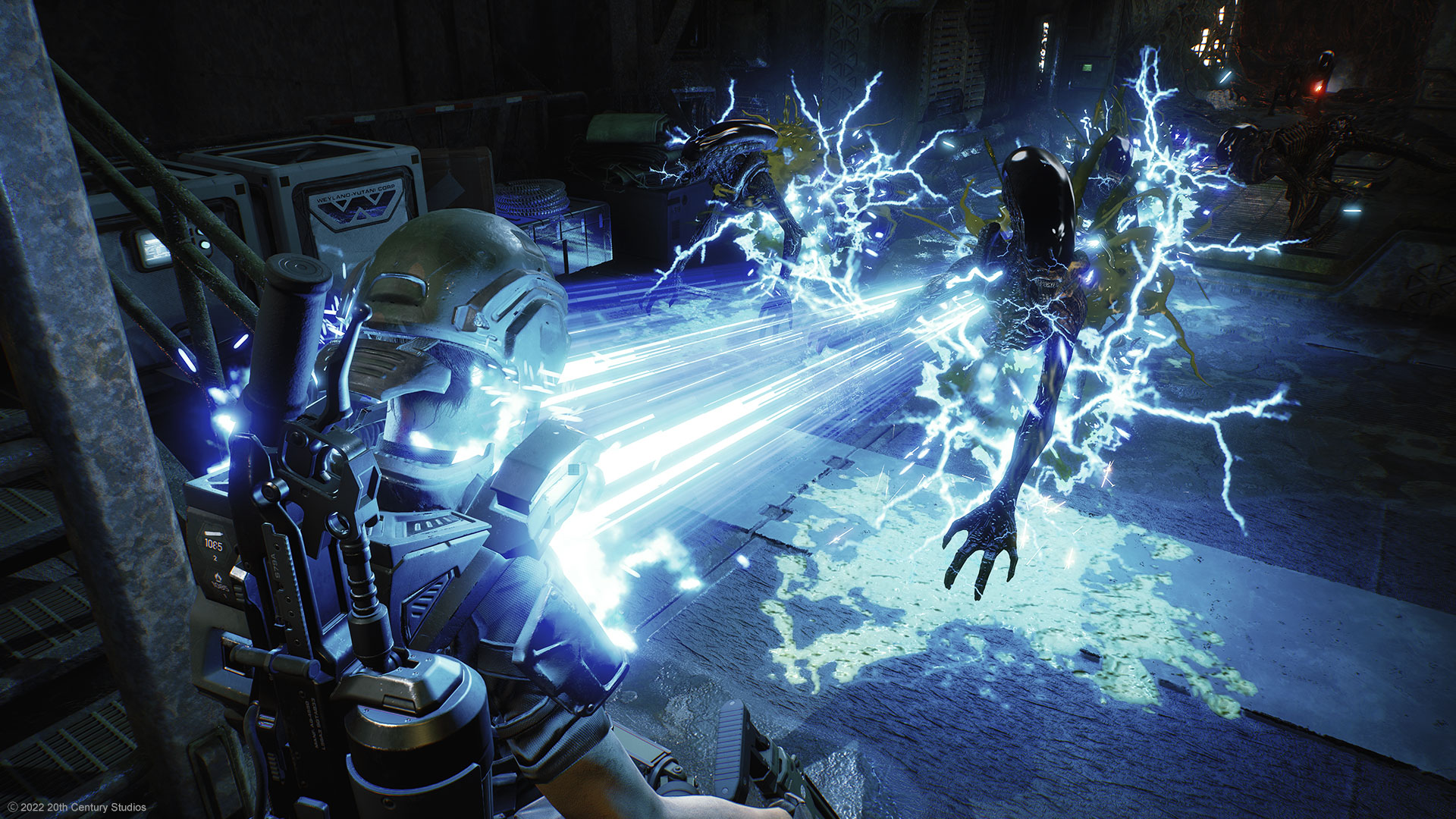 The Season 3 update adds the new Lancer Class Kit, available to all players as soon as they get the update. This is the second Heavy weapons Class Kit added to Aliens: Fireteam Elite, following the Demolisher, which brings new abilities that open up unique playstyles for the game.

“For the Lancer, we wanted to provide a second kit with access to heavy weapons but that provided different gameplay options from the Demolisher. Where the Demolisher focuses on rapidly dealing with swarms of enemies, we wanted the Lancer to lean into standing its ground and dealing with larger foes. Both of the Lancer active Abilities push in this direction. Particle Lance hits extremely hard but covers a narrow area, making it perfect for maximizing damage on a single target. The second Lancer ability, Onslaught, slows movement speed and fire rate, but increases damage and temporarily removes the need to reload - allowing you to put out a punishing amount of damage wherever you focus. Finally, the Overwatch ability is what really emphasizes the Lancer’s “hold your ground” playstyle. It stacks a powerful set of buffs while standing still, but those stacks fall off while moving.”

“To help further differentiate the Lancer’s gameplay, we wanted it to have access to different secondary weapons than the Demolisher. After some testing, we went with the CQW slot, which grants the class a variety of tools for dealing with enemies that get too close. Pairing hard-hitting CQWs that typically need lots of reloading, such as the M37 Pump Shotgun or the new X1 Fireball, alongside some of the longer range Heavy Weapons, such as the new M41E4 Heavy Pulse Rifle, allows the Lancer to deal with varied threats quite quickly via effective use of the Onslaught Ability.”

Fires a penetrating beam in front of you, damaging all enemies in its path. The beam passes through all foes but is blocked by any terrain.

This Ability can be customized with its two Replacer Perks:

You can further customize Particle Lance with these Ability-specific Perks: 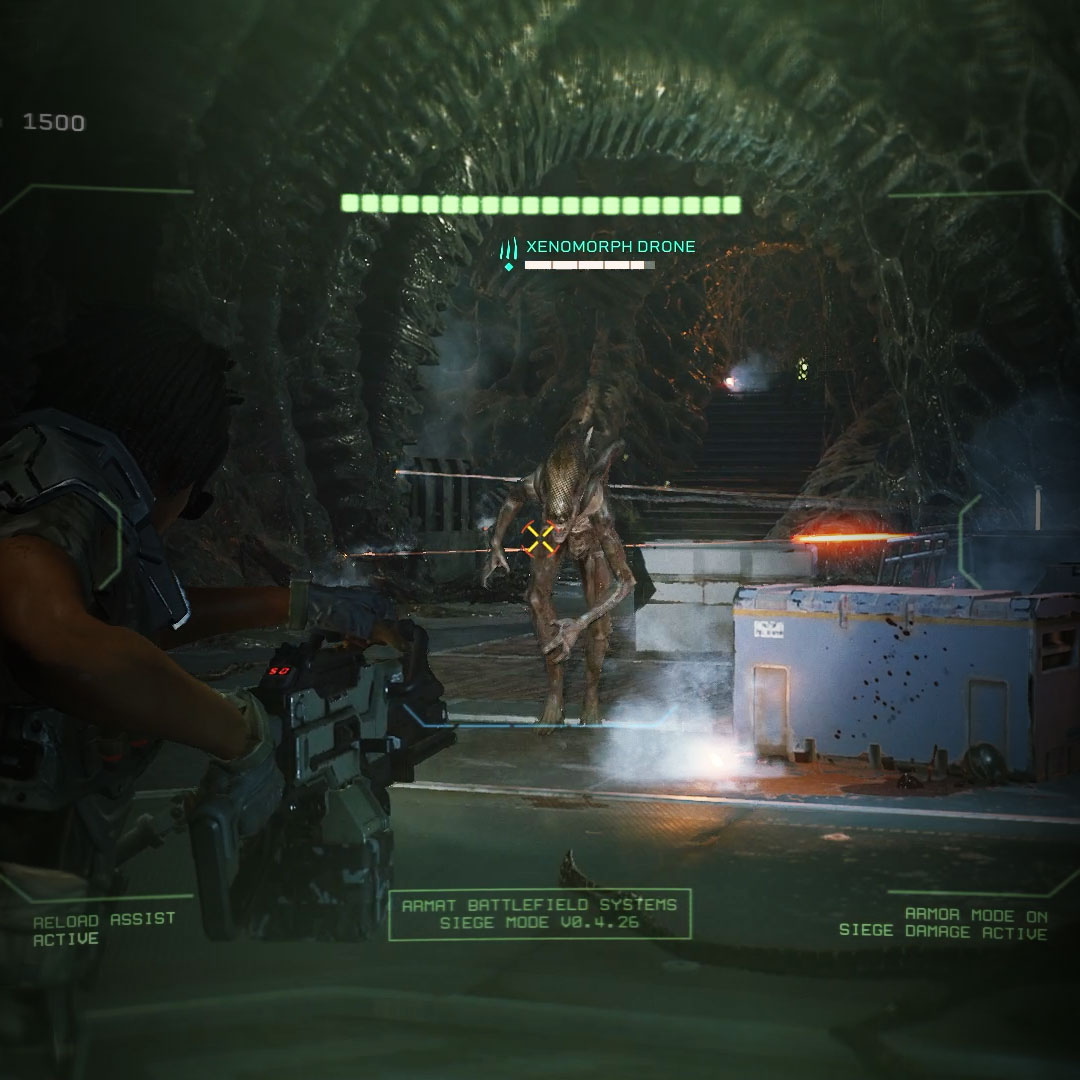 "Onslaught is the second active Ability for the Lancer, leaning into the fantasy of a resilient, one-Marine artillery machine. "

Immediately reloads your current Weapon, then slows your Movement and Fire Rate by 20%, while increasing your Weapon Damage and Damage Resistance by 20%. Your Weapons automatically reload after every shot for the duration of the effect.

Customize Onslaught with these Ability-specific Perks:

“We really wanted to emphasize the Lancer’s “Hold your ground” playstyle, which is why Overwatch will quickly generate stacks while standing still or in cover and lose them when you’re moving around. The Perks that affect Overwatch make it stronger and offer some nice quality of life bonuses; such as increasing the window of time before stacks start falling off and gaining maximum stacks when you activate an Ability of choice.”

Customize Overwatch with these Ability-specific Perks: 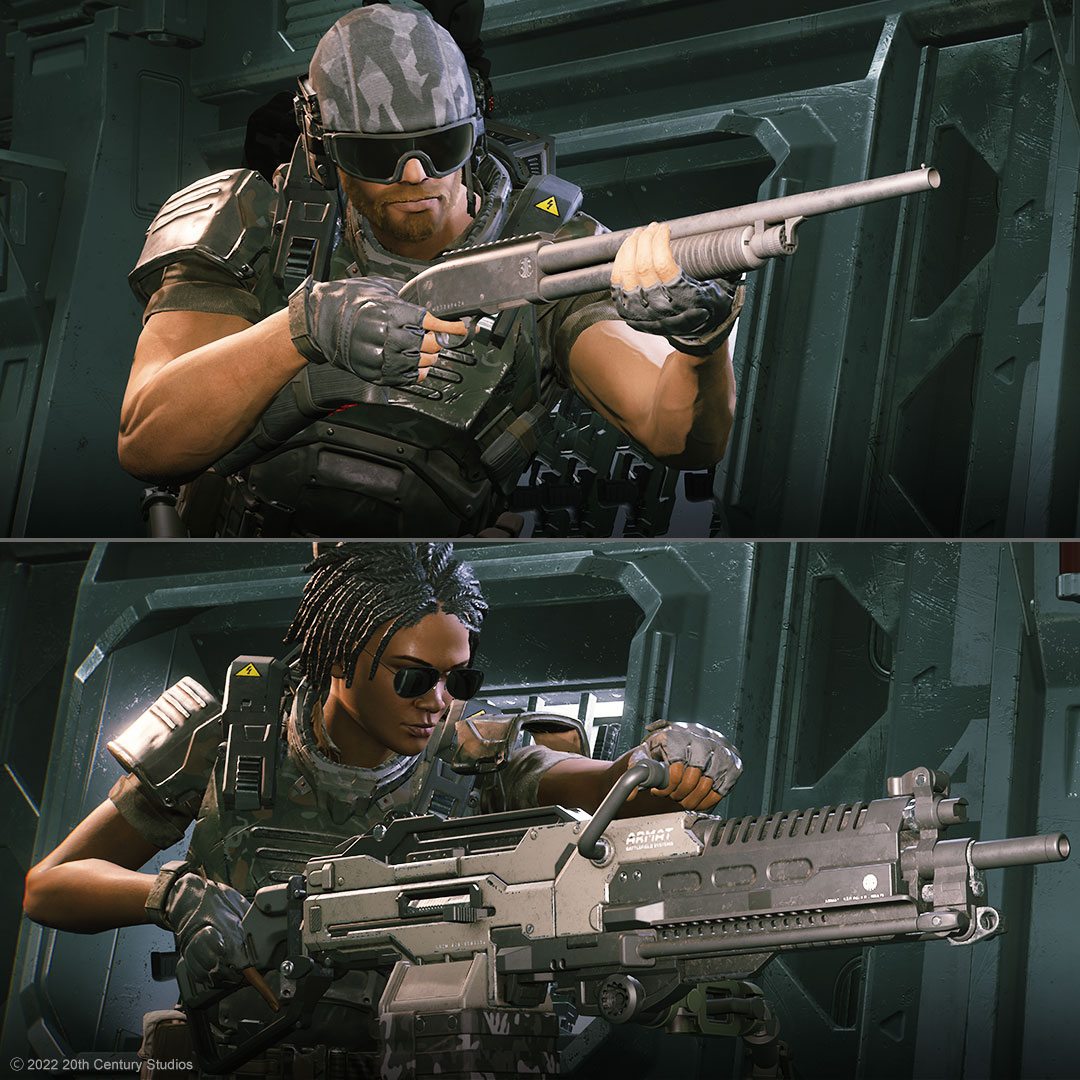 “Lancers can equip CQWs and Heavy Weapons, giving them access to some extremely powerful weapon combinations. There’s a lot of slower, heavy hitting Weapons and higher Fire Rate Weapons to choose from. Whatever ends up being your favorite mixes of the two, the Kit also comes with a suite of new Perks to support both Weapon types.”

“When you’re trying to lock down an area you’ll likely be dealing with many high threat targets. We’ve given the Lancer many defensive tools so that they’re able to do just this. You’ll be able to gain defensive bonuses against enemies while you are in cover, against melee attacks, and hazards from said enemies. Even if you end up taking some hits, you’ll end up shaking some of it off with health recovery perks. Meanwhile, perks like Back Me Up, offer a damage boost for your teammates while enemies are attacking you so that they can help keep enemies off of you.”

Unlock additional Lancer Perks for further customization of your playstyle and experiment by mixing and matching with other Classes: 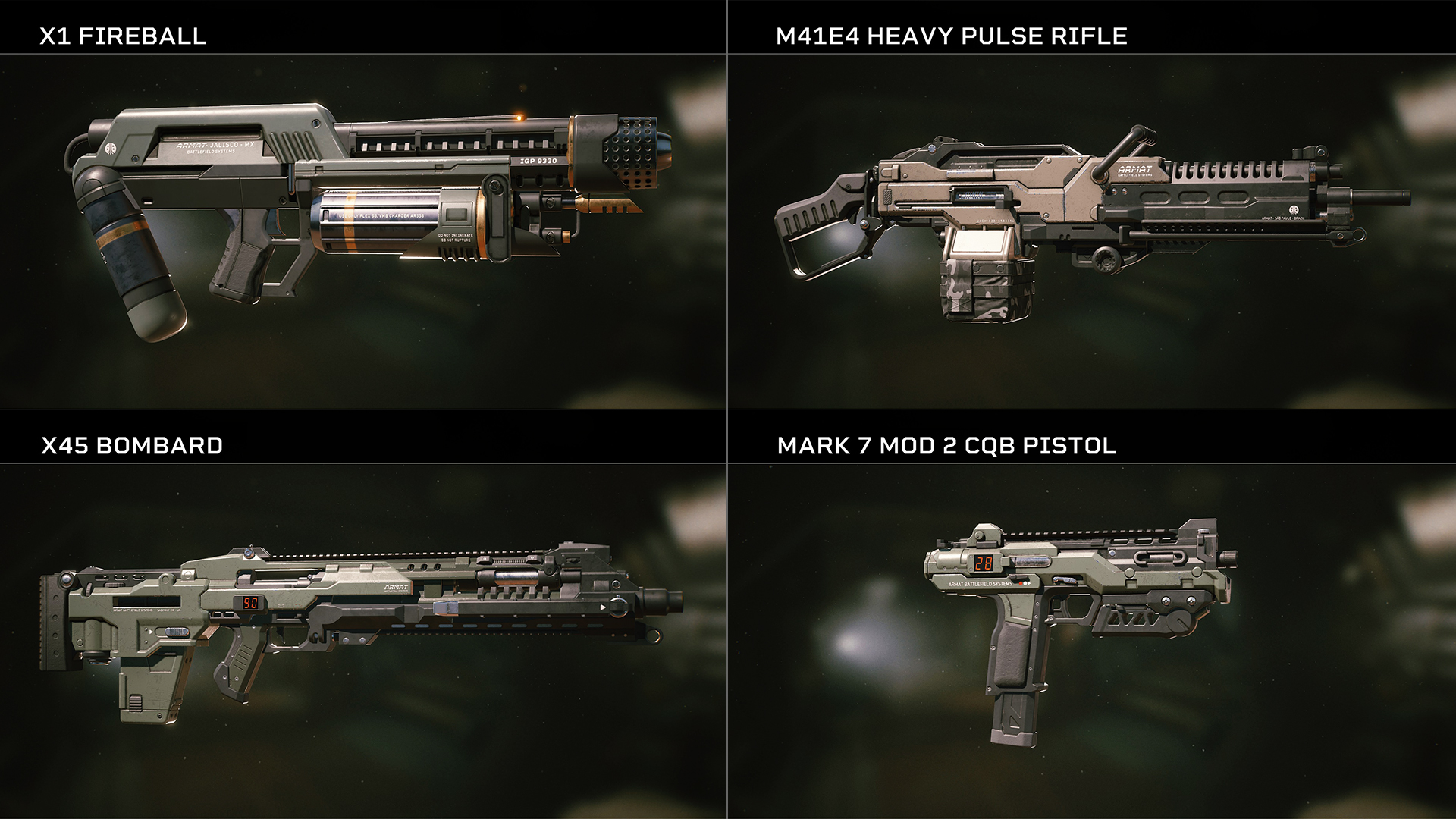 “With Season 3 we will be introducing 4 new Armat Weapons, one of each type. As always, we want these guns to provide a different and varied gameplay feel from existing weapons within their categories. Some achieve this in very obvious ways - the X1 Fireball is the first projectile based weapon outside of the Heavy category. Others are more subtle - like the X45 Bombard Flechette Rifle, our second 4-round Burst DMR. It provides faster and more accurate shooting than the M41A3 Burst Rifle but isn’t quite as effective at longer ranges.”

“We look forward to players finding the best situations to use these weapons, and the new loadout possibilities these bring to the game.”

All four of these new weapons are available for purchase from SSgt Park’s Armory for Requisition Credits. 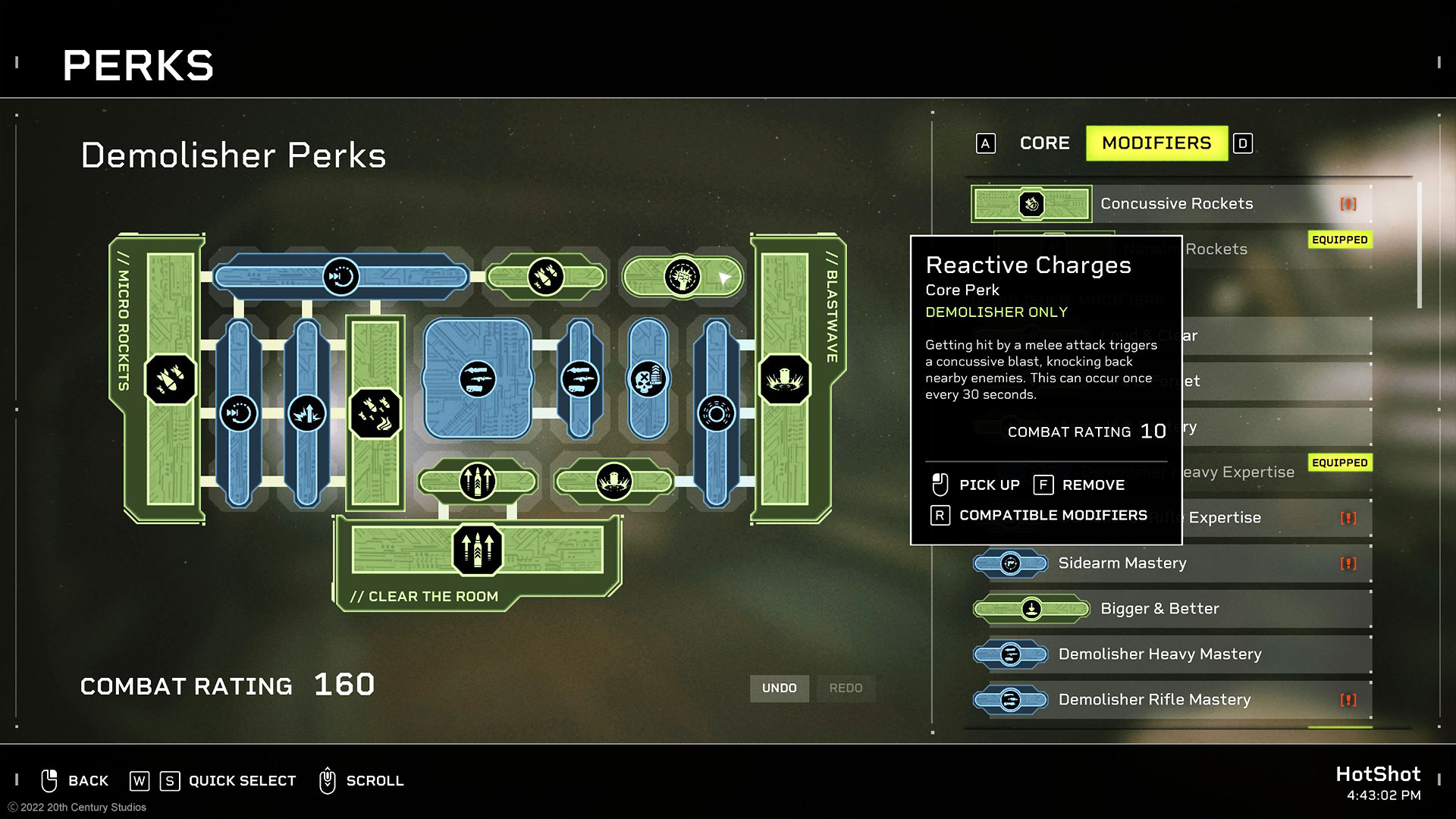 “For the upcoming Season 3 Perks, we took a look at our current Kits and wanted to add a handful of options in places that they were lacking. As examples, Demolisher is getting a couple of defensive options and Doc is getting a couple of offensive ones. We also wanted to make sure these new Perks fit thematically with their respective Kits and that the gameplay aligned with their playstyles.”

“Other than the Kit-specific Perks, we’re also adding a couple of Kit-neutral Perks. These Perks can be equipped by any Kit and provide more generic benefits. We’re always looking into ways that we can expand options in the Perk boards and this was one that we were excited about!”

This season we’re adding a whole new set of Perks for all existing Classes. Aside from the 23 new Perks added for the Lancer Class Kit, we’re also adding 2 new Perks for each of the other 6 Classes and 3 more neutral Perks that are available to all Classes. 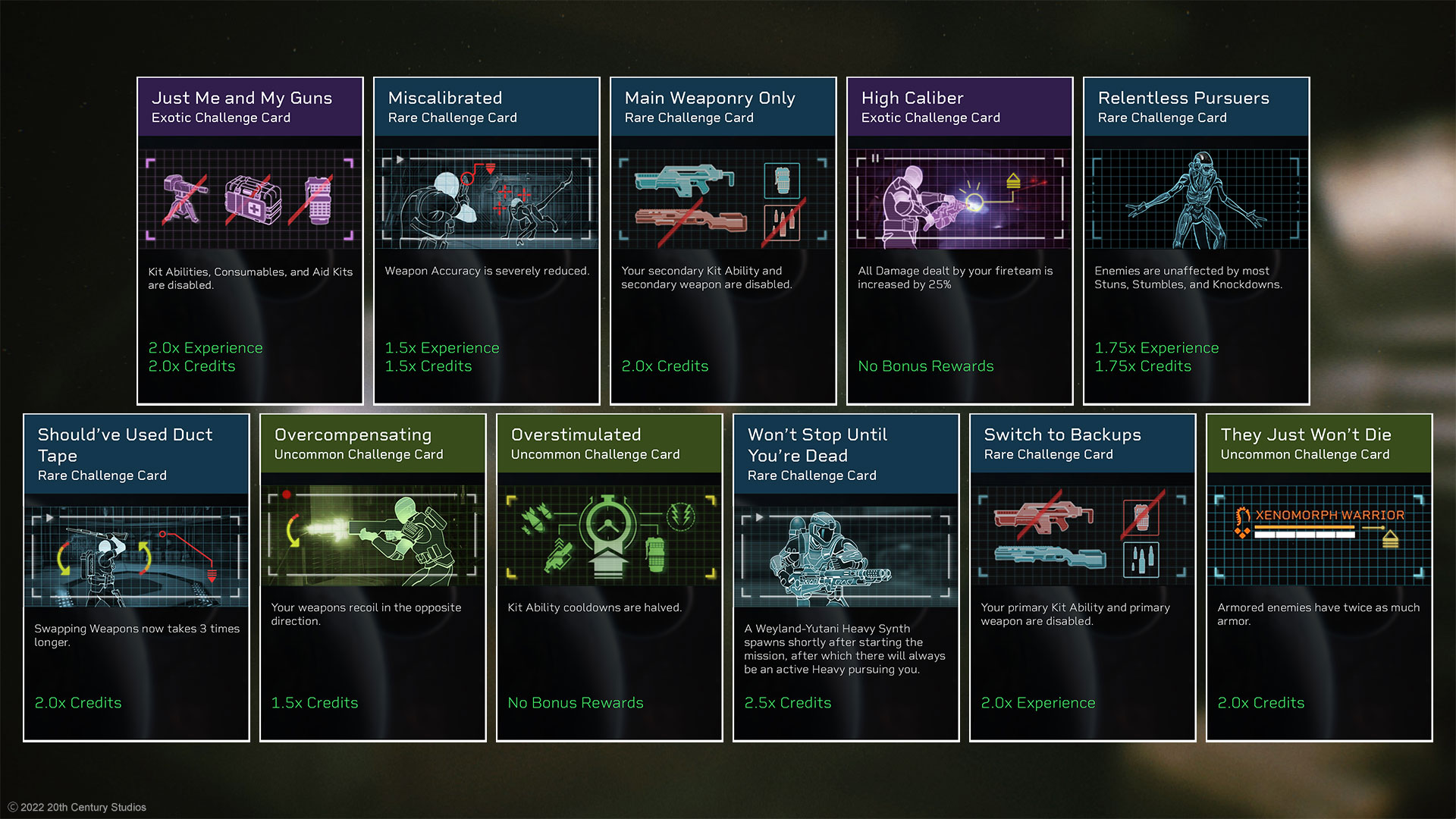 “We’re continuing to add Challenge Cards to spice up gameplay for those who want something new while also offering ways to boost yourself up and take down harder content.” 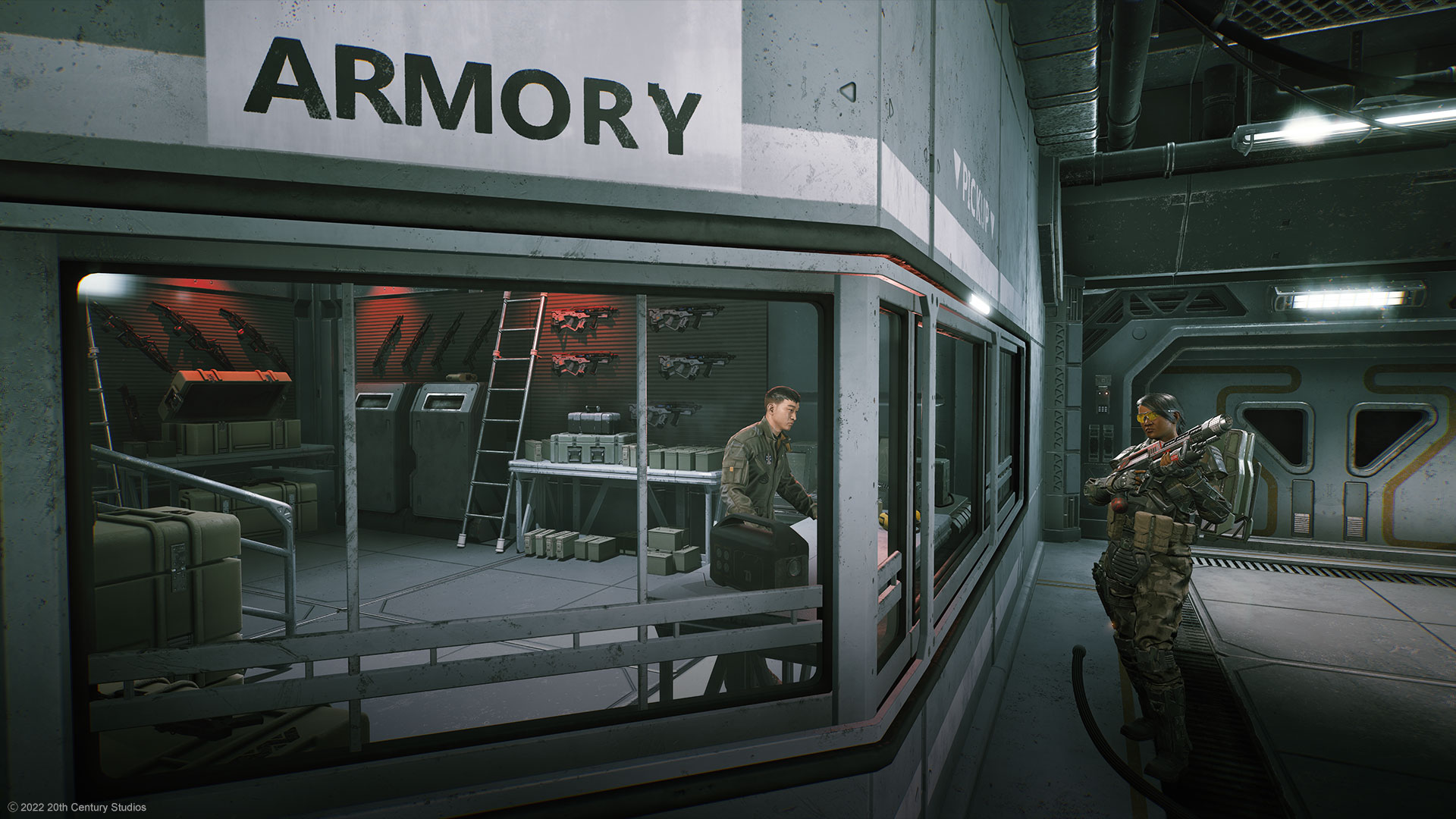 Use that stash of Requisition Credits and Reputation Scrip you’ve been putting aside at SSgt Park’s Armory to unlock all four new Armat Weapons, the BiMex Polarized Filters and UACM Cover Head Accessories, the Frontier Filigree and Mesh (Arid, Badlands, Steppe, Taiga) Weapon Colors, the United Americas Flag and ICSC Decals, and the Cry, Dance - Jig, Too Many, Pose - Casual, and Putting On A Show Emotes. A selection of brand-new Perks detailed further above will also be made available. 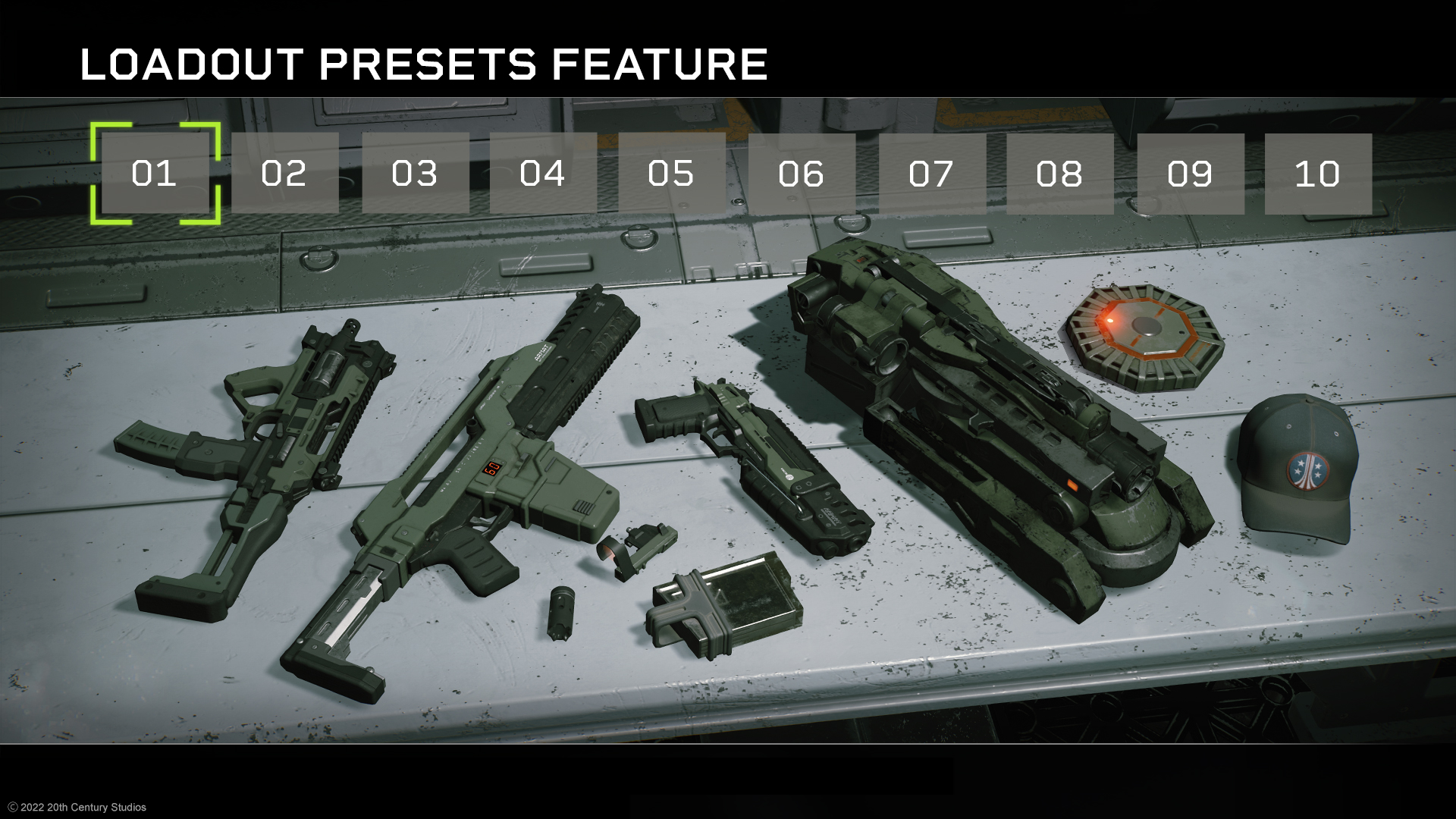 Season 3 also introduces the much-requested feature to save multiple Loadouts of your Kit, your Perks, and your Weapons using the new Presets feature.

“Our characters have lots of customization options - including your kit, which guns they use, the attachments for those guns, and the entire perk grid. For many situations in our game, swapping some of these out makes a lot of sense - different weapons for Synth missions, or maybe a different ability focus for Horde Mode. We wanted to make it easier to be able to swap around your gear, and not have to remember “which was my favorite for this mode?” every time you go into it.”

“With Presets, you can name each one and customize them to be what you need for whatever situations you normally find yourself in, allowing you to quickly get into the action instead of spending time between missions reconfiguring your loadout.”

This feature will automatically become enabled with the Season 3 update and will enable the following Presets:

With this update, a new tutorial will be available to walk players through this feature. At any time, you can create a new Preset with your own custom name for any of the listed sections or delete an older Preset you no longer need.

Patch notes at the bottom! 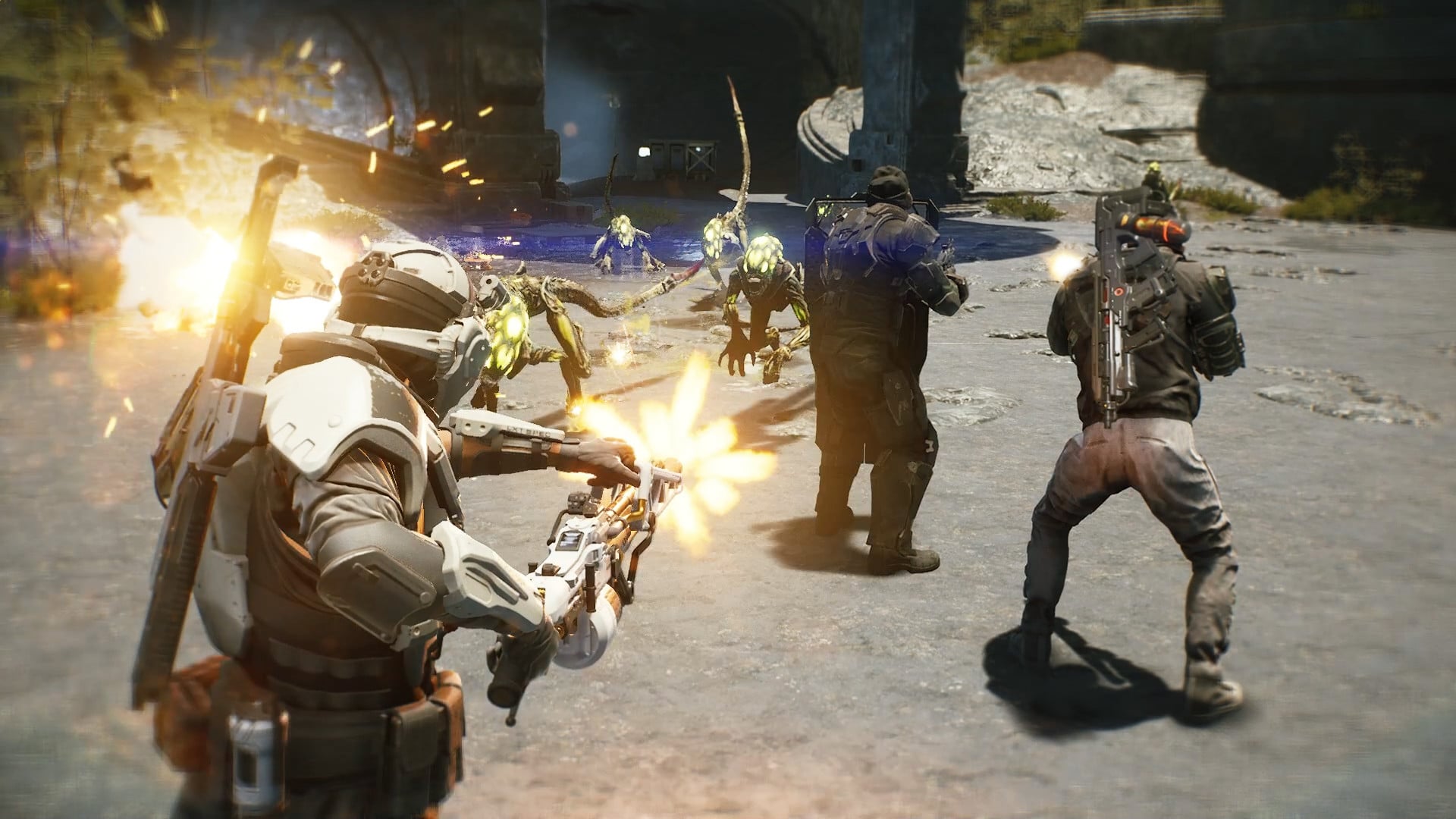 Here are the complete Aliens Fireteam Elite update 1.22 April 19 patch notes, released for Season 3: Lancer and other changes and fixes.

Season 3: Lancer is here, and with it we’ve introduced a new Class Kit – Lancer, a new Loadout Presets feature as well as new weapons, cosmetics, and rewards to unlock in-game.

Owners of the Deluxe edition will also receive the third of their four DLC Packs with the new UACM Frontline DLC Pack, detailed below.

We have implemented the following changes:

Now available in-game for all owners of the Deluxe Edition or for individual purchase for $9.99.

Note: The following balancing changes have been made to Weapon Attachments. “Proc” refers to the random chance of bonus effects provided through some Attachments and Perks.

Armatures: Bracing Armature: The Max Ammo stat on this attachment has been increased to 25%.

That’s it for this latest patch for Aliens Fireteam Elite. Stay tuned here at MP1st for more updates!