7 Days to Die - Welcome to the shit show

Bit of a preamble: I’ve had this domain for over a month and it’s not because of anything GRG-related. I’m embracing it, though. It’s on my resume and everything.

The 7 Days to Die server is up and running. Default difficulty, random terrain. The only tweak was enabling airdrop beacons because fuck searching square kilometers of terrain for something that might not exist. Max player count is 8. That’s the “official” default max but others have several times that so we’ll just wait and see if we get anywhere close. Invite your friends. Invite your family. Invite people you hate (and then spawn camp them). I may end up opening it to another community as well, just to provide more potential for player interaction.

If you want to play, there’s an easy way and a hard way. Either way, the password is “grgshitshow”

Hard way: plug shitshow.systems into the ip field and 26900 into the port field.

I’ve fought with this the past few hours. I may play for a bit but it’s about time for sleep.

I would be down for 7 days. I was a kickstarter for it and haven’t played it since the day I got it. Watching Neebs Gaming play it on Youtube has made me want to play but I didn’t want to start a solo game.

Cool beans. I’ll see what I can do tonight. Then we can all rage at the cliff racers vultures.

On a spectrum from “I’m an actual baby” to “I regularly eat glass and want the game to make me call it daddy”, what kind of difficulty would people want?

I am cool with the base difficulty to start. Not sure if you can change it later or not.

OP has been updated. I’m keeping the connection details all in one place for when we inevitably stop playing down the line. I don’t want to get into a D1G situation where people hop into Discord and ask about why the four-year-old Arma Exile server isn’t working.

I will give this a whirl when I get back next week.

If you can play singleplayer (even if it’s kind of laggy), multiplayer should perform better. You’re offloading map gen, AI, and some other stuff to the server.

Ok, I’m loading the game again. I got it on sale a couple of years ago, but I couldn’t figure the damn thing out.

Word of warning. You are going to die and loose stuff. Don’t be frustrated it’s going to happen.

Just got some decent loot. Chilling in a house with no door but nothing is bothering me. I turn my flashlight on for 2 seconds and bam Zombie horde up my ass.

I am holed up at Traitor Joes. I have been looting the buildings inside his walls. Zombies have been forming outside the walls. I may just stay here.

Let me know how that works out for you.

Pretty sure they aren’t going to leave Dig.
Also, I hear they get rowdy at night…

Pretty sure they aren’t going to leave Dig.

Oh I know they aren’t leaving. I have made my way out and found a house. They are rowdy at night but not Day 7 rowdy. 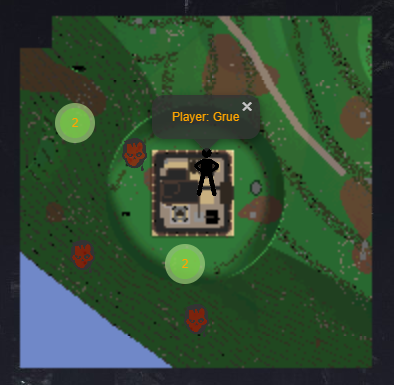 This is now a thing that exists. It only shows mobs around you while you’re logged on. Since I added it after at least two of us started playing, the map is completely blank. What everyone did in game has not been affected and you don’t need to install anything.

I may disable EAC, however, if anyone has problems. Alt-tabbing out of the game for extended periods apparently triggers it.

Check it out if you so desire.

Might as well explain my comment from earlier for the benefit of anyone who hasn’t played much. Don’t hang out at the trader, hoping you can be safe all night. He kicks you out and locks the gate once night falls. If you’ve been hiding from a pack of zeds, you’re now out in the wilderness surrounded by zombies that have just learned to run.

I restarted the game process (and backed up our map while I was at it).

Forges get performance anxiety so don’t watch them when they’re smelting. Look at how much material you put into them, take note of how long each bit takes to smelt, do some multiplication, and then walk away for that amount of time. Opening and closing the forge interface does bad things. I had 300 something iron and 20 clay but the forge wasn’t seeing the clay that was inside it for the purposes of making a cooking pot. After the reboot, it turns out I only had ~50 iron and 15 clay.