Our exclusive Xbox Gameplay Chart remains one of the only charts out there that documents how many people are actually playing the games – a fair representation of the games that are actually capturing gamers’ attention, rather than what a shrinking proportion of them are buying at brick-and-mortar stores. 2019 marks the first full year of the Chart, and so we decided to cap it off with a Chart covering the whole of 2019 to work out who really came out on top. As you can see from the Top 40 below, premium games actually released in 2019 utterly failed to keep up with the games-as-a-service competition, in a year mainly notable for its blockbuster absences.

Chart information is copyright TrueGaming Network. For details on how the chart is calculated, click here.

While Apex Legends has certainly impressed by being the only 2019 game to put a dent in the Top 10, and in the number 2 spot at that, it’s worth pointing out a couple of bits of context. If you combined play across all versions of Minecraft , Microsoft’s veteran blocky simulator would actually slip past Apex into second place – the game is only hampered by its many discrete versions, though many of them now have cross-platform play. The other telling aspect is just how big the gap is between position one and position 2 – like it or not, Fortnite enjoyed almost double the player share of its nearest competitor . In fact, Fortnite’s final tally wasn’t far off the total 2019 player counts of both Apex Legends and Minecraft combined.

The significant absence of hotly anticipated blockbusters was really felt in 2019 compared to 2018, where the likes of Red Dead Redemption 2 and Assassin’s Creed Odyssey made a big dent in the supremacy of long-tail games. It’s easy to see the difference in release calendars, given that both of those games remain in the overall top 40 this year – Red Dead 2 only just missed out on the Top 10 for the whole year, while Odyssey slipped into the top 25.

In fact, the only other 2019 game to trouble the top 20 aside from Apex Legends this year was Call of Duty: Modern Warfare , itself still beaten out by the long tail of its predecessor Black Ops 4. The next nearest 2019 releases, Gears 5 and The Division 2 , have to make do with tussling it out in the second half of the top 40. 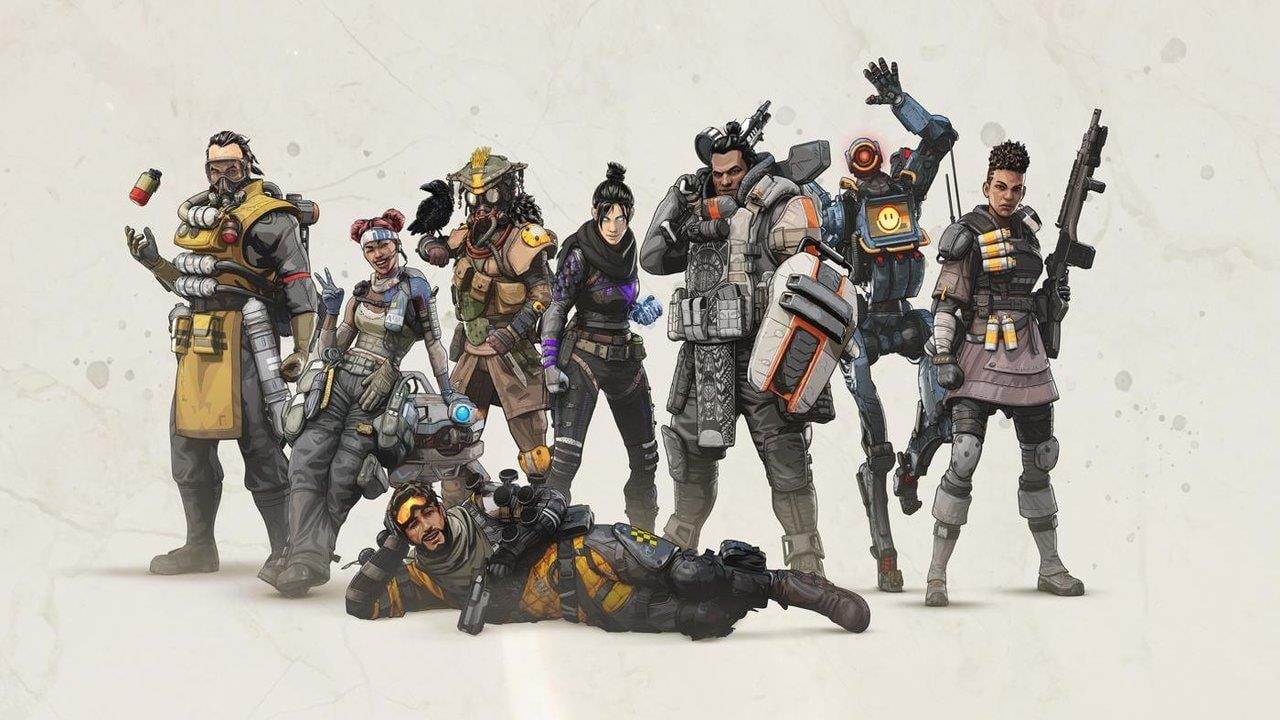 While it’s easy to bemoan the existence of Battle Royales and their dominance at the top of the industry, it’s not just a matter of genre. The top 10 has been occupied by a consistent but diverse set of games, only related in the fact that they have a lively multiplayer community and continue to churn out content – whether that’s the heists and operations of Grand Theft Auto V (launching today into Xbox Game Pass), or the steady drop of new maps and operators in Rainbow Six Siege, or the welcome inclusion of adorable bees in Minecraft. Even games that saw a lot of backlash from gamers near launch are enjoying a longer tail. Sea of Thieves and Battlefield V both managed to keep a steady player base throughout 2019, still placing in the top 20 by the end of the year. 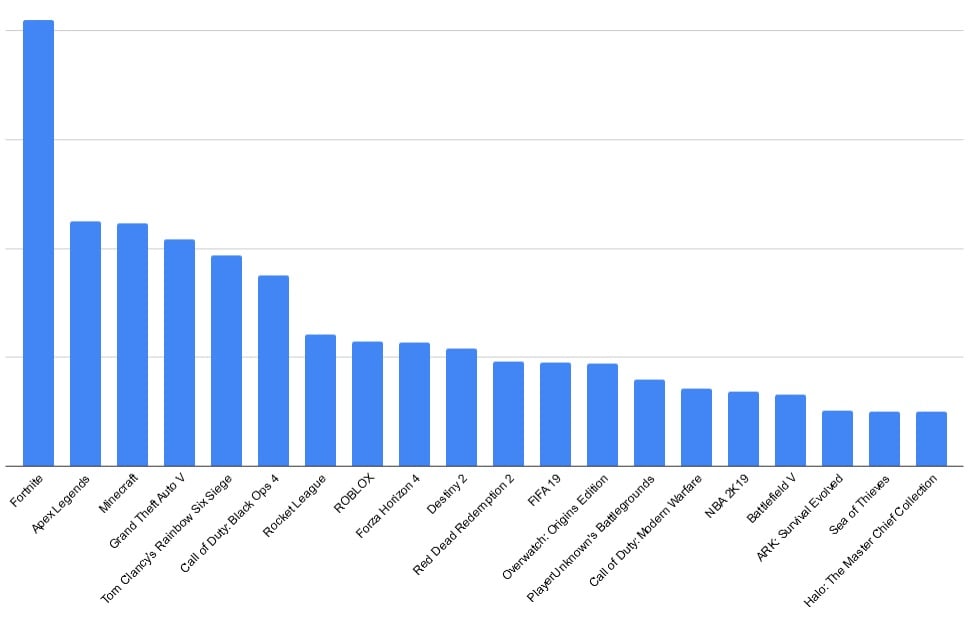 It is worth noting the considerable drop off in player count outside of the top six, though. Gears 5, for example, isn’t just relegated to the 23rd spot – it also only managed one tenth of Fortnite’s combined player share for the year. Naturally some of this will be due to timing – one could argue that Gears 5 has only had a few months of availability in which to compete. Regardless, it’s a bit of a sting to be so far behind major competitor Modern Warfare, let alone major releases from several years ago – it couldn’t even surpass its own predecessor, Gears of War 4, which is now over three years old. It’s not the only franchise entry that failed to topple an older sibling either – Black Ops 4 dominated Modern Warfare with over double the player share, FIFA 19 is 22 spots ahead of FIFA 20, and Mortal Kombat 11 is denied a spot in the entire top 40 by its four-year-old predecessor. Notable omissions from the Top 40 include the industry’s common 2019 Game of the Year, Sekiro: Shadows Die Twice, and the widely praised Control.

This trend towards continuous play of older games rather than picking up new ones isn’t unusual for the end of a console cycle. Ideas are generally getting staler as the full power of the current generation’s tech has been exposed, and consumers are likely starting to hold back their cash for new consoles of unknown potential – and unknown pricing.

But the decline in pickup for new games has been exacerbated by a changing industry – from games-as-a-service with a low barrier to entry and little to no cost, to the phenomenally reasonable offerings of Xbox Game Pass, it is becoming harder to justify those big release-day price points. Both in the games industry and outside of it, the temptation of paying an inconsequential monthly fee to be fed a stream of diverse content over time is taking firm hold of the population.

As of December 2019, we’ve doubled our sample size for the Chart to 2 million Xbox gamers to give an even better representative sample of the games being played on the platform. Will blockbuster launches like Cyberpunk 2077 and the imminent arrival of next-generation consoles finally shake up the top 10? You can find out with us every Monday in our weekly Xbox Gameplay Chart.

I’d like to see a chart of December only. Or this month.

Ask and he shall receive…

Yay for crack! I mean Ark